The workers protested against unreasonable rules, including a required three-day notice to take leave for a death in the family. 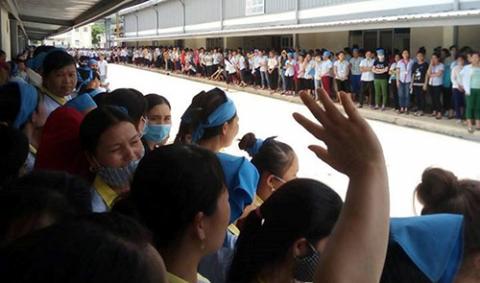 The strike carried over to Thursday, with workers giving the company a list of 14 demands. , VnExpress/Lam Son

About 6,000 workers at a garment factory in the northern province of Thanh Hoa have gone on strike to protest against its regulations, local media reported Thursday.

The workers claim that S&H Vina Co. Ltd., a garment company in Thach Thanh District, has treated them in an inhumane way, and many of its regulations are unreasonable and a burden to the workers.

The strike first started on Wednesday afternoon. According to some workers, after lunch they spread pieces of old fabric on the ground to sit down and relax. However, a supervisor then confiscated them and told the workers to lie down on the hard floor instead.

More than 2,000 workers subsequently stopped working and gathered in protest. They were soon followed by nearly 4,000 workers, who went on strike to demand changes to the company's policies.

The strike carried over to Thursday, with workers giving the company a list of 14 demands, such as an increase to their basic salary, child benefits, seniority bonuses and allowances to cover travel expenses. They are also asking for adequate maternity leave, reasonable working hours, and scrapping penalties for absence from work due to sickness or other emergencies.

The workers are also angered by the company's unreasonable regulations. Currently, they must inform the company three days in advance if they want to take sick or bereavement leave. They are also allowed only one day of paid leave per month.

Thanh Hoa General Confederation of Labor and Thach Thanh District authorities on Thursday morning organized a dialogue between the workers and the company's management board to derive a solution for the crisis.

By Thursday afternoon, the company fired the supervisor responsible for the incident on Wednesday afternoon and agreed to consider some of the workers' demands, according to Tuoi Tre (Youth) newspaper.

Vietnam has delayed passing a law on demonstrations multiple times, so all protests held by workers amount to what is known as wildcat strikes. A total of 133 wildcat strikes took place across the country in the first five months of this year, with disgruntled workers demanding better pay and working conditions and protesting against overtime, according to the Vietnam General Confederation of Labor.

The number of strikes was down by 24 percent from the same period last year, but more workers were involved in the protests, it said.