For the first time in anyone’s memory (and for that matter for the first time since Eugene Debs in 1920) a self-identified Socialist rallied large numbers behind an explicitly anti-corporate, anti-Wall Street, pro-working class platform. 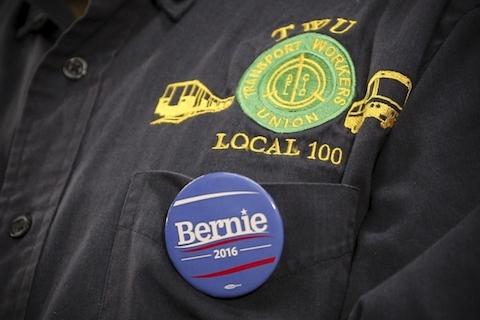 Unions that supported Sanders are uniting in the new Labor for Our Revolution network,

Senator Bernie Sanders' candidacy for president in 2015-16 opened up new political contradictions in the U.S. labor movement. Unlike other Western democracies where organized labor has had a role in founding social democratic parties of many different stripes, U.S. labor has faced an often painful and difficult choice of supporting the lesser evil of two corporate candidates, usually the nominee of the Democratic Party. But in May of 2015 when avowed Socialist Bernie Sanders threw his hat in the Democratic Party primary ring, a prairie fire was ignited within the labor movement. Sanders, while actually an independent, realized that at this point in history his most relevant strategic move was to battle for the Democratic nomination.

For the first time in anyone’s memory (and for that matter for the first time since Eugene Debs in 1920) a self-identified Socialist rallied large numbers behind an explicitly anti-corporate, anti-Wall Street, pro-working class platform.  The reaction within labor was swift and very impressive. While the usual suspects lined up to support the pre-ordained candidacy of Hillary Clinton as expedient and inevitable, seven national unions and over 100 locals and more than 50,000 individual union members endorsed Bernie. In a tell-tale sign of the political future of neo-liberalism, 35 locals of the International Brotherhood of Electrical Workers (IBEW) endorsed Senator Sanders and joined the new political formation, Labor for Bernie. Today, many think that Bernie would have beaten Trump, especially because of his traction with disaffected working class voters in the key swing states that flipped the Electoral College to Donald Trump.

Far too many workers believed – and still believe -- that a Trump presidency would benefit those left behind by decades of corporate greed and empty promises from Democrats. The challenge we now face as progressive trade unionists is to meld the broad support for Sanders with a larger base in the labor movement.  Doing so would address two crucial tasks at the same time:

Especially in the wake of Charlottesville and the resurgent neo-Nazi, white supremacist movement, it's urgent that the Sanders' base in the labor movement take on another challenge: We must win over as many unions and their members to stand up against racist, white supremacist and anti-immigrant attacks. For example, four of the "Bernie unions" (CWA, NNU, UE and ATU) signed on to a statement supporting the May 1 rallies against Trump and for immigrant rights.

The seven national unions that endorsed Senator Bernie Sanders for president have come together to form Labor for Our Revolution and to back Our Revolution – a national network created to continue the movement that grew out of the Sanders' presidential challenge in the Democratic primaries. (The seven unions are: the Amalgamated Transit Union, the American Postal Workers Union, Brotherhood of Maintenance of Way, the Communications Workers of America, International Longshore and Warehouse Union, National Nurses United, and United Electrical Workers.

What are the prospects for these unions and Our Revolution to carry forward Labor for Bernie's effervescence into a new political force capable of meeting the steep challenges laid out above?

Currently there are more than 300 local Our Revolution formations in the U.S. and four State Committees in Texas Massachusetts, Wisconsin, and Maryland.

The Labor for Our Revolution affiliated unions are actively assisting Our Revolution's campaigns while continuing to tap into the Sanders' campaign base to gain support for their collective bargaining, contract, and organizing campaigns. Our Revolution’s success depends on a solid foundation in the working class and strong support from the labor movement.

Communications Workers of America past president Larry Cohen who helped lead labor support for the Sanders campaign is now the Our Revolution Board Chair and a key leader of Labor for Our Revolution. Cohen is urging union leaders and members to plug into local groups or form new ones of their own.

At a national Labor for Our Revolution meeting in Chicago on June 9, United Electrical Workers (UE) General President Peter Knowlton made a presentation about the network's mission and UE union members' growing support for it.

"We follow in the footsteps of Rev. Martin Luther King Jr. who said, 'The labor movement is the principal force necessary to transform workers' oppression and despair into hope and progress,'"said Knowlton. "Unions, along with workers' centers and other workers' organizations must prioritize policies that strengthen and fortify the organization of workers in order to protect us against the ravages of capitalism. We can deepen and reinforce this perspective in Our Revolution."

"Unions getting involved in Labor for Our Revolution give us the ability to influence Our Revolution so that it has significant focus on the working class…It also gives us the opportunity to organize our own members around broad, working class issues.

"Labor for Our Revolution is an opportunity to help build a movement that crosses all the political persuasions of our members. The issues of the Sanders campaign were put before the people as a referendum—and the people spoke. So let’s go out and build motion and power around these demands."

In the summer of 2017, Labor for Our Revolution began supporting the struggle within the Democratic Party by demanding that all Democratic Members of Congress co-sponsor eight bills (#PeoplesPlatform) that taken together are a broad populist program. The "Summer for Progress" campaign defines a clear anti-corporate platform that should be attractive to all working people who are tired of Wall Street calling all the shots.

The enthusiasm for Labor for Bernie and the Sanders campaign showed the potential for a new progressive wing in the labor movement. Labor for Our Revolution's mission to unite union members and other workers around Our Revolution's populist political platform is a promising next step.  For it to succeed, many more unions on the national and local level will have to join and work together towards a new vision of labor's role in politics.

The task at hand is to reconfigure the unions that supported Bernie into Labor for Our Revolution, and to recruit new labor organizations that may have supported Clinton, but now realize that an explicit anti-corporate platform is the best way to hold their members' political allegiance and point the way forward during the resistance to Trump and beyond.