labor Bernie vs. Biden: When Will Unions Show Solidarity With Sanders? 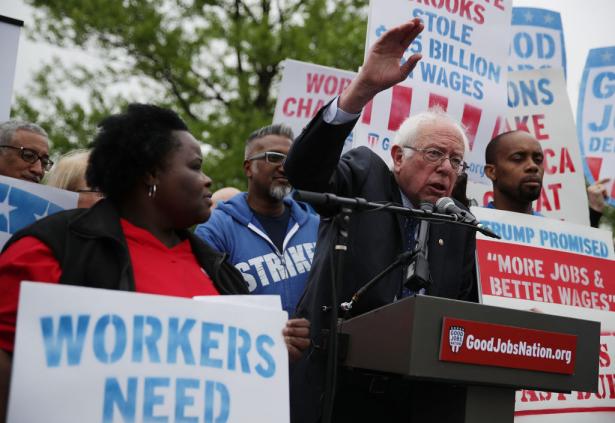 Bernie Sanders speaks during a rally in front of the Capitol April 26, 2017 in Washington, D.C.,Alex Wong / Getty

In May 1976, a small group of Vermonters gathered in a church basement in Montpelier, the state's capital, to learn about union organizing. At a day-long training session, the United Electrical Workers (UE) and three other progressive unions discussed strategy and tactics with cheese makers from Vermont's famous Cabot Creamery, delivery drivers from a local beer distributor, and white-collar workers from a nearby newspaper.

As coordinator of the event, I arranged for the opening speech to be delivered by a fellow democratic socialist. Both of us had testified a few months earlier in the Vermont legislature, located just down the street, against a Republican-backed "right-to-work" bill.

My new political friend had a rumpled appearance, gruff manner, and distinct "flatlander" accent. He took the mike and launched into a now-familiar tutorial on the difficulty of making ends meet on the minimum wage. As a freelance writer and underemployed carpenter in mid-1970s Vermont, he spoke from personal experience.

He reminded his working-class audience what many in it had heard before: "If you earn $2.50 an hour, it's because you are not smart enough or haven't worked hard enough." He debunked the myth that "independent Vermonters" were better off without a union negotiating for them.

As later reported in (the still non-union) Barre-Montpelier Times-Argus, he declared that it was "our job to wake people up and get them moving," despite the high risk of management retaliation for organizing a union.

Nearly forty-four years later, after serving four terms as mayor of Vermont's largest city and then three decades in Congress, Bernie Sanders is running for a job that he — unlike any other candidate — calls "organizer in chief."

If elected president, he pledges to use his bully pulpit to mobilize millions of workers behind a sweeping legislative agenda. Few of his goals are more ambitious — and more critical to union survival — than strengthening labor's right to organize and bargain without employer interference.

Sanders's unique personal history strongly suggests that labor law reform could become more achievable after January, 2021, if he defeats Donald Trump.. And wouldn't that be a new experience — a candidate for president winning and then actually fighting to strengthen workers' rights?

In the last five decades, unions have tried to get labor law reform three times:  during the Carter, Clinton, and Obama administrations. Each effort was met with strong opposition from Corporate America, congressional Republicans, and business-backed Democrats. Luke-warm support from the White House ensured that much needed changes in the National Labor Relations Act never got enacted (and, under Bill Clinton, were only studied by a presidential commission).

During my twenty-seven years as an organizer for the Communications Workers of America in New England, I was part of labor delegations that met with four Democratic presidential candidates who never made it to the White House:  Ted Kennedy, John Kerry, Michael Dukakis, and Hillary Clinton. All thought of themselves as great friends of labor.

But getting any of them to side with labor, rather than management, during a high-profile union dispute took immense pressure.  On key policy issues — like free trade, deregulation, and single payer healthcare — they were not reliable allies of workers at all.  Their political descendants in today's Democratic primary field — even Kennedy's successor in the Senate, Elizabeth Warren —will be no more eager to confront big business over workers' rights, as a top priority of their administration.

However, there is one New Englander that members of my union and others could always count on. After he was elected mayor of Burlington in 1981, Bernie Sanders immediately overhauled the city's collective bargaining process.  Over the next eight years, his administration developed positive relationships with the American Federation of State, County and Municipal Employees (AFSCME) and the International Brotherhood of Electrical Workers (IBEW).

While still mayor, Sanders convened annual meetings of local labor activists to help them develop more successful organizing and bargaining strategies in the private and public sector. To stimulate new rank-and-file thinking, Sanders and his staff invited out-of-state labor speakers who were part of national efforts to revitalize the union movement.

As Vermont's lone congressman, Sanders repeatedly helped workers get better organized, in their workplaces and communities. In 1994, he sent a letter to phone company customer service reps in Vermont who were part of a New England–wide unit of 1,500 considering whether to join CWA. He urged them to vote "yes"; a majority did. Thousands of Vermont nurses, home care workers, and state college system faculty members have begun organizing in recent years, and Sanders has been on their side as well — appearing at meetings, picket lines, and rallies.

He also became a staunch ally of the Jobs with Justice affiliated Vermont Workers Center and the more recently formed Rights & Democracy organization, now part of People's Action and Our Revolution. Both of these Sanders-backed community-labor coalitions have campaigned for single-payer health care, immigrants' rights, paid sick leave, and other working-class causes in the Green Mountain State.

In 2006, when Sanders was making his first bid for the Senate, 2,500 members of CWA and the International Brotherhood of Electrical Workers (IBEW) faced the loss of hard-won contract rights and benefits after Verizon threatened to sell its landline operations in northern New England to a small under-capitalized, firm called FairPoint.

Bernie convened a public forum in Burlington, where workers, consumers, and utility industry experts spoke out against the pending sale, citing the buyer's precarious financial situation. (FairPoint would enter Chapter 11 two years later.) Before governors in three states and their appointed public utility boards hastily rubber-stamped the ill-fated deal, Sanders, now a newly elected US senator, brokered an IBEW-CWA meeting with two top executives of FairPoint. With Bernie in the room, we confronted FairPoint about its antiunion record. Eager to placate Sanders — and overcome  opposition to the Verizon sale — FairPoint decided to remain neutral when CWA and IBEW organized 150 of its non-union workers in New England.

Nevertheless, in 2014, the company launched an all-out assault on the wages and benefits of FairPoint's entire workforce, triggering a bitter 131-day anti-concession strike. Sanders appeared on picket lines, held a press conference in support of the strikers, and argued their case in a letter to the company's CEO.  Two year later, when 36,000 members of CWA and IBEW walked out at Verizon to resist givebacks, Sanders spoke at strike rallies in New York City and Philadelphia. He publicly criticized the $20 million-a-year compensation package of Verizon CEO Lowell McAdam, who denounced Sanders as a "contemptible" meddler in the dispute.

During walkouts last year by thousands of CWA members at the University of California and AT&T, Sanders rallied strikers in Los Angeles and Louisville, Kentucky. Throughout his presidential campaign, he has done the same for other unions. And when he hasn't been able make personal appearances on behalf of their embattled members, he has urged his army of supporters to show up instead — at union picket lines, rallies, and protests. This is an unprecedented form of candidate solidarity with labor causes.

Thanks to Sanders' presence in the primary, all of his major competitors, save for Michael Bloomberg, have paid lip service to private sector labor law reform.  Joe Biden continues to champions the PRO Act, a labor law reform package passed last month in the House.

At the same time, top executives of anti-union firms like Comcast are hosting fundraising parties for Biden. Corporate lawyers hired to fight unionization — at firms like Jackson Lewis and Ballard Spahr — are bundling maximum donations to his campaign . And that's because the PRO Act won't go any further under Biden than the Employee Free Choice Act (EFCA) did under the Obama-Biden administration, which claimed to be in favor of "card check" recognition of unions but prioritized other legislative goals instead.

Unlike EFCA, the PRO Act doesn't require all employers to recognize unions if a majority of their workers sign cards affirming their support. The bill's sponsors act as if just tinkering with the NLRB election process — while adding language repealing right-to-work laws in twenty-seven states, legalizing secondary boycotts and picketing, and banning permanent replacement of strikers — will make labor law reform more popular on Capitol Hill. This is magical thinking. As soon as there's any real chance of the PRO Act being enacted in both the House and Senate, under a new administration, there will be a concerted employer campaign against it, on a greater scale far greater than past management opposition to EFCA.

As In These Times reported last month, "card check" is still an avowed goal of Sanders and  Warren" in "their own plans for empowering workers and labor unions." But there's a big difference between having labor-related "plans" and actually intervening in labor disputes to help workers build power — or fend off management attacks.

In his response to CWA's 2020 presidential candidate questionnaire, Sanders spelled out his long and unusually close working relationship with CWA members  of all kinds. "The list is not fully comprehensive," he noted. "But it's a snapshot of our great history together—and a glimpse of how promising and bold our future together will be, with your support."

The CWA national union endorsed Sanders in 2016, after a binding membership poll. UPTE-CWA, which represents 15,000 employees of the University of California, has already gone ahead with its own Sanders endorsement, after collecting and sharing information about all current candidates and letting the rank-and-file decide. Sanders won with 66 percent. (Warren came in second with 22 percent.)

But CWA headquarters in Washington still hasn't conducted a national presidential endorsement poll for 2020 and, some officials are actively discouraging other locals from backing Sanders on their own, like UPTE-CWA did.

In Boston, the political action committee of IBEW Local 2222 urged its several thousand Verizon members to vote for Bernie in the Massachusetts primary — even though IBEW national officials have endorsed Biden. That top-down decision led 1,300 working electricians to sign a protest petition demanding that the union back Sanders instead because of his "transformative vision for expanding the labor movement, as well as the democracy and solidarity that his campaign embodies."

A similar internal union rift occurred in Nevada, when UNITE-HERE leaders depicted Sanders' support for Medicare for All  as a threat to negotiated benefit coverage— but many of the union's rank-and-file members favored Sanders anyway.

Meanwhile, Bernie's primary adversaries — whether corporate backed or just less committed to labor — are pummeling him from all directions, with heavy Super-PAC spending on negative ads and debate stage gang ups. When local unions anywhere have been under equivalent fire, Bernie has always rushed to their side—without even waiting for a formal request for help.

If past beneficiaries of Sanders' labor support don't return that favor soon, they may discover there's a price to be paid, down the road, for acting like solidarity is a one-way street.

[Steve Early was an organizer and international union representative for the Communications Workers of America in New England from 1980 to 2007. He was a founding member of Labor for Bernie in 2015 and has authored four books on labor and politics, including Refinery Town: Big Oil, Big Money, and the Remaking of An American City. He can be reached at Lsupport@aol.com.]