New Way of Teaching Columbus: Putting Him On Trial for Murder

A longtime educator has created an increasingly popular lesson that turns the classroom into a courtroom and asks students to put Columbus, his crew, the King and Queen of Spain and the indigenous people on trial for murder. 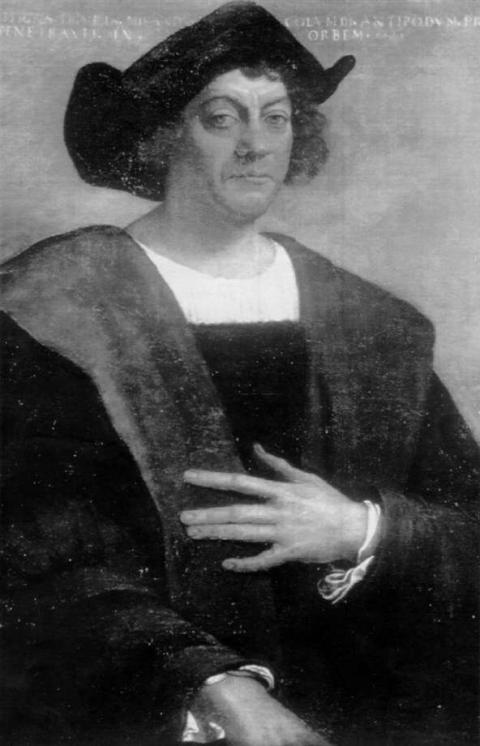 This painting of Christopher Columbus by Sabastiano Del Piombo is at New York's Metropolitan Museum of Art., Associated Press

For decades, every American kid in a schoolyard has known Christopher Columbus as the Italian explorer who "in 1492, sailed the ocean blue." But that little ditty is being phased out faster than you can name the explorer's three ships.

The rhyme is part of Columbus' romantic image, which includes searching for riches and spices, discovering America and befriending the "Indians." But historians have been pointing out for some time there is much more to this story, a rather grisly and gruesome tale of conquest. Now many teachers are presenting more perspectives on European colonization, and they don't paint Columbus as statue-worthy.

A longtime educator has created an increasingly popular lesson that turns the classroom into a courtroom and asks students to put Columbus, his crew, the King and Queen of Spain and the indigenous people on trial for murder.

"It begins on the premise that there's this monstrous crime in the years after 1492 when perhaps as many as 3 million or more Taínos on the island of Hispaniola lost their lives," says Bill Bigelow, the curriculum editor of Rethinking Schools and the co-director of the Zinn Education Project. "It asks students to wrestle with the responsibility in this."

The students play the role of the defendants and are asked to defend themselves against the charges, and to explain who they think is guilty and why.

Bigelow taught high school in Portland, Ore., for 30 years and he now creates lesson plans and teaching materials with a more critical view of historical narratives. He says more than 73,000 teachers across the country, including many in San Francisco and the Bay Area, have registered with Zinn Education Project and downloaded hundreds of thousands of the free lesson plans. "The People vs. Columbus, et al." is the most popular.

Bigelow says Columbus has long been inaccurately presented in the classroom as a godlike figure.

"In the traditional stories, Columbus is presented kneeling, planting a flag and claiming the lands he supposedly discovered in the name of the King and Queen of Spain. Children are never taught to ask, 'What right did he have to that land?'" says Bigelow. "The myth begins there with dividing the world in two, with the people who are the rulers and the people who are there to be ruled. The traditional story legitimizes the cleaving of the world into the worthy and the unworthy."

In actuality, Bigelow says, Columbus wasn't the first to discover America. His ships landed in the Bahamas and he went on to become the first to transport slaves across the Atlantic, sending the indigenous Caribbean people know as the Taíanos to Spain.

"In February 1495, he ordered his men to round up 1,600 of the Taínos and to choose the 500 best and to ship them as slaves to Spain, and then he told his men to help themselves to the rest," Bigelow says. "He forced the Taínos to search for gold and they had a quota that they had to meet, or else they'd have their hands chopped off."

He adds: "The defense is that he was a man of his time."

When Bigelow teaches his lesson in Columbus, he always starts by asking students what they know about this time period, and not a single student has ever mentioned the Taínos.

"We all know this name of this one white guy who came from Europe but none of us know the names of the people who came here first," he says. "What does that say about our education?" SFGATE heard from teachers at several schools around the Bay Area — including Lowell High School and the Synergy Alternative High School in San Francisco, the Bayshore School in Daly City, and the Academy of Alameda — who said their students have put the explorer on trial in their classrooms.

Dominic Altieri, who teaches sixth through eighth grades at Synergy, says he spends two weeks on the project and his students are all assigned roles — from Columbus himself to Columbus' sailors to Taínos. They study the history of their characters, make costumes and prepare their defenses for the trial.

"We don't try to cast moral judgement," Altieri says. "We're trying to look critically at those events and that allows us to look at Columbus' discovery in a more accurate light. Who was really responsible for the deaths of millions of indigenous people? I try to not get too judge-y with it, and when he is on trial, they draw their own conclusions."

Maya Baker, an eighth grade teacher at the Bayshore School, introduced the lesson in her classroom for the first time this year.

"What was powerful was the kids had to be thoughtful about being on the other side," Baker says. "They are like, 'I know that King Ferdinand and Isabel are guilty. They should be guilty.' But they had to think about it, think about why they did what they did."

Baker says the lesson involves putting the "System of Empire" — the government at the time and its conquest for riches — on trial. That was the most challenging and enlightening part for her students.

"The system is the most complicated one," Baker says. "It gives them this whole other perspective and awareness. How can you blame the system? They have to think about the structures that were in place and what that means. The jury got really thrown off.

"Kids are recognizing that there are these structures in place and people just make assumptions about it. They started thinking about it in other ways and how it plays into modern society. Why we have certain holidays off. They become aware of the assumptions people make based on the structures in our system and learn it's important to challenge them."

Lauretta Komlos teaches ninth grade modern world history at Lowell High School and has had her students participate in a mock trial — complete with witnesses — for the past three years.

"I think that what we get out of it is that there's understanding of how history can be written one way and there can be this dominant narrative for hundreds of years, so much that we can have this national holiday celebrating Columbus," says Komlos, who practiced law before becoming a teacher. "And now that we're becoming more open about understanding history and we're realizing this was not a very nice man. It's not even close to a person you'd want to celebrate."

McTygue is one of the lead writers of a new framework for the curriculum at California's K-12 public schools presented in 2016, and she says fifth grade teachers, who teach the explorers and founding of the country, are now encouraged to present multiple perspectives in their lessons.

"I think one of the reasons Columbus has become a symbol is that it's easy for school children to glom onto one person," McTygue says. "I think Columbus in and of itself isn't as important as what happened when these two civilizations came together. That I think is the larger and more significant story."

In the new framework, teachers are advised to help students trace and learn the routes of the explorers and study the trade routes. They're also asked to have students discuss the explorers' economic and religious motives and answer questions such as "What happened when Europeans encountered indigenous people?"

It's suggested that students read the letters European explorers like Christopher Columbus wrote to the sponsors of their voyages to help students understand that all historical actors have agendas and perspectives.

Original source material — whether logs, journals or letters — are recommended as a teaching tool through the new framework to present a more accurate picture of history. Anthea Hartig is the executive director of the S.F.-based California Historical Society that's working with the California History-Social Science Project at UC Davis to identify, collect and make materials available.

She's thrilled to see the rethinking of the history of Columbus in public schools.

"History has been traditionally taught in the hero style. A great man, rarely a woman, at the center of an event, "Hartig says. "Maybe you could stick Joan of Arc in there. These men were exalted and meant to inspire. If you read a lot of juvenile literature you'll notice this. But really, the revolutions Columbus launched weren't the revolutions for which he's celebrated. What he imposed on the islands was some of the most heinous genocide and labor forced on the world. By 1555 there were no more natives. Then they started to import slaves from Africa."