The film is a haunting and timeless American tragedy that feels ever prescient given the current administration’s foggy understanding of morality. It might prove to be a tough sell thanks to an awkward title and a strange plot trajectory, but Roman J. Israel, Esq. is a richly rewarding drama blessed with one of the best, most lived-in performances of the year. 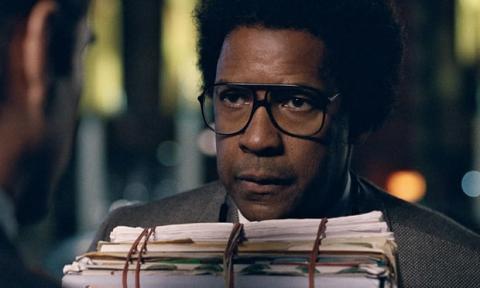 The movie star charisma of Denzel Washington has led him, deservedly, to the top of the A-list but has also steered him away from showcasing his considerable and transformative talents as an actor. As his fame has increased, there have been crumbs left along the way but too often he’s been stuck in substandard action territory, an understandable business decision but a regrettable one nonetheless.

Last year, his adaptation of Fences allowed him to show just how equipped he still is, and would have made a far more deserving best actor winner than a sleepwalking Casey Affleck in Manchester by the Sea. He’s probably hoping for better luck this season with yet another meaty role in unusually quick succession. But his latest, the poorly titled Roman J. Israel, Esq., might prove a little too unusual for the Academy and for audiences too.

Israel is a socially awkward, idealistic lawyer who is relegated to an office-based position within the law firm he co-partners, his eccentricities and rigid adherence to the law better suited to a role behind the scenes. But when tragedy strikes his partner, Israel is left without a job and forced into a world that’s unfamiliar and unwelcoming. He finds himself tapped for a job by the slick head of a larger firm (Colin Farrell) and, through an unlikely set of circumstances, Israel’s life rapidly begins to change.

Like writer/director Dan Gilroy’s previous film Nightcrawler, Roman J. Israel, Esq. works best as the character study of a man who never usually gets to take centre stage. Initially, Israel seems like the sort of semi-autistic legal genius that we’ve come to expect on the small screen, a brilliant renegade wowing courtrooms with his unlikely charm on some repetitive CBS procedural. But there’s far more here to chew on and Gilroy isn’t interested in cliche or providing us with a series of satisfying gotcha moments.Israel is a by-the-book, true believer in the importance of following the letter of the law. When he’s finally allowed inside a courtroom, he’s dismayed that in practice those around him aren’t quite as steadfast, and there’s a lingering poignancy as he gradually loses touch with his core values in a bid to survive in the real world. He’s a relic of sorts, a civil rights activist from another era who believes that the system is in need of widespread reform and in another package, those he meets might be impressed with this. But he’s an odd proposition, uncomfortably dressed and almost always wearing headphones, a savant lacking in social skills.

It’s not a role we’re used to seeing Washington play, his hugely underrated performance as a haunted soldier in The Manchurian Candidate probably coming the closest, but he’s never been better. There’s nothing overly mannered or visibly rehearsed about his work here, he just disappears into the character, a difficult task for a star as familiar as Washington. He’s so captivating to watch that at times I wished he was headlining a 10-part Netflix series, his daily trials proving endlessly fascinating.

Given the career renaissance he’s recently enjoyed, it’s a somewhat regressive role for Farrell, playing the sort of hotshot he was stuck with in his early Hollywood career and there’s a subplot with Carmen Ejogo as an activist that doesn’t always ring true, but even in the film’s less successful moments, I admired the loose shagginess of it all. It’s structured in a way that will frustrate many viewers expecting an involving Nightcrawler-esque thriller, but it’s the sort of patiently plotted mid-budget drama that rarely gets made nowadays. Gilroy’s script is alive with detail and deft characterization, and it’s become a cliche to compare a film like this to the cinema of the 70s, but Gilroy almost forces the comparison with a score and soundtrack that, like Israel, live in the past.

It’s a haunting and timeless American tragedy that feels ever prescient given the current administration’s foggy understanding of morality. It might prove to be a tough sell thanks to an awkward title and a strange plot trajectory, but Roman J. Israel, Esq. is a richly rewarding drama blessed with one of the best, most lived-in performances of the year.

Roman J. Israel, Esq. screened at the Toronto film festival and will be released in US cinemas on 3 November.