“This sort of national effort to enhance the ability of individuals facing sex discrimination and sexual harassment to find legal help is not something that has existed before.” 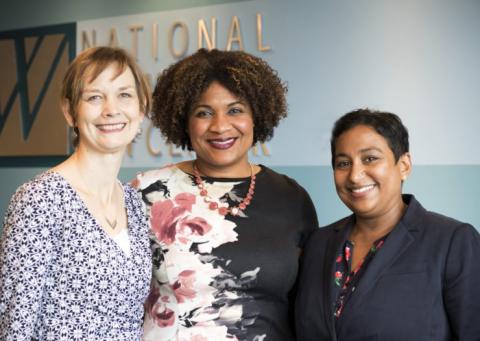 Shortly after the election, the attorneys and advocates who work at the National Women’s Law Center (NWLC) started having a conversation. It seemed that the incoming Trump administration was likely to move backward on enforcing civil rights, loosening regulations, and dropping enforcement. They started “to think about the many concrete ways people are harmed when our civil rights enforcement agencies shift priorities, cut back, change positions,” said Fatima Goss Graves, the organization’s president and CEO.

Yet at the same time, they were getting an uptick in calls from women reporting harassment and discrimination. Their phones were also ringing off the hook from private practice attorneys who wanted to help make a difference after the election.

What could be done to address all of these at once? The nonprofit just publicly announced its answer: The creation of the first national legal network focused on combating sex discrimination in the workplace, schools, and health care. The newly created Legal Network for Gender Equity already consists of 75 attorneys from across the country who plan to take on sex discrimination cases.

It was “something we can do that is really concrete at a moment that we really worried that our civil rights protections and the enforcement of our landmark laws were at grave risk,” Goss Graves said. “Now is the time to be aggressive.”

The administration has since proved that their fears were well founded. The past few weeks have been a testament to the direction it wants to take civil rights: blocking an Obama-era equal pay rule, rescinding the Title IX guidance on sexual assault on campus, changing the Department of Justice’s position on gender discrimination, and rolling back the Affordable Care Act’s requirement that employers include contraception in health-care plans without a copay.

“This is a moment when the federal government is in many ways abandoning the field in the fight for women’s legal rights,” said Emily Martin, the NWLC’s vice president for workplace justice.

So the new legal network will attempt to help fill the gaping hole left when the government decides to turn away from enforcing women’s rights, an attempt to “try to step into the breach that’s being created,” Martin said. The network will act as a hub, fielding calls from people who say they have experienced sex discrimination, and then putting them in touch with nearby attorneys who might be able to take on the cases.

It already has its first case. The network fielded a call from Kassandra Lawrence, a police officer in Stafford, Virginia, who alleges that she was denied a work accommodation while she was pregnant, was pushed into unpaid leave, and was blocked from having her coworkers donate their paid sick leave to her during a pregnancy-related surgery. Yet other employees were routinely given accommodations and donated sick pay, she claims. The network has since put her in touch with the Spiggle Law Firm, which has filed a lawsuit alleging pregnancy discrimination on her behalf.

The network will put to work the many attorneys who are now eager to do something in the post-election atmosphere. “It has the potential to tap this newly awakened energy, particularly in the legal community,” Martin said.

And it also serves as a signal. “We felt like it was really important to also be able to tell institutions, whether you’re talking about employers or schools … that these landmark laws still exist,” Goss Graves said. The federal government may be brushing them aside, but it doesn’t make them any less real. “It matters the message that the federal government sends. And so we think it’s important to send some additional messages,” she said.

But the effort is also meant to outlast any one administration. “Even though it is being in many ways burst out of terrible times, it is going to be an important part of the work that we need to build for the long haul,” Goss Graves said.

Beyond fielding calls from potential plaintiffs, the network will help share knowledge and resources “to strengthen the capacity of the private bar to do this sort of litigation,” Martin said. It can make sure that attorneys are kept up to date on the latest legal arguments and developments in the field, as well as teach more of them how to bring these sorts of cases. That way “the private bar is better able to respond to all of these assaults,” she said.

The NWLC sees this as “an important moment to grow the broader infrastructure of people who are ready to take these types of cases,” said Goss Graves. It will add capacity that can be deployed even during times when civil rights aren’t under threat at the federal level.

The NWLC also plans to track all of its work, and that data could be useful elsewhere. “We think we’ll be able to do our broader advocacy more effectively,” Martin said, since the numbers will give them “insight into what is happening on the ground.” That data can serve to bolster arguments made in front of the courts, Congress, or even state legislatures.

There are some examples of these kinds of networks in other areas, such as Lambda Legal’s national network to protect gay rights and the Transgender Law Center’s network to protect transgender people’s rights. But, Martin noted, “This sort of national effort to enhance the ability of individuals facing sex discrimination and sexual harassment to find legal help is not something that has existed before.”

The creators of the network hope that it will easily complement the existing work being done to fight for women’s legal rights. The American Civil Liberties Union has a women’s rights project, for example, but it generally serves as co-counsel on the cases it takes on. This new network, on the other hand, will help in situations where neither organization has the capacity to take on a case, instead finding private lawyers to help a plaintiff. It will “give people the tools to move forward if we can’t bring the case ourselves,” Martin said. Someone who calls the network will, at the very least, be put in touch with an attorney, who can give her a pro bono consultation about whether her rights were violated and how a case might move forward.

“There is no way that each of us alone could handle what is out there,” Goss Graves added. The NWLC itself is now even busier playing defense against many of the Trump administration’s actions, such as the equal pay rule change and the contraception benefit reversal. So it can use all the help it can get in taking on proactive cases.

The network is still being built up, and it won’t be fully operational until the new year. The plan is to eventually have an expanded network consisting of attorneys in every state. Once it’s in full swing, its creators hope it will create lasting change.

“Out of really tough times, sometimes there’s great opportunity to build in the direction that it would have been great to build all along,” Goss Graves said.

Bryce Covert is an independent journalist writing about the economy. She is a contributing op-ed writer at the New York Times and also writes for the New Republic, the Nation, and other outlets. Her writing has appeared in the Washington Post, the New York Daily News, New York Magazine, Slate, and others, and she won a 2016 Exceptional Merit in Media Award from the National Women’s Political Caucus. She has appeared on ABC, CBS, MSNBC, NPR, and other outlets.