By now the botched, indifferent response of the Trump administration to Hurricane Maria’s devastation in Puerto Rico has been well-documented. Puerto Ricans, however, are not the only US citizens whose lack of democratic rights has affected its quality of life, and for the worse. The same can be said for the residents of Washington, DC, the nation’s capital. 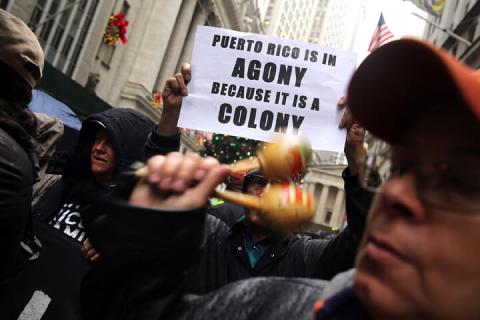 By now the botched, indifferent response of the Trump administration to Hurricane Maria’s devastation in Puerto Rico has been well-documented.  President Trump’s insulting tweets about Puerto Rican officials, especially San Juan Mayor Carmen Yulin Cruz, and his implication that the islanders were to blame for their own plight, set the stage for his tone-deaf tour of the storm-blasted island.  He spent much of his visit crowing about how wonderful the US relief effort was, despite ample evidence to the contrary, and his signature photo-op was his tossing rolls of paper towels into a crowd, as if he was hoping the people would fight over them.  Before and after his trip his obsession with football players kneeling during the national anthem dominated his statements and tweets, and hurricane recovery was relegated to an afterthought.

The devastation Maria brought to Puerto Rico was almost unimaginable.  Thousands of homes were damaged or destroyed.  By October 20 – one month after Maria struck the island – the death toll had reached 49, and 30 percent of its inhabitants still lacked water.  Many still are without power or reliable phone service.  Isolated facts and statistics, however, fail to capture fully the destruction of Puerto Rico’s vital infrastructure and how Maria reduced many of its residents – temporarily, at least – to a virtually pre-modern mode of existence.  The sluggish US government response is only slowly easing the agony.

News reports have compared the administration’s response to Maria with its considerably more robust assistance for Texas and Florida in their recovery from Hurricanes Harvey and Irma, respectively, the two other major storms to hit US territory this season.  In terms of personnel on the ground, the speed of financial aid, and the rhetorical support (or lack thereof) from the White House, it was clear that Puerto Rico was the poor stepchild of hurricane victims, even though it suffered far more long-term damage than did either Texas or Florida.  Trump, for instance, on October 12 complained in a tweet that “we cannot keep FEMA, the Military & the First Responders, who have been amazing (under the most difficult circumstances), in P.R. forever!” – although he stated no such limitations for Texas or Florida.

Why the difference in Puerto Rico?  Trump cited logistical obstacles, such as the difficulty of getting aid to an island.  But it’s no coincidence that America’s largest colony is predominately Latino and Spanish-speaking — a demographic that Trump has been scapegoating since he began his run for president.

More fundamentally, it doesn’t take a cynic to conclude that a major cause of the lackluster response was Puerto Rico’s powerless position as a US colony.  If the relief effort in Texas or Florida had been so half-hearted, two senators and large House delegations from each state would have bombarded the administration with complaints and made the lives of officials in the Department of Homeland Security and the Federal Emergency Management Administration miserable.  During the 2018 midterm elections, the responsiveness or lack thereof from federal officials would preoccupy the minds of voters, likely making a difference in swing districts in affected areas.  And a poor federal response would have been a campaign issue during the presidential election of 2020, and – especially in purple Florida – could have proved decisive in which way the electoral votes went.

Puerto Rico, as a mere colony, had none of these levers to employ.  In Congress, it has only a non-voting representative in the House, no voice at all in the Senate, and its citizens cannot vote in US presidential elections.

Lack of democratic rights is more than a symbolic issue.  Before Maria, the island was in the throes of an economic crisis that the mainstream media depicted largely as the fault of its own out-of-control spending.  But, as Mother Jones reported two years ago, Puerto Rico’s colonial status contributed in no small part to its $72 billion debt:  Puerto Ricans “pay Medicare taxes but Medicaid funding is capped for them. They are not covered by many provisions of the Affordable Care Act and are not eligible to claim the earned-income tax credit,” the magazine reported.

An estimated 10,000 Puerto Ricans have decamped for the mainland since Maria, many of them permanently, in addition to some 400,000 who have left over the past decade due to the island’s economic problems – which amounts to nearly 10 percent of the total population.  More will surely follow – the ability to move stateside being one of the few tools Puerto Ricans have to improve their prospects, since they at least possess US citizenship.

Puerto Ricans, however, are not the only US citizens whose lack of democratic rights has affected its quality of life, and for the worse.  The same can be said for the residents of Washington, DC, the nation’s capital.

If Puerto Rico is cursed by federal Washington’s indifference and neglect, the District of Columbia has the opposite problem:  suffocating micromanagement.  Unlike Puerto Rico, DC residents do have the ability to vote in presidential elections – a right gained only in 1961, along with a whopping three electoral votes.  But like Puerto Rico and the other US territories – the US Virgin Islands (which also was blasted by Maria), American Samoa, Guam and the Northern Marianas – the District has no voting representation in either house of Congress, only a non-voting representative in the House, and is subject to congressional budgetary and legislative oversight.  However, Congress generally lets the overseas territories – out of sight and usually out of mind – run their internal affairs.  The District, on the other hand, must endure the close attention of the federal gorilla with which it shares its 68-square-mile postage stamp of ground.

Congress’ ability to dictate to the citizens of DC stems from Article 1, Section 8 of the US Constitution, which states that “Congress shall have power . . . to exercise exclusive Legislation in all Cases whatsoever, over such District (not exceeding ten Miles square) as may . . .become the Seat of Government of the United States.”  This language led to the disenfranchisement of thousands of the country’s initial citizens, many of whom fought in the American Revolution; and now renders the nearly 700,000 citizens of the District as the only residents of the national capital of a democracy to lack voting representation in its legislature. 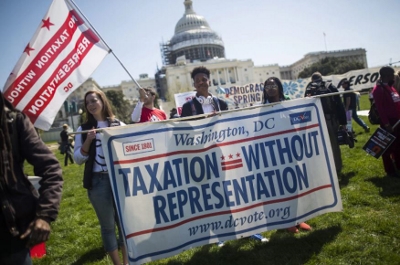 Supporters of D.C. statehood call for an end to “taxation without representation” as they protest outside the U.S. Capitol on April 15.
credit: Jim Lo Scalzo/EPA // The Washington Post

While Puerto Ricans have been divided about their future – continued “commonwealth” status, statehood or independence – the District, for at least the past four decades, has been largely united about its chosen path forward:  to become the 51st state.  DC residents have twice voted for statehood, the most recent last year when 79 percent supported statehood in a referendum.

While Puerto Rico’s colonial status has cost lives and livelihoods, driven hundreds of thousands away from the island, and jeopardized the health and well-being of Puerto Ricans for years to come, Congress’ bear hug of the District has caused, and is still causing, real pain for the District’s residents:

And this is only a partial list of the outrages members of Congress have foisted on the District – usually Republicans who slap around DC to show voters at home that they are defending conservative values from the out-of-control liberals in the local elected government.

In the face of the District’s building boom and the growth in population and tax base in recent years, it can be difficult to argue that the city is “suffering” under congressional oversight.  Yet is has been scarcely two decades since DC was under the thumb of a control board, appointed by Congress to supersede the local government’s authority during a severe fiscal crisis.  And DC cannot count on the good times to roll.  Alice Rivlin, who served as director of the Office and Management and Budget under President Bill Clinton, has done extensive analysis of the District’s finances for the Brookings Institution.  In testimony to Congress in 2009 — well into the current building boom and as the District’s population was increasing – she warned of the continual “structural deficit” in the District’s finances.  DC “must perform the functions of a state as well as those of a city government,” she testified, despite Congress’ prohibiting the District from taxing the income of the non-residents who work within its borders – and non-residents earn two-thirds of the income generated by jobs in the city.  In 1997 the federal government ceased its annual payment to the District to compensate it for the large percentage of land that it could not tax because it was occupied by federal buildings or nonprofit organizations.  Despite a long string of balanced budgets dating to the late 1990s, another recession could turn DC’s black ink to red – a fiscal bind created largely by DC’s colonial status.

Nevertheless, today the District looks every bit ready for statehood, with money in the bank, a robust tax base and a growing population.  Perhaps its greatest challenge is ensuring that all residents benefit from the overall prosperity, and unfortunately the gentrification that good times brings is forcing too many long-time working-class residents out of their homes – some to less-desirable dwellings, some to the suburbs, others into homelessness.  But this is a challenge apart from the negation of democratic rights:  The District should be creating more affordable housing today, and must continue to defend its citizens of lesser means once it achieves statehood.  With statehood, DC will have additional resources to meet its challenges, so long as the political will is sufficient.

Puerto Rico, on the other hand, has moved from economic basket case to disaster zone.  It seems less “ready” to throw off its colonial shackles than ever.  But should that be a reason for forcing the island to continue to languish in colonial limbo?

Some seven decades ago, Alaskan statehood advocate (and later Senator) Ernest Gruening answered charges that American’s northernmost territory was not yet “ready” for statehood:

As DC statehood advocates argued during the throes of the city’s financial crisis of the 1990s, democracy should be for everyone, not only the prosperous.  In the case of the District, justice demands that it be immediately granted the statehood it seeks.  In the case of Puerto Rico, history has shown that continuing “commonwealth” status is only a recipe for further neglect and decline.  Puerto Rican voters should be asked to choose between statehood or independence, and be granted whichever they choose – with generous federal aid to compensate the island for the many years of colonial mistreatment, regardless of which path they select.  The political stars are currently not aligned for either DC or Puerto Rico to achieve statehood, but with sufficient political agitation and consciousness-raising, they could be in the near future.

The ravages of colonialism are easy to read in Puerto Rico.  In the District of Columbia they are not so apparent but just as real.  It is time for the United States to live up to its democratic ideals and get out of the business of colonial imperialism, for good.

[Bill Mosley is a longtime member of MDCDSA and a statehood advocate.]