labor How Millennials Are Trying To Revive The Labor Movement 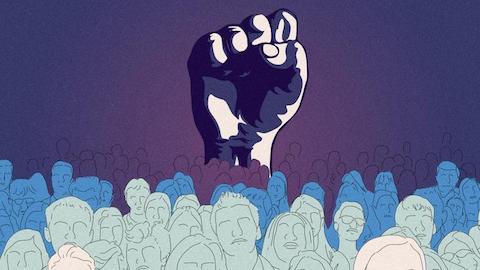 Mark Janus, an Illinois child-support worker, will soon argue before the U.S. Supreme Court that his free speech rights have been violated because he must pay “agency fees” to a union that, inter alia, negotiates contracts on his behalf. Last year California elementary school teacher Rebecca Friedrichs made the same First Amendment arguments at the high court against the teachers association to which she paid agency fees. The court deadlocked on Friedrichs’ s complaint following the death of conservative Justice Antonin Scalia, but his replacement, Justice Neil Gorsuch, is widely expected to cast a decisive vote in favor of Janus and against public-sector unions.

Generational labels are fraught with inconsistencies. Growing up is not, after all, a controlled experiment. But to the extent that millennial labels apply, Andrew Cohen’s story is emblematic. He watched as his parents fell victim to eroding protections for employees (his father, a luxury car salesman, lost his job and declared bankruptcy when Cohen was 8). He graduated from high school, only to find college extremely expensive and, because he had to pay his own way, ran up $20,000 in student-loan debt.

Later he would enter the Great Recession’s depressed job market, with few slots available to liberal arts graduates outside the low-paying service industry.

“A lot of my friends expected to own a house and have a family by the time they turned 30,” he says. “It was very shaky for people.” Among millennials who head households, a Pew Research Center study found in September, more live in poverty than do households led by previous generations.

By the time Cohen was 23 years old in 2009, the plans he had laid for his life collapsed. A self-described “dirty, punk-rock kid,” he had been thinking about environmental and economic justice, while participating in protests and direct actions. Armed with a bachelor’s degree in anthropology from the University of California, Santa Cruz, he expected to begin his post-college life with Teach for America, working with disadvantaged students in under-funded urban schools.

But after several rounds of interviews, Teach for America unexpectedly rejected his application. He suspects that a felony assault charge, incurred during a mass arrest at the 2008 Republican National Convention, had something do to with it, even though the charge was dropped. “The timing,” he says, “was suspicious.” At any rate, he needed another option.

It’s perhaps no surprise that many of Cohen’s friends — “people who weren’t political at all”–have come to look favorably upon organized labor. An annual Gallup poll conducted over the summer shows that adults in general support labor unions at 61 percent, the highest approval rating since 2009, when the poll found support for unions at an all-time low of 48%. A Pew Research poll conducted two years earlier shows that enthusiasm is largely driven by the 79 million millennials who currently dominate the workforce: 55 percent of 18 to 29 years olds, the poll found, approve of unions.

“What our generation has lacked, and needs, is stability,” says Maggie Thompson, who calls herself an “old millennial” (she’s 32) and studies labor trends for the Center for American Progress. “Unions offer that prospect of stability.”

Cohen couldn’t look for stability with his parents, as some do; they’d lost their house the year before. He had to get a job. Finally, he found one. UNITE HERE Local 11, a labor union for hospitality workers in Los Angeles, recruited him as a “salt.”

“They said, ‘Go get a job at this hotel, get in with the rank and file, and try to get them to organize.” The job paid near minimum wage. He took it.

Cohen, now 31 and working as a communication specialist for the union, saw firsthand on that job how solidarity brings out the best in people. At the Embassy Suites hotel in Irvine, California, he helped collective bargaining win employees back pay for denied rest breaks, a workers’ compensation settlement and, ultimately, respect. “It was a formative experience,” he says. But he worries his fellow millennials won’t have the same opportunities. Just as millennial enthusiasm for collective bargaining grows, labor’s political power and influence wanes toward a historic nadir.

“Why Did I Not Know About This?”

Twenty-eight states now have right-to-work laws that limit unions’ abilities to collect dues from workers, even if those employees benefit from negotiated contracts. More than a third of workers freelance as independent contractors, most of them without the protection of a trade union. And after two previous failed efforts to deprive labor unions of income by eliminating “fair share” fees — monies paid to unions by nonunion employees who benefit from collective bargaining contracts — the one the U.S. Supreme Court is currently mulling, Janus v. AFSCME, looks poised to succeed.

“I think [Janus] has got the potential to be extremely destructive, like national right-to-work laws,” Cohen worries. “I’m expecting at some point Trump’s administration is going to turn their full attention to labor. I’m fearing the worst.”

Cohen isn’t being dramatic. One of the most direct effects of both the “gig economy” and right-to-work laws has been to deprive unions of their members and, therefore, the dues they need to fight back. As much as millennials might approve of unions, few of them are members: Only 10.7% of wage and salary workers currently belong to a union, according to the latest count by the Bureau of Labor Statistics, compared with 20.1% in 1983.

One of the reasons for that, says Larry Williams, Jr., the 30-year-old president of the Progressive Workers Union, is that millennials literally don’t know that labor unions exist. Williams, whose union represents about 200 national field employees at the Sierra Club, says that he himself knew little about the labor movement before he took a temporary job with the Teamsters nine years ago. “I thought, ‘Why did I not know about this? Why is this not something that’s taught to every young person in the world, that they have rights as a working person?'”

His “discovery of the labor movement as a young man,” he says, inspired him to create UnionBase, which he describes as “the first social networking platform for organized labor.” Launched this past Labor Day, UnionBase allows workers to search for organizations that might represent their profession. Union leaders can also use it to verify their organizations’ information and, eventually, communicate with members. Ultimately, he hopes, the platform will help unions move beyond the traditional “servicing” model, where employees pay dues for union leaders to negotiate with employers on their behalf, to an organizing model, where workers mobilize to defend their own interests.

In that way, Williams says, “Janus is an opportunity. We need to stop this ATM that dispenses the contracts, and become an actual organization” that recruits and persuades. “Speaking far into the future,” he envisions the 14.6 million workers who belong to unions in the U.S. agitating for benefits that extend beyond the boundaries of their memberships and the corporations they work for.

“Union contracts can cover a wide array of things outside of your workplace,” Williams says, “like child care, health care, education. Before there was the Affordable Care Act, it was unions who negotiated the best health care for their workers.” That same health care should be available to everyone, he says.

“The idea is to make a bigger tent so as many people as possible can be covered by union contracts.”

That tent has a precedent in the U.S. In the 1960s, “Jimmy Hoffa worked to organize the truckers yard by yard,” Williams says. He didn’t stop until he had 450,000 truckers covered under a Master Freight Agreement. “[It] brought all of their wages in line regardless of state.”

“It was,” Williams notes, “the largest movement of working people into the middle class.” Whatever happens in the courts or Congress, the work of raising the working-class standard of living won’t change. “That’s always been the mission,” Williams says. “The mission doesn’t change.”

Andrew Cohen has no intention of abandoning that mission, either. “For me and a lot of my peers, if right-to-work passes and the union has no money, we’ll still work rank-and-file,” he insists. One of his colleagues, 28-year-old UNITE HERE campaign researcher Elle Farmer, suspects that won’t be necessary. While union membership has dropped nationwide, “UNITE HERE is growing,” she says. “We’re the fastest growing private-sector union in the country.”

Besides, says Farmer, who left a career as a public defender to work in labor, no change in any law can take away workers’ fundamental right to organize. “People have been forming bonds of solidarity the entire time we’ve been humans,” she says. People in her age bracket see that more clearly than ever. “They’re seeing that being joined together in something that is or looks like a union is the way that we actually live in a democracy. It’s the way we enforce democracy.”

“It’s not 100%, it’s not across the board, and it’s never perfect,” she adds. “But organizing around the conditions of our existence in this world will always be powerful.”

Get the latest Fast Company stories in your inbox daily.