If it's enacted, the GOP tax cut now working its way through Congress will be the start of a decades-long economic policy disaster unlike any other that has occurred in American history. - And this dire warning is from Forbes, the business publication. 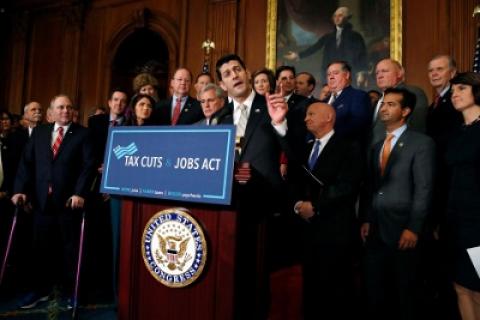 No doubt many of you read the above headline and immediately started to tweet that the GOP tax bill can't be the end of economic sanity in Washington because there never was any to begin with.

I have two responses.

Second...you're wrong. If it's enacted, the GOP tax cut now working its way through Congress will be the start of a decades-long economic policy disaster unlike any other that has occurred in American history.

There's no economic justification whatsoever for a tax cut at this time. U.S. GDP is growing, unemployment is close to 4 percent (below what is commonly considered "full employment"), corporate profits are at record levels and stock markets are soaring. It makes no sense to add any federal government-induced stimulus to all this private sector-caused economic activity, let alone a tax cut as big as this one.

This is actually the ideal time for Washington to be doing the opposite.  But by damning the economic torpedoes and moving full-speed ahead, House and Senate Republicans and the Trump White House are setting up the U.S. for the modern-day analog of the inflation-producing guns-and-butter economic policy of the Vietnam era. The GOP tax bill will increase the federal deficit by $2 trillion or more over the next decade (the official estimates of $1.5 trillion hide the real amount with a witches brew of gimmicks and outright lies) that, unless all the rules have changed, is virtually certain to result in inflation and much higher interest rates than would otherwise occur.

The GOP's insanity is compounded by its moving ahead without having any idea of what this policy will actually do to the economy. The debates in the Ways and Means and Senate Finance Committees and on the House floor all took place before the Congressional Budget Office's analysis and, if it really exists, the constantly-promised-but-never-seen report from the Treasury on the economics of this tax bill.

Meanwhile, Congress has ignored other estimates like this one from the University of Pennsylvania's Wharton School showing that the tax bill won't do what the GOP is promising.

In other words, the GOP tax bill may be enacted without anyone who votes for it having any understanding of the damage it could do to the economy. They have wishes, hopes and prayers but in reality nothing beyond the economic equivalent of pagan superstition.

[Stan Collender has been involved with the federal budget and congressional budget process throughout my entire career. In addition to being one of the few people who has served on the staffs of the House and Senate Budget Committees, I'm the author of The Guide to the Federal Budget, which was published annually from 1982 to 2000 and was one of the most-assigned texts on the topic. I founded and edited Federal Budget Report, a newsletter that was published for almost two decades. I've also written weekly columns on the budget for NationalJournal.com and Roll Call and founded the Capital Gains and Games blog. In addition to my work as an executive vice president of a global communications agency, I'm adjunct professor at the McCourt School of Public Policy at Georgetown University. I have a Master of Public Policy degree from the University of California, Berkeley, and a B.A. in Politics and Psychology from NYU. I live in the Washington, D.C. area.

The author is a Forbes contributor. The opinions expressed are those of the writer.]