We talk to the cast of Hulu's 'The Runaways' about what it means to represent their cultures on television. 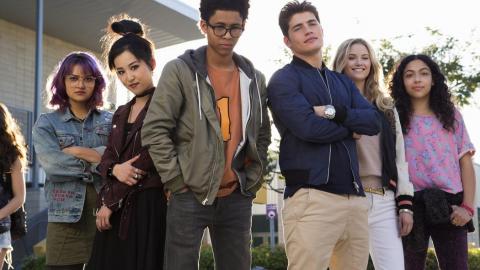 ,
Ariela Barer was told that one day she’d be a superhero, although she didn’t believe it at the time. While practicing complex physical movements during a theater class, she said the teacher told them, “You’ve got to get good at this. You guys are the superheroes of the future.”
“I always thought, I can never play a superhero. People like me aren't superheroes,” Barer told me in a phone interview. But now she’s starring in Hulu’s Marvel superhero drama Runaways, portraying Gert Yorkes—a highly political, nerdy Latina teenager who finds out she has a telepathic link with a genetically engineered dinosaur. You know, a superhero.
Runaways tells the story of six teenagers who find out their parents are actual supervillains in a powerful group called the Pride. After the discovery, each finds out that they have gifts of their own, from all-out super strength to alien DNA. Considering their ages, backgrounds, and mess of teen-related problems, it’s surprising that the Runaways could even be superheroes—emphasized even more by the diversity represented by the core cast, a stark contrast to the rest of the MCU canon. Out of the six leads, four are people of color and four identify as women; Barer represents one of two Latina characters, the other played by newcomer and actual 14-year-old Allegra Acosta.
“Growing up I never had a real strong, not-a-stereotype-of-a-race character I could look up to,” Acosta said. “A lot of times, the Latin community pushes to be showcased in television.” Lyrica Okano, who plays Japanese American sorceress Nico Minoru, has similar things to say about her experience. While Acosta is relatively new to show business, Okano says that she’s been struggling for years to play an Asian character with depth.
“As an Asian American in this industry, you don't get a lot of roles that call for backstory and exploring relationships,” Okano said. “Growing up, I never had a character or superhero that I could look up to—a superhero that looked like me. I felt like going into this, preparing for Nico, I did feel this pressure of doing it right and making Nico feel as real as possible.”
Marvel Studios has been hit with some criticism over the years regarding the diversity of its movies and TV shows. In The Avengers in 2012, the group was all white with one woman; in Doctor Strange, the studio came under fire for casting Tilda Swinton as a whitewashed version of the Master, a character that’s normally Tibetan. Marvel is slowly making strides, with Black Panther out next year and Captain Marvel in 2019. On Agents of SHIELD, two of its leads are women of Chinese descent; in the Netflix universe, Luke Cage garnered rave reviews partially for leaning into its culture.
The Runaways property, which debuted in 2003 in a comic by Brian K. Vaughn, is remembered for being diverse for its time. It, at least, was a start towards building groups of superheroes that weren’t all white. In the original pitch for the series, Nico was originally a girl named Rachel Messina before Vaughn decided to make her Japanese. In later issues, writers introduced characters to the team that were Latino and genderfluid. So it makes sense that Runaways showrunners Josh Schwartz and Stephanie Savage would build on this legacy. Molly and Gert, who were white in the original comics, are now Latina.
“We're still not quite there yet at this industry, but this show is a huge step into that path to making this a normal thing to see on TV: A group of diverse characters that have different backgrounds and different stories to tell,” Okano tells me.
After reading the comics and noting how unique the core group was, actress Virginia Gardner, who plays Karolina, says that it made her see the show in a different light: “I saw what a genius Vaughn was, breaking those six stereotypes. I saw the importance of Karolina Dean, a gay superhero...it's a very special role.” (While the episodes available to critics didn’t show Karolina struggling with her sexual identity, Gardner confirms that it’s a core part of her character’s arc this season).
Even in its typically white characters, like Chase (played by Gregg Sulkin), there’s some subversion. While Chase in the comics and in the show is first portrayed as a stereotypical dumb jock, his story reveals that he has some depth. “I think it's amazing that it's six lead characters with different backgrounds and from different parts of our lives,” Sulkin explains. “The charm of the show is that six kids you don't expect to be friends end up becoming a team to potentially save the world and to do something for the greater good.“
Rhenzy Feliz, who plays the de facto Runaways leader Alex Wilder, is aware of how important it is to play not only a black character at the forefront of a series, but as the leader of a superhero group. He said he dressed up as Black Panther for Halloween as another way to celebrate. “It's a great feeling. It feels like you're helping Hollywood, you're helping somebody out there,” he explains. “People are starting to realize it matters what it sees on our televisions, what we see on our movie screens.”
Follow Carli Velocci on Twitter.