Bacteria that are resistant to antibiotics kill 700,000 people a year worldwide. If we don’t find new treatments, the annual death toll could rise to 10 million by 2050. 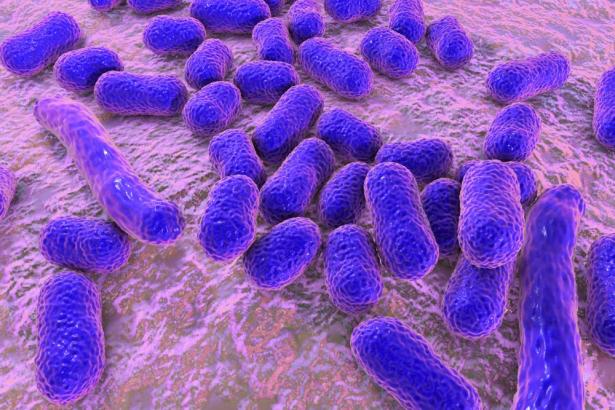 Changing someone’s genetic programming is easier than you might think. While techniques for altering DNA at the molecular level are becoming more widely used, it’s also possible to simply turn genes on or off without permanently changing the underlying genetic material. That means we can affect the genetic instructions that get sent to an organism’s body by changing its environment or with drugs.

This field of “epigenetics” is already helping doctors understand how certain diseases work, why exercise can be so beneficial, and how we might be able to alter the aging process. But my colleagues and I are trying to investigate the role of epigenetics in bacteria.

We recently studied a possible way to affect bacterial epigenetics that might be able to stop infections without using antibiotic drugs. And given that many bacteria are becoming resistant to existing antibiotics, that could open up a vital new way of treating disease.

Our study looked at the bacterium Acinetobacter baumannii, which is a major cause of the infections people can catch in hospitals and which kills up to 70% of people who are infected with it. Antibiotics no longer work on some strains of A. baumannii – and the World Health Organization recently ranked it as the greatest bacterial threat to human health.

We do already have some so-called antivirulence drugs that don’t kill bacteria but make them harmless so that the body’s immune system can clear them out without leaving any behind to become resistant to the drug. Coming up with a way to affect bacteria’s epigenetics rendering the bugs harmless could help us create new antivirulence drugs that would make a huge contribution to medicine.

To start this process this we first turned to human epigenetics. The most common way of affecting our epigenetics is to add a small molecular tag to our genetic material that turns on or off a related gene. In particular, we can add a tag known as an acetyl group to an important protein called histone. 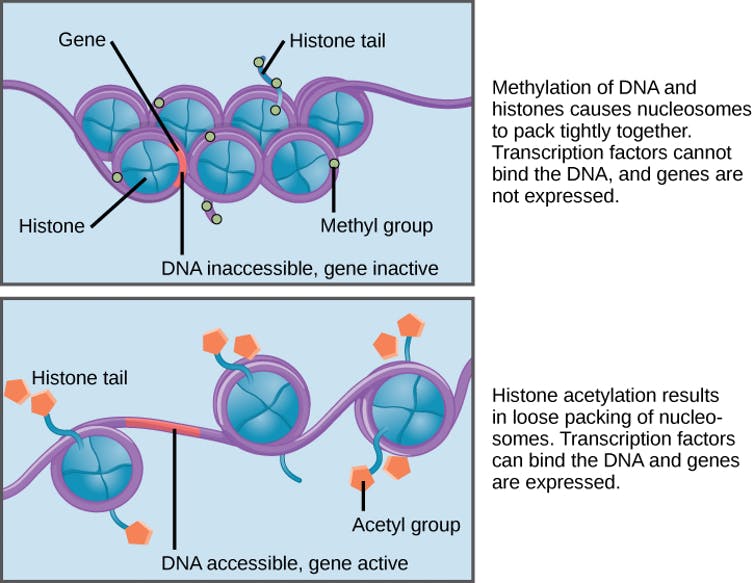 Adding an acetyl tag to histone. CNX OpenStax, CC BY

Histone organises our 2m-long DNA molecules so that they can fit neatly inside our 100 micrometre-long cells. Adding the acetyl tag is a natural mechanism used by cells to change the way histone interacts with DNA. Adding the acetyl tags normally activates certain genes, meaning they change the way the cell behaves. Failures in this histone modification process are linked to cancers, cardiovascular diseases and many neurodegenerative disorders.

Bacterial cells have their own version of histone known as HU, which organises their DNA and is involved in making all its functions work. Bacteria that are referred to as “Gram-positive”, such as the ones in our digestive system that help us break down food, can’t survive without working HU. And “Gram-negative bacteria”, which are typically the ones that make us ill such as Salmonella enterica, become much less harmful without HU.

In our study, we found that adding an acetyl tag to HU significantly affected the way it interacted with the DNA. This means it’s highly likely that such modification makes epigenetic changes, affecting how the bacteria grow and infect other organisms. So if we can create drugs that make these changes to bacterial proteins in this way, we could have a new way of stopping infections.

This is a really important challenge in medicine right now, because bacteria that are resistant to antibiotics kill 700,000 people a year worldwide. If we don’t find new treatments, the annual death toll could rise to 10 million by 2050.

Once we verify the link between specific epigenetic changes and bacterial infection, we can begin looking for substances that alter bacteria’s epigenetics in this way to make it less harmful. There are already several molecules targeting human epigenetics in a similar way under preclinical development or in clinical trials. So a drug that “turns off” bacteria’s ability to cause infections may not be too far away.

This article was amended on 15 December 2017 to state that the annual death toll from antibiotic-resistant bacteria could rise to 10 million by 2050, not 2025 as originally stated.

Yu-Hsuan Tsai is a Lecturer in Organic Chemistry, Cardiff University