When Trump Goes, Trumpism Will Remain

Donald Trump doesn’t control ‘Trumpism’. He is merely the current voice of the radicalised base. 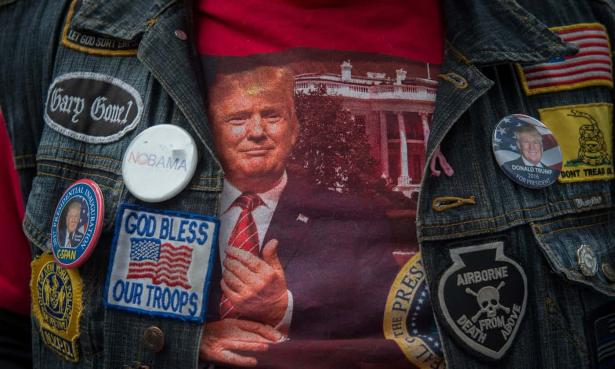 The author Tom Wolfe once wrote: “The dark night of fascism is always descending in the United States and yet lands only in Europe.” He was reflecting a consensus, shared by public and scholars alike, that far right politics is a European phenomenon, at odds with “American values”. It is a conviction so deeply held that it has left the US blind to reality.

Any example of far-right politics is explained away as exceptional, not representative of the “real” America, from “lone wolf” terrorists such as the Oklahoma City bomber Timothy McVeigh to the rise of Trumpism.

Rather than address the structural conditions that have made anti-government militias a permanent presence in the US, but not in any other advanced democracy, or which have fuelled previous populist radical right movements such as the Tea Party, explanations focus on individuals such as Donald Trump or their Rasputin figures such as Steve Bannon.

Calling the far right 'un-American' might make for good politics, but it expresses a blatant lack of historical understanding

This “externalisation” of the far right was at its height during the 2016 presidential campaign, in which Trump was portrayed as a political anomaly who had hijacked the Republican party. Conservatives and mainstream Republicans argued that he didn’t really represent what was at heart a moderate conservative party. They found much support among liberals, most notably Hillary Clinton, who focused much of her campaign on “moderate Republicans”.

However, for years surveys have shown that strong authoritarian, nativist and populist positions command pluralities, if not majorities, among Republican supporters. Positions on crime, immigration and Islam have hardened rather than weakened, while conspiracy theories that were at the fringes of the militia movement in the 1990s are now widespread.

The shift has been encouraged by generations of Republican politicians: remember Ronald Reagan’s use of the term “welfare queens”, and Newt Gingrich calling sharia law “a mortal threat to the survival of freedom in America”?

What the increasingly forgotten rise of the Tea Party indicated several years before was simply confirmed by the rise of Trump: the Republican establishment had radicalised its base to such an extent that it was no longer representative of its views. Trump didn’t hijack the Republican party, he provided the base with a real representative again. But just as the Koch brothers didn’t control the Tea Party, Trump doesn’t control “Trumpism”. He is merely the current voice of the radicalised base.

While the rise of Trump and Trumpism is in part fuelled by similar factors as the rise of far-right parties in Europe, including globalisation and mass immigration, it has long roots within American history.

From the Know Nothings in the mid-19th century to Trump today, the US has seen far-right challenges in the form of the second coming of the Ku Klux Klan, which claimed the support of almost 15% of the population in the 1920s, the anti-desegregation campaign of Alabama governor George Wallace, who won 13.5% of national votes and five (southern) states as a third-party candidate in the 1968 presidential elections, to the Tea Party just a few years ago, in many ways laying the foundations for Trump’s presidency.

The spread of the far right into areas not immediately identified with it is not limited to Trumpism. It has been on full display since the deadly demonstration in Charlottesville. Over the past months we have been obsessing over the threat of the so-called alt-right, while ignoring much more dangerous anti-government movements such as “sovereign citizens”, who are considered the number one domestic threat by law enforcement agents.

It is easy to denounce the alt-right, as Democratic – and Republican – leaders did after Charlottesville. But while calling the far right “un-American” might make for good politics, it expresses a blatant and dangerous lack of historical understanding. Populist radical right ideas such as Trumpism have always been widespread within white American society.

Just as the Republican establishment couldn’t control Trump, Trump can’t control Trumpism. It has been here before him and it will be here after him, because it is part of American political culture and history. The sooner we all realise this, the quicker we can develop an effective strategy to overcome it.