film The Lefty Critique of #TimesUp Is Tired and Self-Defeating

The #TimesUp action was organized by and for women of color activists that reached millions. What’s wrong with that? 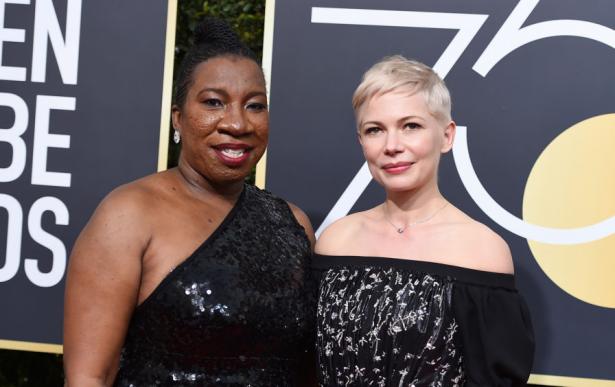 This year’s Golden Globes were the best kind of anomaly, as women artists and activists took it over with #TimesUp, signaling an end to silence and inaction on sexual harassment and abuse. All the women wore black; men sported #TimesUp pins. Seven celebrity actors took women activists of color as their dates to raise the visibility of particular industries and communities. The campaign has raised more than $16 million for a legal defense fund. Several winners spoke to the issue (though none of them were men), and the night ended with Oprah Winfrey’s focused and moving acceptance speech for the Cecil B. DeMille Award.

The next morning, I was disappointed to find the specious critiques I’ve come to expect from progressives whenever we manage to pull off something big. These revolved around familiar themes:

Trapped in binaries, we get confusing messages about how social change happens, both from the larger culture and from our own lefty culture. It only takes a few vs. it takes millions. It’s all about policy or it’s all about culture shift. We only need civil disobedience or we only need to win elections. No one knows exactly what formula will ward off the authoritarianism looming over our country and the world, but that formula probably doesn’t include the word “only.” There should and will be many tactical experiments in this period of political, cultural, and spiritual churn. Critique is easy. Actually running such an experiment is hard.

On Sunday night, Alicia Garza asked on her Facebook timeline what we think is required to build a movement in the millions. In my humble 33-year view of social change, I believe that it takes everything. Everything we’ve got. Every member, every leader, every ally, every platform, every tactic and every dime—all directed toward specific goals at specific moments. The moments when your big ideas have the potential to become reality don’t come around that often. When they do, we have to move. We can’t predict what will come out of each tactic, but we move fast and big and on faith.

#TimesUp is grounded in a progressive movement where racial justice, feminism, and workers’ rights meet. For years, organizations have worked to change the national narrative around work, violence, immigration, policing, and many other issues. Understanding that policy and politics were inadequate to the transformational task at hand, they added cultural change to their toolkit. Through praxis, they’ve developed a theory of how to create cultural flash points and forged strong relationships with artists. The National Domestic Workers Alliance, for example, has been doing Golden Globes watch parties for several years and has made a big investment in giving women entertainers like Amy Poehler a chance to support domestic workers. The Restaurant Opportunities Centers United has connected with foodies and celebrity chefs. Tarana Burke, who created the #MeToo hashtag a decade ago, took advantage of the current moment, to historic effect.

After the Weinstein news broke, Alianza Nacional de Campesinas, which represents 700,000 women farmworkers, wrote an open letter to the women of Hollywood, expressing their sorrow and outrage over the horror stories, and sharing a few of their own from the fields. On New Year’s Day, the women of Hollywood wrote back, launching #TimesUp and vowing to make change not just in their industry, but everywhere, and launching a new legal defense fund. Various networks came together for this campaign, some of them pretty informal, but a good portion of the work happened through Harness, a community of artists and activists gathered by colleagues, including America Ferrera and Paola Mendoza.

In my 33 years of social-justice work, this was one of the most effective actions I’ve seen, crafted by some of the best organizers I’ve ever known, and I’ve known many. One pitfall of celebrity actions is that they raise awareness but no actual action, a pattern that depresses engagement rather than fuels it. #TimesUp had a clear starting call—give money—and the campaign has added some $700,000 and counting in the last 36 hours.

The message discipline was also impressive. I watched a great number of interviews Sunday night before the show on E, Facebook, and NBC, and the vast majority of them included questions about sexual violence and harassment. While not every actor and activist got to all of the messages, they had clearly coordinated to repeat a few crucial themes. “Not just in this industry but every industry.” “This is not a moment, it’s a movement.” “Give to the #TimesUp fund.” I don’t know any details of how Oprah’s speech got written, but it’s obvious that she, too, had been organized.

After these big cultural moments, I always hear two refrains: “That’s just symbolic, not real change,” and “This is nice, but the question is, what actions are they really going to take?” Hell, I’ve said these things myself before I knew better. But symbols matter, and there are better questions to ask. Our affinity for symbols is the main thing that makes us human. If the left can’t deal symbolically, we are truly sunk. And of course “What actions are they going to take?” is the next question after an NFL protest/women’s march/Golden Globes moment. Duh. I’ve pledged to work harder, bypass that obvious question, and go straight to this one: How are we going to make the next thing happen?

I keep hearing that celebrities are too shallow to do much beyond sartorial protest, and to that I say, so what? Most people are too shallow to do more than the bare minimum on anything. I’ll take that shallow action over nothing any day. In fact, let’s go even further and lower our bars for participation on everything, so people can do something shallow and then do the next thing.

Some activists don’t want any of our campaigns to reach millions because that would mean they had gone mainstream and been stripped of radical heft. Well, I’m grateful for many results of campaigns that went mainstream in the past: the weekend, clean water, the right to vote. We’d have none of these if someone’s organizing and art hadn’t reached millions of people. The notion that we should keep our ideas out of the mainstream so they don’t get corrupted reflects self-protective fear, not the basis for a strategy for social change.

Finally, we get to shade directed at the activists who went to the show—Saru Jayaraman, Ai-jen Poo, Tarana Burke, Rosa Clemente, Monica Ramirez, Marai Larasi, and Calina Lawrence. These are women who have given their lives to social justice, to the fullest form of feminism, women with their eyes always turned to the “next.” Burke has been organizing with tiny, tiny resources for years at Girls for Gender Equity. The success of #MeToo aside, I suspect those resources are still pretty slim. Are we really going to drag her for organizing celebs and going to the Golden Globes? Come on, people. I understand envy—I feel its twinges too, because I am human and a Scorpio to boot. But I release the feelings to my mother or bestie or therapist—and then I get on the bus. Because everything is required now. Not tomorrow, after I’ve read the critiques and decided whether or not I can support, but right now.

[Rinku Sen is Senior Strategist at Race Forward and a James O. Gibson Innovation Fellow at PolicyLink. She blogs at rinkusen.com on the Maven network.]