The election at the LA Times comes on the heels of a recent spate of successful media union drives. 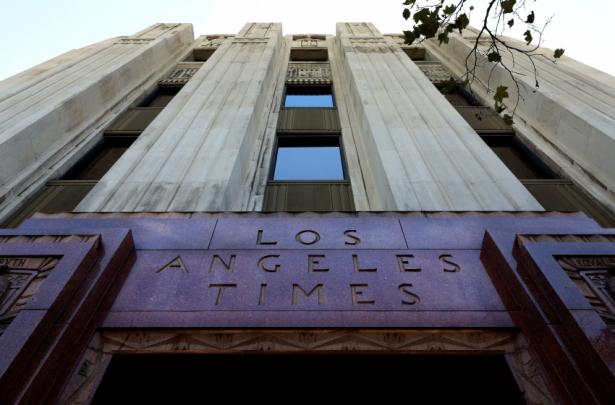 The election at the LA Times comes on the heels of a recent spate of successful media union drives., Photo By Raymond Boyd/Getty Images

Update: On Friday, January 19, the News Guild announced that Los Angeles Times journalists had voted overwhelmingly in favor of a union, 248-44. The victory will lead to the paper's first staff union, after 136 years in operation. Kristina Bui, Guild organizer and a copy editor at the LA Times, told the paper, “This was a long time coming, and we're all thrilled that this has finally happened. The newsroom has put up with so much disruption and mismanagement, and this vote just underscores how much of a say we need to have in the decision-making process. The newsroom is demanding a seat at the bargaining table."

Emily Alpert Reyes and Carolina Miranda are among the Los Angeles Timesnewsroom staff anxiously awaiting January 19, when they will find out whether the year-long campaign to organize their workplace has been a success.

Staff voted January 4 on whether to join the NewsGuild-Communications Workers of America, and Miranda and Alpert Reyes—along with many News Guild organizers—believe that a majority of eligible employees voted for the union. An official count will occur after the January 18 deadline for mail-in ballots from employees in remote bureaus.

Certification as a union workplace would mark a major milestone for the venerable publication and fourth most widely read newspaper in the United States. And it would cut against a long anti-labor history at the LA Times.

If the union does come out victorious, then the hard work will really begin: negotiating a contract with a company notoriously hostile to unions in an increasingly precarious media ecosystem.

Miranda, a staff writer covering culture “from high to low,” previously worked in two other unionized newsrooms—Time and Newsday.

“It wasn’t that unions made anything perfect,” she says. “But we had a modicum of protection. There were negotiated severance packages, layoffs only for just cause—not at will. The company couldn’t change our benefits unilaterally. Here at the LA Times, we work with no protections whatsoever. We’re at-will employees, the company can change our benefits whenever they want, and we can’t really fight it.”

Miranda notes that today there are few journalists who don’t feel the “specter of lay-offs” hovering over them. The LA Times currently employs around 500 newsroom employees, down from 1,200 at its peak around the turn of the millennium. The staff has since been pared down by multiple waves of layoffs and buyouts, including a mass layoff of 250 people in 2008.

City Hall reporter Alpert Reyes previously worked at the nonprofit online outlet Voice of San Diego, until she was laid off six years ago. When she was hired at the LA Timesshortly after, she was thrilled. Now she’s focused on making sure she and her coworkers have job protections in place.

“The constant here is the folks who are producing the stories, making amazing photographs, putting the paper together,” says Alpert Reyes. “We need a voice for ourselves, not only for our own job security, but really for the survival and the continued thriving of the paper.”

The election at the LA Times comes on the heels of a recent spate of successful media union drives at outlets including In These Times, the Chicago Reader, HuffPost, Vox and Vice Media.

The LA Times is owned by the media company Tronc, formerly the Tribune Publishing Company, which also owns the Chicago Tribune and is known for its conservative and anti-union stances. The 136-year-old LA Times’ own anti-labor history goes all the way back to its first publisher Harrison Gray Otis, who mercilessly fought unionization in the late 1800s and early 1900s. During his tenure as the LA Times publisher, Otis brought in scabs to break a typographers’ strike in 1890, organized other business owners into an anti-union association and worked tirelessly to suppress labor organizing at the paper.

James O’Shea, who served as LA Times editor-in-chief from 2006 to 2008, says that staff unionization would be “pretty historic given the LA Times has traditionally been fiercely anti-union.” O’Shea left the paper in 2008 over disagreements with top management over plans O’Shea thought would lead to drastic budget cuts and layoffs. He says the financial challenges facing newspapers such as the LA Times are dire, and that it is in the interest of both management and unionized employees to work together to overcome them.

“Neither side has the time to carry on a war,” says O’Shea, whose father was president of an electrical workers union in Des Moines. “They need to get down to the business of figuring out what to do. These problems have been developing for over 10 years, they were bubbling up when I was there. Trying to figure out if you can meet the next challenge by laying more people off, that’s not the answer. The key question is, How are you going to finance quality journalism? That’s the question facing the whole industry.”

Dave Roeder is a consultant for the Chicago News Guild. He sees the LA Times’ potential unionization as an inspiration for other newsrooms. Roeder previously worked at the Chicago Sun-Times where he served as a business reporter and columnist until 2013. And, as part of his work with the News Guild, he helped organize the recent purchase of the Sun-Times by the Chicago Federation of Labor and investor Edwin Eisendrath.

“[The LA Times union drive] has prompted a lot of discussion among journalists here in Chicago who are not in a union,” Roeder says. “Is it a time to organize so we can better advocate for ourselves with ownership? In the difficult state of this business, you find old-line media that are in the hands of owners who may not have journalism as a core principle; they might just be interested in mining a company for assets, selling what they can, and leaving the rest. The case for being in a union in this field in particular is very clear right now.”

Miranda and Alpert Reyes say they hope a union can help provide stability and a voice for employees by fighting for policies such as advance notice of layoffs, standardized minimum salaries, competitive parental leave and the ability to cash out or roll over unused vacation time.

Alpert Reyes says management’s changes to vacation policy last year were a major blow for many reporters, replacing earned vacation time with the possibility to request “infinite vacation” from a supervisor.

“In the past you had a set amount each year and if you didn't use it, it would roll over,” Alpert Reyes notes. “If you left the paper you could cash out that vacation, you had some financial security, or some people used it to pad maternity leave.”

She adds that employees also want a union to help “ensure equal pay for men and women and journalists of color; and make it the kind of place where you can have a career path, where there’s some possibility of raises—not just a place that has a revolving door.”

Since the unionization effort began in late 2016, LA Times employees have reported that management has engaged in anti-union tactics such as distributing anti-union fliers and suggesting that employees who joined a union would have to renegotiate their benefits, as reported by the New York Times.

LA Times spokesperson Hillary Manning said in a statement that: “Whether the Los Angeles Times newsroom has a union or not, we are united as one organization with an important purpose. We are committed to providing the independent, trustworthy journalism that our readers rely on.”

Miranda says the company told employees that union organizers are “bringing in a third party to come between the employees and management, that the union can’t guarantee any of the benefits they’re describing … that reporters would be sacrificing their independence if we signed on to a union. All the bogeyman anti-union scare tactics.”

After management emailed employees saying that “unionization will not and cannot address our industry’s extremely difficult business conditions,” LA Times national correspondent Matt Pearce pointed out on Twitter that the company recently agreed to pay a company owned by venture capitalist and Tronc major shareholder Michael W. Ferro Jr. $5 million a year for consulting over the next three years, as laid out in a Dec. 20, 2017, filing with the Securities and Exchange Commission.

“There is money in Tronc’s budget for raises,” Pearce tweeted, “Just not for you.”

O’Shea says he would advise LA Times management to work earnestly with the union.

“If they enter with the idea unions are evil things and they're going to destroy our company and they do everything they can to break [the union], that would be a disaster,” O’Shea says. “If they're smart, they’ll say these people voted to be in the union, they want representation, we should make the table big enough, we should listen to them, convince them we really have a problem here and if we don't work together to solve it that will be to the detriment of everybody.”

When O’Shea was a reporter at the Des Moines Register in the 1970s, unionization was narrowly voted down after a contentious campaign that O’Shea says “left a bitter legacy.” “It really tore the newsroom apart. Longtime friendships were broken, it was just awful,” he says.

Alpert Reyes says the year-long unionization campaign at the LA Times has been a very different story: a largely positive experience that has brought newsroom employees closer.

“One of the really great things about this whole process has been getting this sense of banding together across different parts of the newsroom and getting to express our appreciation for each other in ways that don't really happen over rushed deadlines,” she says.

While some of her colleagues are opposed to unionizing, “my hope is that we can show them that no matter how you voted, we are here to fight for you,” Alpert Reyes says. “We want a voice, we want a seat at the table, and we want some way to protect the things we love about this place.”

Kari Lydersen, an In These Times contributing editor, is a Chicago-based reporter, author and journalism professor at Medill at Northwestern University, where she is fellowship director of the Social Justice News Nexus. Her work has appeared in the New York Times, the Washington Post, the Chicago Reader and The Progressive, among other publications. Her books include Mayor 1%: Rahm Emanuel and the Rise of Chicago's 99 Percent., Shoot an Iraqi: Art, Life and Resistance Under the Gun and Revolt on Goose Island: The Chicago Factory Takeover, and What it Says About the Economic Crisis.