Democracy is the Road Toward Socialism

A Discussion of "Hegemony How-To" by Jonathan Smucker 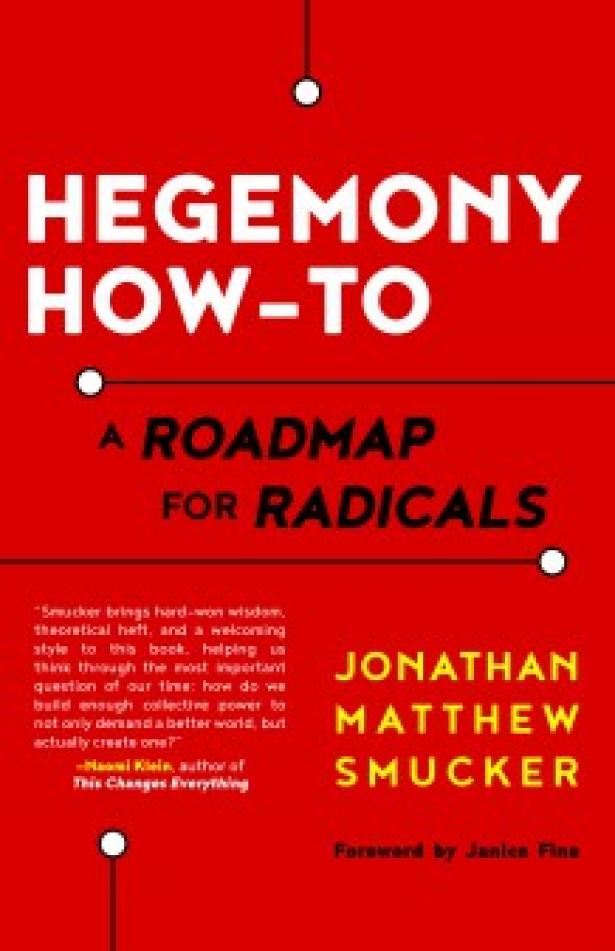 “I don’t care about your feelings. I care about the power to change the structures that are oppressing you.” Not terribly nice but this conversation started one of the closest political relationships I have. The first part is a flippant reference to the difference between being friends versus being comrades. The second is about what we should be seeking in the current world: the power to change the world we live in, in ways both small and large. That’s also what we’re trying to do in Democratic Socialists of America.

I’ll admit I’m a sucker for good prose and Hegemony How-To by Jonathan Smucker definitely fits the bill. His subject is power, which marks him as part of the same move DSA is part of: to synthesize the little victories and big defeats of the Left in the U.S. into something new and vibrant and capable of winning. There are now several generations of Americans for whom the Cold War is history and the knee-jerk anti-communism of certain sectors of the Left seems like its own kind of sectarian behavior. We may be appalled by the Soviet gulag, but we’ve also grown up in the age of mass incarceration here in the United States. Many of us may have missed out on the capitalist triumphalism of the 1990s, but we’re all quite comfortable in insisting that there is an alternative.

There’s been a minor amount of ink spilt both within DSA and outside it about what the hell we’re doing over the last year and Smucker’s book is as good a guide as any to our transition from potential force to organizing for power. I’d like to share some thoughts and pose some questions for further discussion about the road forward for all of us.

The Left has been in a long tactical withdrawal for decades now. Our institutions, whether labor unions or community organizations, have been focused on defending past gains and the survival of the poor, working class and even middle-class. Assaults from the right have undercut many victories, whether it’s the Voting Rights Act or ‘Right to Work’, a troll-worthy name if ever there was one. As Jane McAlevey writes in No Shortcuts, many of the institutions of the Left have dissipated into advocacy-focused campaign organizations. The suffering inflicted by our defeats have led to an array of organizations focused on triage rather than fighting the root causes of that suffering. Rather than people power, there’s been a turn towards trying to fight capitalists on their own turf, an arena where we will always be outclassed in terms of money and influence.

It’s been an honorable defeat but I think we’re done with that now, right?

And that’s the essential pleasure of reading Hegemony How-To: this is an organizing manual with an eye to both the strategy and tactics required to gain the power to protect one another from capitalism and build beyond it. Smucker is crystal clear about the political analysis he expects his audience to share and moves briskly forward. Our enemies- the Republicans, their funders and their evangelical churches- have an unwavering focus on where power actually resides in our society and are willing to discard every liberal institution that can not be shaped to their purposes. We need to be equally as clear-sighted in developing the tools to move beyond the habit of noble but pointless defeat.

Smucker focuses in part on the cultural life of organizations; this makes an excellent update to Hal Draper’s classic “Anatomy of a Micro-Sect”. While Draper’s language can feel a bit obtuse, his description of the sect’s propensity for the performance of loyalty to leadership and obscure political language is one kind of warning from the past; Smucker’s is another. He describes with compassion the turning inward that many on the left have engaged in to survive, whether in the form of personal isolation, small scattered reading clubs, affinity groups or leftist sects. Like Smucker, I was deeply involved in Occupy Wall Street and would argue that OWS is best understood as a place to figure out what moved you and then to go out and do something about it. In Smucker’s formulation, OWS created the ‘lifeworld’ or community that let so many of us go out, renewed and reinvigorated, to open the space for the Fight for 15, Warren and Bernie Sanders and now DSA

Smucker’s illuminating discussion of the creative tension between prefigurative politics and direct confrontation with capitalist elites, between internal culture and external organizing, is one that DSA is currently debating. Very few Americans of almost any generation have direct experience of collective political action. How do we gain that experience in the world around us without falling into either the bad habits of the Left as it is right now or the characteristic alienation of life under capitalism? Here’s where prefigurative politics- engaging in anti-oppression work and community building within the Left- is an absolute requirement for our mass organizing. In the name of unity and moving forward, the Left has made a habit of putting aside structural features of capitalism as it actually exists: white supremacy, patriarchy, ableism and so on. Socialism can only work when we’re attacking all the ways that capitalism attacks us.

Smucker rightly points out the internal-facing rituals that small groups use to create shared identity and how they create a barrier to entry. He is also concerned with- though more vague about- the need to broaden and deepen political engagement across boundaries, particularly for the Left to break out of its isolation. Certainly, we need to develop a means of objectively applying our subjective experiences into tangible political strategy. Smucker’s call to action around normalizing political action, about taking it out of a niche, out of ‘lifestyle socialism’ into a common experience is certainly true. There is, however, something a little shallow in his use of narrative as the path forward. Where’s the analysis of power? Where’s the mass grassroots strategy? I suspect the story is written as we answer precisely those questions.

One of my favorite examples of navigating this territory is the recent work of Houston DSA. Like Occupy, 9/11 and the never-ending wars we’ve been put into, Hurricane Katrina in 2005 was a landmark event. Its aftermath demonstrated the immense cruelty and intractable connections at the heart of white supremacy and capitalism and, as Hurricane Harvey approached, our chapters began to prepare their response.

The Houston chapter put together a strategy that comprised several elements for their work:

As their forthcoming report will detail, the Houston chapter benefited from DSA’s ‘Big Tent’ approach to socialism. We can pull from a wide array of methods for both sides of this work: the prefigurative, anti-oppression work to develop strong communities of resistance as well as the external-facing organizing to take the battle to the enemy.

The Florida state chapters have also written an excellent report that I encourage people to read over and many chapters, including my own in New York City, have supported relief work by grassroots organizations in Puerto Rico.

We are working to develop a political analysis of the terrain coupled with a variety of tactical options from electoral work to mutual aid to internet memes. Internet memes? Don’t ask. Really, don’t ask why, but some the hardest-working organizers in my own NYC chapter were vastly amused by the fact that there exists a Leftist sect called the Posadists whose founder has the same name as a Golden Gloves winning catcher for the Yankees. This somehow turned into a joke faction called the Posadists that made memes with dolphins and aliens and generally mocked the overly serious but often pointless factional infighting of the left. When Hurricane Harvey and Hurricane Irma hit, they decided to get off the internet and held two very successful fundraisers to support the substantive work that that our Florida and Texas comrades were engaged in. Balancing internal community building with external recruitment- finding authentic and meaningful ways to describe the moment while not removing ourselves from the world around us- is happening in real time within DSA.

These are also questions at the heart of No Shortcuts, the next organizing book I’ll be writing on. In the meantime, here are some further thoughts on how to apply the lessons from Hegemony How-To to the work- building a mass movement of the Left- before us. DSA- and the Left more broadly- will only grow if we’re open to building a movement that is constantly renewing itself. When we bring more people into our community, that community will necessarily change and we need to embrace those changes, even when they challenge the existing pre-figurative arrangements we’ve put together. But a shared analysis alone isn’t sufficient for building relations of activism that will build power. Something else has to happen. My own work with the National Training Team within DSA is to create the space where we can articulate our different experiences and stories of self in such a way as to get to collective action. And that’s the crux of DSA’s approach to the current moment: democracy is the road that gets us to the socialist horizon.

Democracy gives us the power to collectively determine the shape and direction of the world around us; socialism requires us to expand this to the furthest extent in the shape of the state, the economy and culture. Walking that road is how we’ll learn what comes next. We believe that power is at the heart of democracy and we can measure our progress, our achievements by expanding the power ordinary people- the masses- have over their own lives and gutting the power of elites of all kinds to control and direct our lives. This dovetails well with McAlevey’s argument that durable wins come when they are rooted in working class communities and build their power to defend and extend those wins.

As Smucker says, ‘Organizing is a mess, not a refuge.’ So is the world around us and we shouldn’t be afraid of it anymore.