The bonds of memory and today’s vast disparities in wealth and well-being tell us that we must continue the struggle launched by workers and by King in the spring of 1968. Today, more people live in poverty in America than in 1968. Now as then, the majority of the poor are “white” but poverty’s heaviest concentration is among people of color, especially young people and women. Poverty exists in part because most of the new jobs in Memphis, as in America, do not pay a living wage. 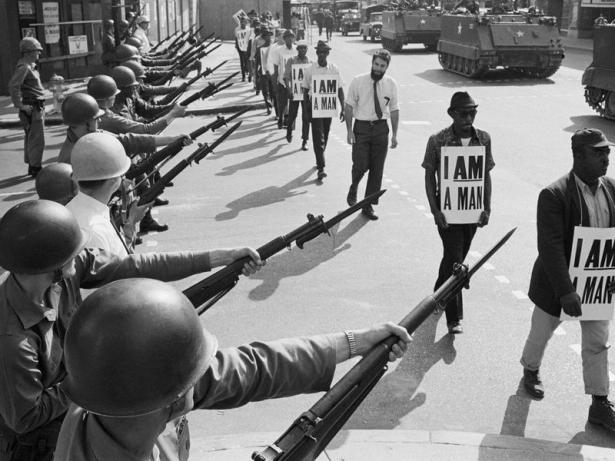 National Guard troops lined Beale Street during a protest on March 29 , 1968. “I was in every march, all of ’em, with that sign: I AM A MAN,” recalls former sanitation worker Ozell Ueal. ,

On Feb. 1, 1968, Echol Cole and Robert Walker were crushed to death while riding out a cold, driving rainstorm in the back of an outmoded “packer” garbage truck in Memphis. Unsafe working conditions, racism and abuse had long been intolerable for the city’s 1,300 sanitation workers. On Abraham Lincoln’s birthday, Monday, February 12, they refused to go to work. Later attacked by the police, the news media, and the city government, their fight under the banner “I Am A Man” for union rights and a living wage marked a turning point for the movements of the 1960s from civil rights to economic justice.

In a remarkable speech at Bishop Mason Temple on March 18, Rev. Dr. Martin Luther King, Jr., told the workers, “You are reminding, not only Memphis, but you are reminding the nation that it is a crime for people to live in this rich nation and receive starvation wages. And I need not remind you that this is our plight as a people all over America.” King made Memphis the first stop in his projected Poor People’s Campaign to shift America’s priorities from funding war and the accumulation of private wealth to providing housing, health care, education, and jobs or sustainable income for all.

Fifty years later, on February 1, public employees across the USA held a moment of silence honoring Cole and Walker. On Monday February 12, advocates of “The Fight for 15” march again in Memphis to demand a living wage. Rev. William Barber and Liz Theoharis, leading a new Poor People’s Campaign, will go from Memphis to Marks, Mississippi, as King did, to protest the continuing crime of deep, unrelenting and unrelieved poverty in the richest nation in the world.

The bonds of memory and today’s vast disparities in wealth and well-being tell us that we must continue the struggle launched by workers and by King in the spring of 1968. Today, more people live in poverty in America than in 1968. Now as then, the majority of the poor are “white” but poverty’s heaviest concentration is among people of color, especially young people and women. Child poverty in Black Memphis is over 40 percent. Nearly a third of the city’s African American population lives in deep poverty, another third lives on the edge of poverty, and while another third of “middle class” people remains only an illness or a paycheck away from economic difficulty.

Poverty exists in part because most of the new jobs in Memphis, as in America, do not pay a living wage. Workers live under strained economic circumstances and undocumented immigrant workers are punished while Congress funnels billions in tax breaks to the richest one percent and prioritizes military spending over human needs. Overall poverty remains about the same today as in 1968 but the percentage of people in “deep poverty” has risen. According to the Poor People’s Campaign’s National Call for a Moral Revival, fifteen million more Americans are poor today than fifty years ago. This does not count the millions of undocumented workers living in deep poverty, while most Native Americans on the reservations live in catastrophic conditions.

Increased poverty results from many factors, but high among them for employed people is the loss of union rights. The Supreme Court will soon decide whether state “right to work” laws outlawing mandatory dues for workers represented by a union become the law of the land. Memphis sanitation workers demanded dues check off for all workers in order to create an effective union, at a time when unions were a powerful force for worker rights and living wages. Not only in the South but in Wisconsin and other states, anti-union campaigns over the last fifty years have decimated the working and middle class. King called “right to work” a sham providing “no rights and no work.”

Not until after King’s murder on April 4 did the City of Memphis recognize Local 1733 of the American Federation of State, County and Municipal Employees (AFSCME) but Tennessee’s anti-union laws and political interventions have kept unions weak. The privatization of public jobs and a new flood of non-union, cheap-wage service economy jobs have likewise kept most Memphis workers mired in the ranks of the working poor.

In the era of Trump’s Republican Party, workers today are using the power of remembering to reinvigorate a movement to end poverty and demand a living wage. Let’s make America great again: join a struggle for economic justice and union rights today.

Michael Honey is the author of TO THE PROMISED LAND: MARTIN LUTHER KING AND THE FIGHT FOR ECONOMIC JUSTICE and the award-winning GOING DOWN JERICHO ROAD: THE MEMPHIS STRIKE, MARTIN LUTHER KING’S LAST CAMPAIGN. He is the Haley Professor of Humanities at the University of Washington Tacoma.