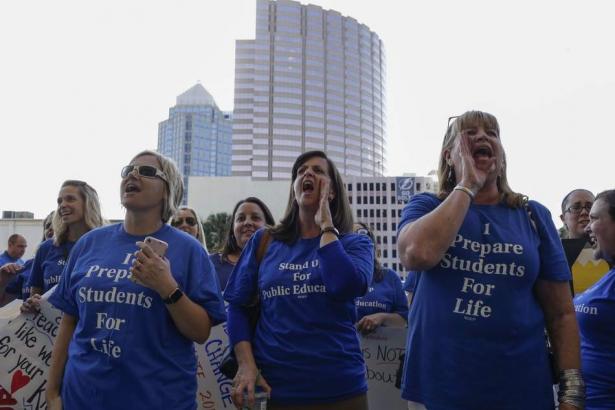 Scores of teachers gathered in November to protest at a School Board meeting in Tampa, where the Hillsborough Classroom Teachers Association is engaged in a long and contentious contract battle with the district. A new state law requires teachers' unions , Gabriella Angotti-Jones | Times

Life without union representation is not a distant fear for Russell Baggett.

Until two years ago, the Calhoun County school district in northern Florida had no collective bargaining unit to support teachers.

"We had no contract," said Baggett, president of the two-year-old Association of Calhoun Educators. "They would say, yes, there is money for a raise or, no, there isn’t. Whatever they decided, went."

The passage of new collective bargaining rules into law this month has Baggett and teachers across Florida on edge, with fears that they could be headed back to the "bad old days" without a voice.

At issue is a new law requiring local unions to prove they represent a majority of the teachers in their districts. The measuring stick: Having at least half of all employees eligible to be in the union paying dues.

If they fall short, they could lose their authority to negotiate working conditions and pay with the school boards. And many might find themselves in that spot: Some larger districts including Miami-Dade and Pasco hover just below the level, as do some smaller ones including Calhoun.

The big question is, what would happen next? Are unions that miss the mark dissolved, and their contracts along with them?

It’s one that state Sen. Tom Lee, a Brandon Republican, repeatedly asked during debate on the provision, which he deemed spiteful and mean-spirited to the state’s nearly 200,000 teachers and other instructional staff.

And the answer remains unclear.

"That has never been put in the record with any degree of credibility," Lee said. "No one has ever stated what the legislative intent was."

These provisions, championed by state House leaders and supported by the Koch brothers’ Americans for Prosperity, sparked perhaps the greatest outcry in the legislative session that wasn’t related to school safety.

Ron Meyer, a Tallahassee lawyer who regularly represents the Florida Education Association, suggested that the Legislature created a "sloppy and stupid" law that is more disruptive than anything.

He contends that the Florida Constitution does not allow legislators to pass a law that impairs the rights in an existing contract. Even if a union cannot maintain certification as an exclusive bargaining representative for the teachers, Meyers argued, "there is a contract that is in force and effect. … Any collective bargaining agreement would remain in effect."

He said the FEA would be ready to sue over the issue.

John Showalter, general counsel for the Public Employees Relations Commission, wasn’t so sure.

Showalter said the process lawmakers set up, though cumbersome, could be the clearest way to keep representation — and existing contract terms — intact.

First, a union submits its registration to PERC, now with its participation report. If it doesn’t have 50 percent of all eligible personnel paying dues, it next can submit a petition signed by 30 percent of the bargaining unit seeking a new certification vote.

Currently, the FEA reports that all but maybe a dozen local unions are below the 50 percent threshold, and they’re pretty close. Numbers are "fluid," communications director Sharon Nesvig said, depending on when teachers retire and get hired.

In a certification vote, just half of those people who submit ballots have to agree to keep the union — regardless of whether they ever pay to join. If that happens, they’re in business, at least until the next renewal.

If it doesn’t, though, the way forward could leave teachers in a more tenuous position.

The faculty would not be allowed under law to seek another union vote for at least a year, Showalter said. And during that time, its existing contract could very well be nullified.

"Generally, if one party is no longer certified, it’s been my assumption that contract just goes away," he said.

That scenario could leave teachers and other instructional employees, such as classroom aides, without any organization to bargain on their behalf. They could go to the district individually to represent themselves, or the district could impose terms of employment without negotiating.

In a Facebook post to members, Baggett of Calhoun County’s union fretted that even if the union eventually returned after a decertification, "it has to start over again and bargain a new contract from a blank slate."

Bob Boyd, general counsel for the Professional Educators Network of Florida, said the alternative to collective bargaining is not as bad as some represent. His organization provides legal and liability coverage for teachers, and advocates for professional compensation without either negotiating or getting involved in political issues.

Many observers have speculated that the Legislature honed in on this issue because of the teachers unions’ political activity, often against positions that Republican leaders hold dear.

"If you look around the country, Georgia and other states, collective bargaining is not a panacea," Boyd said, noting the model creates adversarial relationships. "I would say not to panic. There’s other models in other states that can generate better salaries and better benefits."

But current union leaders are pointing to other states as reasons to panic.

Wisconsin’s law, adopted in 2011, led to a 40 percent decrease in union membership, according to the Wisconsin State Journal. But some organizations continue to seek certification, the paper reported in December, because of the policy issues they can continue to influence.

Florida unions that sit below the 50 percent participation rate are using such information as part of a marketing campaign aimed at attracting more dues-paying members.

"We are organizing around it," said Don Peace, United School Employees of Pasco president. "We are trying to illustrate the worth, the value of the contract, the language, the opportunity the union has to bargain. We want to make people aware what life would be like without someone advocating for them."

Without a bargaining agent in place, Peace said, employees would be on their own to deal with pay, benefits, workplace grievances and more. "It could be a dictatorship."

Many of the unions representing teachers are close to meeting the level needed to avoid the added bureaucracy. Raising perhaps greater concern is the status of the groups representing instructional aides, who in some counties are organized separately from teachers.

"They are absolutely essential to our neediest kids and our most medically fragile kids but they make a lot less money because they’re not a classroom teacher," said Hillsborough Classroom Teachers Association president Jean Clements. "So there’s a smaller percentage of them who feel like they can afford to actually join the union."

Meyer, the Tallahassee lawyer, said many questions remain about how employees will be counted for eligibility, and how the participation calculations will be made.

He anticipated that unions won’t disappear, but rather be distracted from their primary roles while annually demonstrating they deserve to continue operating. He also expected legal challenges to the law, focusing on the state’s right to work status.

Florida law and court precedent have made plain that the state can’t condition the right of an employee to collectively bargain — guaranteed in the state Constitution — on payment of a fee, Meyer said. By predicating the right to bargain on getting 50 percent of eligible employees to pay dues, he said, the Legislature set up a plan with constitutional flaws.

Lawmakers who favored the change said they simply wanted to ensure the unions represent the current group of teachers. If they say they stand for the majority, Sen. Dennis Baxley stated, they shouldn’t have trouble proving it.

But Sen. Lee, who voted against the measure, said the law did more than create a new system for unionization: It sent a demoralizing message to the people Floridians ask to teach their children 180 days a year.

Now, they’re looking for answers to the logistical questions so they can rally membership and move on to other business, such as negotiating a contract for 2018-19.