Reviving the Asylum Is Not the Answer to Gun Violence

In this era of law-and-order politics,...we do not need more incarceration. It does not make people safer, it tears communities apart, and many people, including incarcerated people themselves, have argued that incarceration actually produces mental illness. 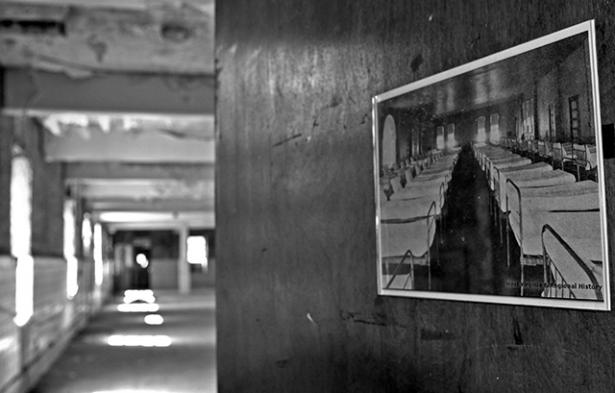 A view into a former group bedroom at the Trans-Allegheny Lunatic Asylum in Weston, West Virginia, on August 24, 2013. ,Eva Hambach/AFP/Getty Images

During a recent meeting to discuss gun safety and the school shooting in Parkland, Florida, Trump pined for the "old days," saying that back then, "We had mental institutions. We had a lot of them."

Speaking to members of his cabinet and governors from around the country, he continued, "You could nab somebody like [the Parkland shooter] because, you know, they did, they knew something was off.... But, you used to be able to bring them into a mental institution and hopefully he gets help or whatever. But he's off the streets."

This language was picked up by cultural commentators, some of whom agreed with him, as described in The New York Times's piece, "Trump Wants More Asylums -- and Some Psychiatrists Agree."

Trump's call for more asylums is inextricably intertwined with the devaluation of disabled and psychiatrized people and the fear-based, law-and-order politics that has been on the rise for decades.

Olga Khazan of The Atlantic, for instance, responded with an article entitled "Trump's Call for Mental Institutions Could Be Good," in which she argued that today, the country needs mental institutions because of its dearth of psychiatric beds, citing the University of Pennsylvania ethicist Dominic Sisti, who has called for a return to the "therapeutic" asylum model. At the end of her article, as an aside, Khazan writes that the only problem with Trump's call for more mental institutions is that it came as a solution to the problem of mass shootings. Only a small percentage of individuals with psychiatric disabilities display violence, she says, and institutionalization would not stop gun violence.

What such commentators and much of the public fail to realize is that Trump's call for more asylums is inextricably intertwined with the devaluation of disabled and psychiatrized people and the fear-based, law-and-order politics that has been on the rise for decades. Among disability activists and scholars, this oppression is known as ableism. Within the mad people's movement, it is commonly referred to as sanism. It is this oppression of psychiatrized people that undergirds the current call for their incarceration in asylums. In this era of law-and-order politics, custodial mental institutions are viewed as legitimate and appropriate rather than as a form of state-sponsored violence.

That vision directly contradicts the historical record. At the height of institutionalization in the mid-1950s, about 560,000 Americans idled their days away in deplorable, dirty and overcrowded institutions. Many people suffered through unnecessary, unproven and often brutal medical "treatments" to modify behaviors that were deemed abnormal. Since the 1960s, ex-patients, psychiatric survivors, some users of psychiatric services, and their allies have fought to gain their rights as citizens, restore their human dignity, and move themselves out of institutions into the community. They were aided along the way by legislation like the Community Mental Health Centers Act of 1963, which was designed to provide psychiatric services in the community, and by court cases such as Wyatt v. Stickney, which guaranteed certain rights for people in mental institutions. This is usually referred to as "deinstitutionalization."

Toward the end of the 20th century, the rise of neoliberalism and fiscal conservativism combined to make living in the community difficult for anyone seeking affordable and accessible housing, especially those individuals who were poor, unemployed, underemployed and/or people of color. Unjust socioeconomic policies resulted in widespread housing insecurity and contributed to the rise of mass incarceration and violence. Often, much of the blame for these consequences of socioeconomic policies is placed on deinstitutionalization and psychiatrized people. But describing deinstitutionalization as a complete failure ignores a whole generation of activism by institutionalized and psychiatrized people who fought for and won their freedom to live in the community, only to be called again into a life of segregation and ill-treatment. President Trump claimed that these institutions had been closed because of cost. That claim erases this important history.

The other piece of history that these commentators are ignoring is the history of law-and-order politics in the United States. Beginning in the 1960s, with President Johnson's War on Crime and then continuing through Presidents Nixon and Reagan's Wars on Drugs, the United States has built up a massive prison-industrial complex, which grew in response to (among many other factors) revolts, such as the 1971 Attica prison uprising, and has resulted in even more draconian race-based and race-baiting policies.

In the most dystopian, but realistic, of futures, people would be institutionalized to increase corporate profits.

As a result, today the United States has the highest rates of imprisonment in the world and people with psychiatric disabilities are disproportionately locked up. Our state already operates large-scale custodial mental institutions, which often take the form of privately managed jails and prisons.

At its core, the call for mental institutions today is an expansion of the carceral state. Proponents of the new mental institutions say that they would be well-monitored, well-funded, and well-regulated to ensure the safety and comfort of the people in them and the efficacy of the treatments deployed by institution staff. In an era of deep cuts to government spending on social welfare, these institutions would no doubt be private enterprises. We have seen the ways in which the privatization of the prison-industrial complex has contributed to the skyrocketing increase in the number of incarcerated people, and how privatized health care has contributed to the rampant proliferation of the pharmaceutical industry, especially in the area of psychoactive drugs, which some consider to be a form of chemical incarceration.

At best, the new institutions would be saturated with neglect and abuse. And in the most dystopian, but realistic, of futures, people would be institutionalized to increase corporate profits.

The United States is already a "leader" in locking up people. We do not need more incarceration. It does not make people safer, it tears communities apart, and many people, including incarcerated people themselves, have argued that incarceration actually produces mental illness.

Right after the Florida school shooting, President Trump said, "We must confront the issue of mental health." In that sense he is right, but not in the call to bring back psychiatric confinement. It is time to get "very tough" on the sale of firearms in the United States and on the high rates of incarceration, not on psychiatrized people or on expanding the carceral state.

Anne Parsons is an assistant professor of history at the University of North Carolina at Greensboro, where she serves as the director of public history. Her book From Asylum to Prison: Deinstitutionalization and the Rise of Mass Incarceration Since 1945 (UNC Press) will come out in Fall 2018.

Liat Ben-Moshe is an activist/scholar who has worked and published on such topics as deinstitutionalization and incarceration; prison abolition; disability, anti-capitalism and queerness; inclusive pedagogy; and disability in Israel/Palestine. Her book Politics of (En)Closure (forthcoming with University of Minnesota Press) examines the connections between prison abolition, disability and deinstitutionalization in the US. Dr. Ben-Moshe is also the co-editor (with Allison Carey and Chris Chapman) of Disability Incarcerated: Imprisonment and Disability in the United States and Canada (Palgrave 2014). She is an assistant professor of disability studies at the University of Toledo.

Michael Rembis is an associate professor in the Department of History and director of the Center for Disability Studies at the University at Buffalo (SUNY). He has written or edited many books and articles, including: Defining Deviance: Sex, Science, and Delinquent Girls, 1890-1960 (University of Illinois Press, 2011/2013); Disability Histories (University of Illinois Press, 2014) co-edited with Susan Burch; The Oxford Handbook of Disability History (Oxford University Press, 2018) co-edited with Catherine Kudlick and Kim Nielsen; and Disabling Domesticity (Palgrave Macmillan, 2016). He is currently working on a book entitled, "A Secret Worth Knowing": Living Mad Lives in the Shadow of the Asylum.