labor What Now for Unions?

Republicans on and off the bench are moving to kill unions. But millennials—the most pro-union generation since the 1930s—may yet find a way to organize. 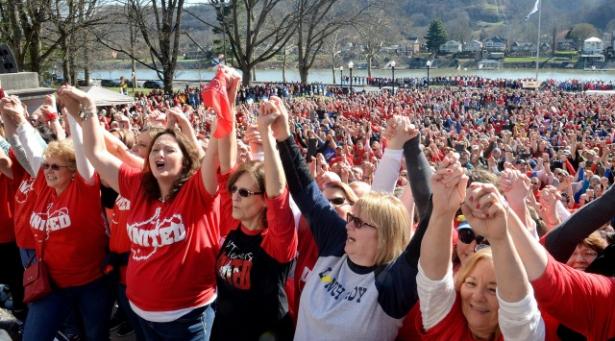 Striking teachers grasp hands during a rally at the West Virginia Capitol in Charleston. A model for labor in a post-Janus world?, Chris Dorst/Charleston Gazette-Mail via AP

For conservatives, the much-anticipated Supreme Court decision in theJanus v. AFSCME case may be coming eight years too late. If, as expected, the five Republican justices on the Court rule for the plaintiff, which would end public employee unions’ ability to collect dues from all the workers they represent, they will significantly weaken the nation’s largest unions, among them the two teachers unions, as well as AFSCME and SEIU. These are also among the most significant organizations in Democrats’ voter-mobilization programs and, more generally, in supporting progressive groups and causes. Even more fundamentally, the right plainly hopes such a ruling will also drive the final nail into the coffin of the American labor movement.

While a pro-Janus ruling could strengthen the Republicans electorally, when it comes to killing unions, the right is simply too late. The current configurations of the union movement may well shift, but the growing public support for labor suggests that in one form or another, worker organizations are not going away.

Eight years ago, in the trough of the Great Recession, the nation’s view of unions was a good deal more negative than it is today. For the first time since it had begun polling on the issue, the Gallup organization reported that support for unions had fallen below 50 percent. The United Auto Workers’ role in securing federal funds to bail out General Motors and Chrysler, and news reports that characterized UAW members as overpaid (which an inept UAW leadership did nothing to refute) contributed to a general decline in union support.

To many Americans, the movement was a dinosaur, a collection of cossetted workers in dying industries or on the public payroll, still collecting pensions while everyone else struggled to get by on 401(k)s or nothing at all.

That, however, was then. Today, both the Gallup and the Pew polls show public support for unions at its highest level in years: 61 percent at Gallup; 60 percent at Pew, a good 20 to 35 percentage points higher than the approval ratings of President Trump and the Republican Congress. Among Americans under 30, unions’ approval rating is a stratospheric 76 percent. As was the case in the 1930s, pro-union sentiment has grown only after the recovery was well under way.

At first glance, young people’s support for unions is puzzling: With union membership down to 10.7 percent of the workforce, and with many states having hardly any union presence, it’s a safe inference that most millennials have had no contact with a union at all. And yet, it’s young workers who are joining unions today, as the successful organizing drives among graduate students and the (disproportionately young) journalists at digital media outlets attest. According to the Center for Economic and Policy Research, more than three-quarters of new union members in 2017 were under 35.

Millennials’ support for unions, I’d argue, is of a piece with their 2016 support for the presidential campaign of Vermont Senator Bernie Sanders. Both are rooted in the economic adversities afflicting the young, including employment insecurity, student debt, unaffordable housing, and more. These struggles feed millennials’ apprehensions that the middle class they seek to join is further out of reach for them than it was for their parents and grandparents.

These occupational numbers are not necessarily good news for unions. Most likely, they reflect the fact that the only workers with the clout to organize are workers who cannot easily be fired for joining a union. It’s no accident that professional athletes and screen and television actors have some of the strongest unions; as is not the case with workers in fast-food outlets or on assembly lines, managers can’t sack professionals with the assurance that they can find a ready stream of plausible replacements.

This is one reason why West Virginia’s teachers won their strike: Even the Republicans who control that state’s government knew there was no way to easily replace them.

This is one reason why West Virginia’s teachers won their strike: Even the Republicans who control that state’s government knew there was no way to easily replace them. Conversely, this is also one reason why the efforts of the Service Employees International Union (SEIU) to organize fast-food workers, while yielding landmark minimum-wage hikes in many cities and states, have yet to increase the union’s ranks by a single member. The bosses at McDonald’s and their peers know that they can fire their pro-union employees and replace them with no great difficulty, and that any sanctions imposed on them under an enfeebled National Labor Relations Act are negligible. We have no basis for assuming that a young worker in a retail outlet is any less desirous of joining a union than, say, a young professor, but we know that management is emboldened to fire the former and constrained from firing the latter. That’s one reason why industrial unions like the UAW and the United Steelworkers have devoted resources to organizing—often successfully—at universities.

The growing share of union members who are both younger and professional is probably one reason why digital mobilization played such a key role in the West Virginia teachers strike, and is so crucial to similar labor actions in Oklahoma and elsewhere. Nearly all of West Virginia’s 20,000 teachers were signed on to a strike-participation Facebook page leading up to their walkout, and when the two teachers unions in the state struck a deal with the governor to end the strike in return for a promise of a 5 percent raise, it was the spontaneous Facebook-page resistance of teachers—some local union officials, some not—to going back to work before the deal was actually done that prevailed. Both the universal rank-and-file walkout and, then, the universal opposition to returning to work without a deal would have been impossible without Facebook.

Indeed, it’s clear that Facebook provides workers with a form of mobilization that both complements and eclipses unions’ own capacities. West Virginia has only 75,000 dues-paying members in all of its unions, and only a fraction of those are teachers—yet nearly every one of the state’s 20,000 teachers walked off their jobs. In Oklahoma, a state with a unionization rate of just 5.5 percent, and where all unions claim a bare 84,000 members, a Facebook page called “Oklahoma Teacher Walkout—The Time Is Now!,” started by one rank-and-file teacher, has 55,000 members and has been the key instrument for building support for a strike.

As University of North Carolina sociologist Zeynep Tufekci has argued in Twitter and Tear Gas: The Power and Fragility of Networked Protest, the world-shaking mobilizations in New York’s Zuccotti Park, Cairo’s Tahrir Square, and Istanbul’s Gezi Park—all of which she attended—were inconceivable without social media. However, she argues, since the crowds they generated had no organizational structure or capacity to reach decisions, they were incapable of winning concessions from the powers they had assembled to oppose. In that sense, the West Virginia teachers strike occurred within what we might term the Tufekci Sweet Spot: It relied on social media to mobilize mass support, and had just enough decision-making structure provided by the teachers unions (and directed by bottom-up sentiment made clear through Facebook) to strike a deal with the state.

What, then, will the future of workers’ movements look like in a time of growing pro-union sentiment, mounting millennial militancy, enhanced mobilization capacity, and the increasing impediments to union strength likely to be decreed by the Supreme Court? The immediate, and intended, effect of a pro-Janus, anti-union ruling will be to diminish and divert union resources, thereby constraining Democrats’ electoral capacities (though the anti-Trump surge may compensate for that). In the non-electoral sphere, West Virginia may provide us with something of a template, if chiefly for professional workers. Teachers, not just in Oklahoma but in a range of states, are considering striking for higher pay and benefits. Even where union membership isn’t strong, they clearly have the capacity to mobilize, and the material motivation as well: On average, teachers are making more than $3,000 less today than they made in 2009, while their family health insurance costs $1,400 more than it did a decade ago.

As with teachers, so with a rising number of other professional and technical workers whom management can’t readily replace—even if, as in West Virginia, the workers’ actions take place outside the legal framework of collective bargaining. Indeed, if the Court rules for Janus, which would diminish the number of union members, we may be in for a spate of professional-worker job actions among both members and non-members, in which unions (or, for a preponderantly non-union workforce, pop-up unions) chiefly help frame demands and negotiate the contract—serving less as the mobilizer and more as the closer.

For most American workers, however, the legal impediments to unionizing, already formidable, will grow even more so in a post-Janus world. Should the Democrats recapture the federal government after the 2020 elections, they will need to do something that no Democratic Congress has mustered the will to do in the last 70 years: Change labor law to bolster workers’ right to organize—and, if the Democrats can figure out how to do so, do the same for workers who are independent contractors and temps.

They will have strong public backing to make such changes. The anti-plutocratic, pro-democratic politics of the young in particular apply not just to the polity, but to the workplace as well.

This article appears in the spring 2018 edition of "The American Prospect."