Judge Drops Charges Against 13 Who Argued Pipeline Civil Disobedience Action Was "Necessary" to Save Planet. "We are part of the movement that's standing up and saying, 'We won't let this go by on our watch.'" 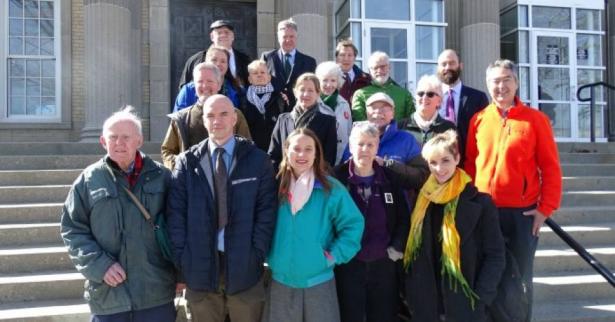 Defendants and legal team pose for a photo after their March 27, 2018 trail on the steps of the West Roxbury, Mass. courthouse., Peter Bowden/flickr/cc

Climate activists are cheering after a district judge in Boston on Tuesday ruled that 13 fossil fuel pipeline protesters were not responsible for any infraction because of the necessity of their actions.

Bill McKibben, who was slated to be an expert witness in their case, tweeted a celebratory "Good golly!' in response to the ruling, adding, "This may be a first in America. "

Good golly! A few minutes ago a Boston judge acquitted 13 pipeline protesters on the grounds that the climate crisis made it necessary for them to commit civil disobedience. This may be a first in America. Details to follow, and go to @ClimateDisobey for some live video

The charges the defendants faced stemmed from actions they took in 2016 to block Spectra Energy's fracked gas West Roxbury Lateral Pipeline. While they had spent a year and a half preparing a climate necessity defense to present to a jury trail, prosecutors prevented that from happening last week when they reduced the criminal charges to civil infractions. "By reducing the charges," the Climate Disobedience Center argues, "the prosecutor has avoided what could have been a groundbreaking legal case."

Judge Mary Ann Driscoll, did, however, allow each of the defendants to explain to the court why they were motivated to take part in their actions to stop the Massachusetts pipeline. After that, according to a lawyer for the defendants, she said they were not responsible by reason of necessity.

Our team is gathering at the West Roxbury District courthouse! The #climatetrial we hoped for has been canceled, but our fight goes on! Read more & follow along at https://t.co/IqNIBqAlbx pic.twitter.com/WUO5cUVZhg

We were in West Roxbury Court today for #climatetrial. The criminal charges were reduced to civil infractions, then after testimony the activists were all found not responsible by reason of necessity. pic.twitter.com/5cq4joKlHb

Speaking on the steps outside the courthouse following the verdict, defendant and noted climate activist Tim DeChristopher said they "asked the judge to recognize that that evidence was out there—that's it clear across our society the severity of climate change, the degree to which the government response has been a failure, and the degree to which regular folks like us have a necessity to act to prevent this harm."

"Hopefully, next time around we'll be able to do that with a jury, and we'll keep fighting," he said.

Defendant Callista Womick spoke outside the courthouse as well, saying that "it's hubristic to think we can keep poisoning the planet and keep living on it." As such, she said she took part in the protest because she saw it as "part of my duty to my fellow human beings and fellow life forms."

According to defendant Karenna Gore, director of the Center for Earth Ethics at Union Theological Seminary (and daughter of former Vice President Al Gore), what happened in the courtroom was "really important," though she noted "the irony" of being found not responsible for the infractions because "we are making ourselves responsible."

"We are part of the movement that's standing up and saying, 'We won't let this go by on our watch. We won't act like nothing's wrong,'" she said. "We're going to be speaking up in new ways," she added.

"We're going to be demanding that the people who are in elected office, and also the corporations who are putting their costs, the cost of their doing business, for their own profits... on the public, they're putting that cost on future generations. And we are taking responsibility to say 'no' to that."