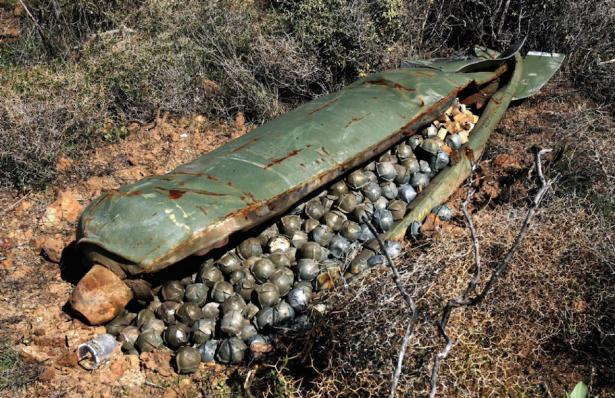 Shading my eyes from the bright sun, I stared into the bomb crater amid the verdant rice paddies. While it had been nearly 50 years since the last American planes riddled the countryside near Danang in central Vietnam, craters still pockmark the land. Some of the deep depressions remain dry while others, a testament to the ingenuity of the villagers, serve as watering holes for the oxen that farmers harness to till their fields.

It was my first week in Vietnam, where I would spend the summer of 2016 conducting research. I was studying the efficacy of international law, namely whether legal remedies exist for civilian victims of unexploded ordnance and chemical weapons from the Vietnam War. I had arrived well versed in the numbers: America dropped three times more ordnance over Vietnam, Laos and Cambodia than all sides did during World War II. Estimates are that at least 350,000 tons of live bombs and mines remain in Vietnam, and that it will take 300 years to clear them from the Vietnamese landscape at the current rate.

Bombs and other ordnance were dropped on thousands of villages and hamlets. The most common were cluster bombs, each of which contained hundreds of baseball-size bomblets; the bombs are designed to explode near ground level, releasing metal fragments to maim and kill. But many of the cluster bombs failed to release their contents or, in other cases, their bomblets failed to detonate.

For the Vietnamese, the war continues. Loss of arms, legs and eyesight are for the more fortunate ones. Others have lost their family breadwinners, or their children. Children find baseball-size metal objects and unwittingly toss the “toys” to one another in games of catch until they explode. Nearly 40,000 Vietnamese have been killed since the end of the war in 1975, and 67,000 maimed, by land mines, cluster bombs and other ordnance.

That’s not the only, or even the worst, legacy of the war that Vietnamese families still face. Seeking to defoliate entire forests to expose enemy forces to spotter planes, the Americans dropped 18 million gallons of chemical herbicide over South Vietnam from 1962 to 1972. There were several defoliants used, but the best known was Agent Orange. In 20,000 spraying missions, planes drenched the countryside and an estimated 3,181 villages.

While entire forests dried up and died typically within weeks of spraying, it would be years before scientists established that one of the active ingredients in the defoliants, a group of compounds called dioxin, is one of the deadliest substances known to humankind. Just 85 grams of dioxin, if evenly distributed, could wipe out a city of eight million people. But illnesses and deaths from Agent Orange exposure were only the initial outcomes. Dioxin affects not only people exposed to it, but also their children, altering DNA. Large numbers of Vietnamese babies continue to be born with grotesque deformities: misshapen heads, bulging tumors, underdeveloped brains and nonfunctioning limbs.

The deadly defoliants also rained down on American troops. Researchers led by Jeanne Stellman of Columbia examined military records of the flight paths of Agent Orange spraying missions. Comparing those flight paths to the position of nearby villages and American ground troops revealed a direct association between exposure and later health problems.

These findings, published in 2003, put an end to the longtime denial by the government that Agent Orange spraying did not harm American troops. The Department of Veterans Affairs now assumes, as a blanket policy, that all of the 2.8 million troops who served in Vietnam were exposed to chemical defoliants, and provides some medical coverage and compensation for that. But the United States has never acknowledged that it also poisoned millions of Vietnamese civilians in the same way.

American combat deployments ended in 1973 and all American personnel were removed from Vietnam by 1975, but the explosive ordnance and dangerous chemicals remained. Polluted soil and waterways were left untouched. Innocent children and families would serve as human guinea pigs to test the long-term results of exposure.

The indiscriminate use of ordnance and chemical weapons against civilian populations is prohibited under international law, dating back to the Hague and Geneva Conventions of the late 19th and early 20th centuries. But for more than a decade, the United States acted in direct contravention of those agreements, which it had pledged to uphold. Since that time, numerous additional international treaties and conventions have come into force that not only prohibit the types of weapons used by the United States in Vietnam, but also require their cleanup after hostilities cease.

The United States, however, has done very little to fulfill such obligations, leaving it largely to the Vietnamese to suffer the results and to clean up what they can nearly 50 years later. Some have suggested that because much of the relevant international law requiring cleanup came into effect after the United States left Vietnam, the country is absolved of such obligations. But this assertion hangs on a thin thread, as the unexploded ordnance and defoliants still injure and kill people today. American responsibility for cleanup is therefore applicable under international law, not something to be dismissed with a historical wink.

My father’s generation served in Vietnam, but the war’s continuing impact is no longer theirs alone to bear. The United States used weapons against civilians contrary to widely accepted international standards, and has skirted its responsibilities to clean up what was left behind. Working to enforce international law, and to assist the Vietnamese in addressing the deadly mess that remains, is a burden now resting on the shoulders of a new generation of Americans.