Trump Is Erasing Racial Diversity from the South's Federal Courts

Trump's regression on judicial diversity could take decades to reverse. This is especially true in the fast-changing South, where federal courts have historically played a critical role in protecting civil rights. 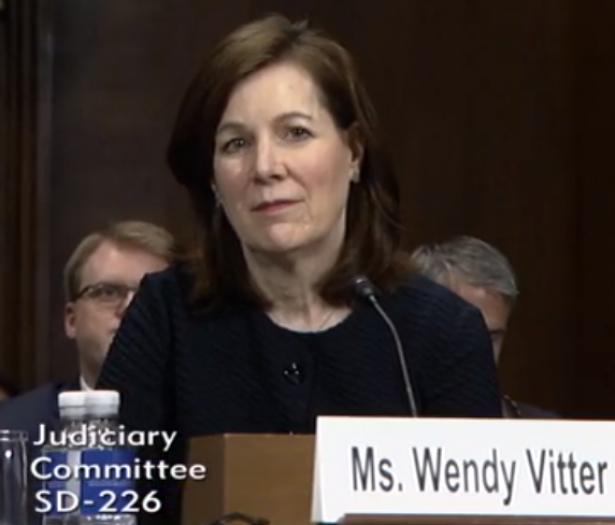 Trump nominee Wendy Vitter, wife of former U.S. Sen. David Vitter takes questions during a confirmation hearing on April 11. Senators asked Vitter about her anti-abortion activism and refusal to state that Brown v. Board of Education was correctly decided, Image is a still from the Senate Judiciary Committee's live stream.

This week the White House announced 19 new judicial nominees, and — like President Trump's previous nominees — the overwhelming majority are white. Of the over 100 attorneys he's nominated to federal judgeships to date, around 92 percent are white, with only a handful of African Americans and Latinos. Trump's record on judicial diversity is the worstsince President Reagan.

Trump's regression on judicial diversity could take decades to reverse. He is nominating judges at a much faster pacethan President Obama, and — despite the glaring lack of diversity — the Senate is rapidly confirming them to seats it refused to fill in 2016 and 2017. Trump's nominees are also relatively young, which means these white judges will preside over an increasingly diverse population for decades to come.

This is especially true in the fast-changing South, where federal courts have historically played a critical role in protecting civil rights. While Republican senators in North Carolina and other Southern states blocked some of Obama's non-white judicial nominees, they have supported Trump's white nominees, including a North Carolina lawyer with ties to white supremacists. In Tennessee, Obama's black nominee was blocked by Senate leaders and then replaced with a white Trump pick.

Until this week, Trump had put forth only one African-American and one Latino judicial nominee. The latest announcement brought the number of his Latino nominees to three — still far lower than the 10 percent of judicial picks who were Latino under the last Republican president, George W. Bush.

All three of Trump's pending nominees to the 5th U.S. Circuit Court of Appeals are white, including one to replace the court's only Latino judge. The 5th Circuit rules on cases out of Louisiana, Mississippi, and Texas, a region in which white people constitute a minority of the population.

Chris Kang, a former adviser to President Obama on judicial nominations, told Facing South that the impact of Trump's nominations to federal courts in the South will reverberate for decades. "The South is the most rapidly changing region in the nation and deserves courts that reflect the diversity of its present and future — not its past," he said.

Civil rights and judicial diversity in the South

When the Supreme Court decided Brown v. Board of Education, much of the responsibility for implementing the landmark decision against racially segregated public schools fell to the 5th  Circuit, which at the time included six of the 11 former Confederate states. (In 1981, the circuit was divided in two, with the new 11th Circuit hearing appeals from Alabama, Georgia, and Florida.)

A group of four Republican judges on the court at the time played a key role in getting those states to eventually comply with Brown and other anti-segregation decisions, according to author Jack Bass. However, the Fifth Circuit has since taken a hard turn to the right.

"President Richard Nixon began appointing conservatives to the bench as part of the Republican ‘Southern strategy' in the 1960s of appealing to whites by slowing racial integration," Bass wrote in The Nation.

In 1961, President Kennedy appointed the first non-white federal judge in the South, Reynaldo Garza of Texas, who was later promoted to the 5th Circuit by President Carter. The first black federal judges in the South were appointedby Carter, though his diversification of the federal courts was partly reversed during Reagan's tenure.

An article in the Berkeley La Raza Law Journal noted that President Clinton made great strides in diversifying the courts, and President George W. Bush's nominees were nearly as diverse. President Obama shattered records for judicial diversity, appointing well over 100 people of color to the federal courts, though some of his nominees were blocked by Southern senators.

Judge Abdul Kallon was nominated by President Obama to become the first black judge from Alabama on the 11th Circuit in February 2016, but Sens. Richard Shelby and Jeff Sessions blocked his nomination. Trump instead nominated Kevin Newsom, a conservative white jurist, to the seat last May.

On the same day, Trump offered a black nominee to serve on the Middle District of Alabama — but he later transferred the nomination to the Southern District. This required the administration's only black nominee, Judge Terry Moorer, to move out of the district that included the state capital and thus would be more likely to hear redistricting cases or those involving political corruption.

Trump then nominated a young, inexperienced lawyer named Brett Talley to the Middle District slot. Talley withdrew after questions about his qualifications and failure to disclose statements posted on the Internet that, among other things, defended an early Ku Klux Klan leader. 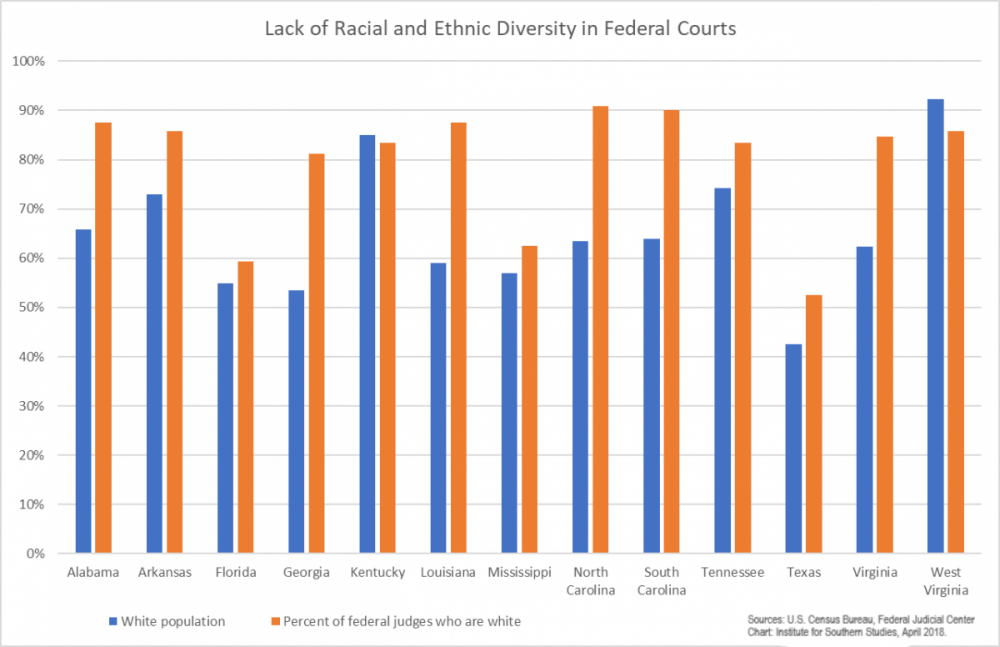 White supremacy on the bench?

The Eastern District of North Carolina is home to a quarter of the state's black population, but it has never had a black federal judge. Longtime U.S. Sen. Jesse Helms, a staunch opponent of civil rights legislation whose campaigns relied on thinly veiled racist appeals, had allegedly blocked previous attempts to nominate black judges in North Carolina. In the late 1990s, Helms also blockedthe nomination of Judge James Wynn, a black justice on the state Supreme Court, to the 4th U.S. Circuit Court of Appeals in Virginia. President Obama re-nominated Wynn years after Helms left the Senate, and he was confirmed.

Near the end of his tenure, President George W. Bush nominated Thomas Farr, a Republican lawyer with close ties to Helms, to an empty seat on the Eastern District. Farr's nomination stalled, and President Obama then put forth two different nominees — both black women, one of whom was recommended by Sen. Richard Burr. The Senate refused to move forward on either nominee, leaving the seat vacant for a decade.

Trump re-nominated Farr last year, but his nomination has been slowed by concerns about his ties to white supremacy. Farr's long-time law partner, Tom Ellis, was formerly affiliated with the racist Pioneer Fund, which argued that white people were genetically superior. Farr honored Ellis in a 2007 speech. Farr has also came under fire for his role in a voter intimidation scheme while a lawyer for Helms' 1992 1990 campaign, with senators demanding to know whether he concealed his involvement.

Farr was also involved in the North Carolina legislature's drafting of its discriminatory 2013 voting law, which instituted a voter ID requirement and other rules to make it harder to vote. Farr helped legislators sort through data showing which types of identifications were possessed by black voters; legislators then excluded those forms of identification from the voter ID law.

This action, along with the drafting of other provisions of the law, led the 4th Circuit to rule the law unconstitutional. The opinion from a three-judge panel that included Judge Wynn said the legislature had targeted black voters "with almost surgical precision."

Not only whiter but more extreme

Trump has nominated a white lawyer to replace the sole Latino judge on the 5th Circuit, though he recently announced a few Latino nominees to judgeships in Texas. Latinos, who account for 39 percent of Texas' population, are also drastically underrepresented in the state legislature. By the end of Trump's first term, a majority of Texas' voting eligible population will bepeople of color, but the federal courts that preside over the state could be less ethnically diverse.

The same could be true for the other states in the 5th Circuit, Louisiana and Mississippi. People of color already constitute a majority of the circuit's population, but — like the 11th Circuit — the court has had few judges of color. That's something Trump and the Senate seem unlikely to change.

Trump's nominations would not only make the 5th and 11th Circuits less diverse but also more ideologically extreme. For example, Trump's white nominees from Texas have included judges with radical ideologies and lawyers with a history of fighting against equal rights for LGBT people and women. Trump's 5th Circuit nominees faced questions about statements denying the existence of a gender pay gap and rulings against women alleging sexual harassment. Texas nominee Jeff Mateer withdrew after failing to disclose speeches and interviews in which he denigrated LGBT people and described transgender children as part of "Satan's plan."

The 5th Circuit is already the most conservative circuit court in the country, and Trump is pushing it further to the right. Meanwhile, several of his nominees embrace a philosophy of giving judges a greater role in reviewing and overturning government actions.

The implications of this trend will be felt across the country. Even before Trump, the 5th Circuit had a record of blocking important federal regulations. Near the end of President Obama's tenure, for example, the 5th Circuit upheld orders from Texas judges that imposed nationwide injunctions on the DACA program and new rules on overtime pay.

Billy Corriher is a senior researcher with Facing South who specializes in judicial selection, voting rights, and the courts in North Carolina.

Facing South, the online magazine of the Institute for Southern Studies, is an essential resource for activists, policy makers, scholars and others working for lasting change in the South. Your support today helps us break important stories about the South and shine a light on injustices in this critical region.

You can also invest in the future of Southern, independent journalism by becoming a Sustainer today.