To Bring Drug Prices Down, Trump Proposes -- Nothing, Really

Eschewing policies to lower costs here, the president tells drug companies to raise their prices abroad. (We’re not making this up.) 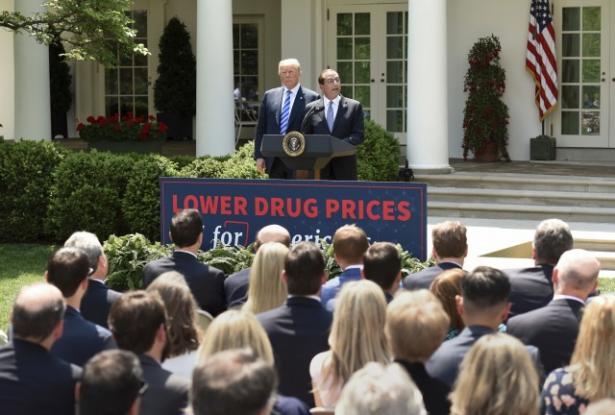 Secretary of Health and Human Services Alex Azar, a former Eli Lilly executive, speaks about lowering drug prices as President Trump looks on during an event in the Rose Garden on May 11, 2018., credit: Olivier Douliery/Sipa USA via AP Images // The American Prospect

In 1974, President Gerald Ford announced a plan to alleviate rising consumer prices. “We must whip inflation right now,” Ford proclaimed, holding up a button with the acronym WIN. Ford had no concrete policies to convey, no government price controls or monetary proposals. But he did have the buttons, along with a few recommendations for people to plant vegetable gardens or carpool to save money.

The Whip Inflation Now campaign was one of the biggest public relations failuresin American history, a slogan in search of an idea. And I couldn’t help but recall WIN when watching President Trump in the Rose Garden on Friday, in front of a sign reading “Lower Drug Prices for Americans.” There were no buttons, but the message was just as empty: a plan to lower drug prices based mostly on mouthing the words “we will lower drug prices.” It’s no wonder drug company stocks climbed higher even while Trump was talking.

The fact that this speech was given in May 2018, 16 months into Trump’s term, while prices for the best-selling drugs in America have increased relentlessly over the past year, reveals the utter haplessness of the effort. Whatever substance existed in Trump’s proposals carefully avoided inflicting any pain on drug company profits.

Amazingly, the centerpiece of Trump’s blueprint for getting tough on an industry he described as “getting away with murder” during the campaign was a demand that it earn higher profits on overseas sales. “When foreign governments extort unreasonably low prices from U.S. drug makers, Americans have to pay more to subsidize the enormous cost of research and development,” Trump said. What Trump calls extortion is actually the natural occurrence in countries directly purchasing prescription drugs in bulk—what some would call a single-payer—and demanding better terms on the price.

Many have focused on Trump’s reversal of campaign promises favoring direct drug price negotiation through Medicare. But that would have always required agreement from a skeptical Republican Congress. The bigger betrayal is how the Trump administration rejected numerous steps it could take without Congress’s approval to reverse trends of soaring drug prices.

For example, the U.S. government foots the bill for a significant amount of pharmaceutical R&D, both directly through the National Institutes of Health (which represents about one-quarter of all drug research spending), and indirectly through tax credits (slimming the industry’s overall tax burden). Despite that, the government issues exclusive patents on medications, shielding manufacturers from competition for years on drugs the government helped them develop.

The Bayh-Dole Act of 1980 mandates that any drug benefiting from federally funded research and development (which would include every drug approved in the United States between 2010 and 2016) must be made available on “reasonable terms.” If not, the government has the authority to license the product to other drug companies to make it more accessible. The feds have never forced the re-licensing of any medication, but even the threat could bring pharmaceutical prices in line.

There was no mention of Bayh-Dole in Trump’s speech or the White House’s associated blueprint for lowering drug prices, however. Instead, there are a series of hints and half-measures and technical changes that fail to reverse the core dynamic of drug pricing: that drug companies can charge whatever they want for medications in the United States.

That’s not to say some ideas Trump broached won’t help, particularly those that attack industries other than drug makers. For example, pharmacy benefit managers, the middlemen between drug manufacturers and pharmacies and health plans, extract excess profits from all parts of the supply chain. Trump’s proposal endorses more price and rebate disclosure for insurers, taking an information advantage away from PBMs. It prohibits Medicare Part D contracts from putting pharmacists under “gag orders” that prevent them from telling patients about cheaper out-of-pocket options. And it explores requiring PBMs to act in patients’ best interest, similar to legislation in California. This could limit PBMs from hording price rebates meant for patients’ wallets.

None of these measures, of course, would impact drug company profits. Similarly, a proposal on so-called 340B payments for drug treatments to the indigent mostly scolds hospitals for pocketing the rebates, while the administration recently quietly cut the amount drug companies themselves have to pay to help fund the program.

In short, Trump’s proposals blame everybody but drug companies for high drug prices.

Much of Trump’s plan is vague. He would “take steps” to end patent gaming, without mentioning what those steps are. He would “streamline” the drug approval process, which his Food and Drug Administration is already doing, with little impact on the trajectory of prices: Faster approvals boost corporate profits rather than hamper them. Trump would give Medicare “more negotiation power” with drug companies, another non-specific term that falls short of direct negotiations.

A few interesting proposals amount largely to conversation starters. Requiring prices in drug company advertising is a nice idea, but the patient doesn’t pay the full freight so it’s unclear whether they would care. Capping out-of-pocket expenses just shifts the burden from patients to taxpayers, without cutting into industry profits. Creating incentives in Medicare Part D for companies that keep prices low sounds good, but the specifics are missing. Many other tweaks offered up for Medicare patients don’t reach the hundreds of millions of Americans not subscribed in that program.

The men charged with implementing these policies come from the pharmaceutical industry. Health and Human Services secretary Alex Azar is a former executive with Eli Lilly. His top deputy worked for Pfizer. The FDA commissioner consulted for top drug companies. The main health policy specialist at the Office of Management and Budget, overseer of budget-related proposals on drug prices, is Joseph Grogan, who lobbied for Gilead Science, progenitors of perhaps the most shameless price-gouging scandal in recent memory: hepatitis drug Sovaldi.

If you want to really take on the drug industry, there are paths forward that don’t require congressional approval. The FDA could allow temporary importation in concentrated markets of generic drugs approved abroad. It could accelerate generics to prevent critical shortages, as is happening now with the EpiPen. Patent abuse—which takes such forms as drug patent-holders paying off generic companies in secret settlements to keep competition off the market, denying generic makers samples of drugs they want to copy, or using tribal sovereigntyto protect exclusivity—could be prosecuted under the Hatch-Waxman Act. And as noted above, under Bayh-Dole the government could re-license patents for drugs developed using federal funding.

Then there’s one big idea that would require congressional action—ending the patent monopoly racket altogether by publicly financing pharmaceutical research entirely, saving hundreds of billions of dollars a year in costs (including for the government, whose increased research spending would be more than offset by lower drug prices in government programs).

A committed president could side with millions of people struggling to pay for medications, not with drug company executives.

These are real solutions, not a slogan suitable for a button. The next Democratic president will have to think about which ones to embrace. The Democrats’ Better Deal proposal on drug prices includes Medicare price negotiation, but none of these more radical ideas that would stop the price shocks that Americans routinely experience. A committed president could side with millions of people struggling to pay for medications, not with drug company executives.

And this president? He’s been the best friend the drug companies ever had. The industry got a giant windfall in the tax bill, which they’ve spent on shareholdersrather than helping patients. Now they’ve been rewarded for the $363 million they’ve spent on lobbying since the inauguration with a proposal that leaves their massive profits untouched. Maybe Novartis blew $1.2 million on Michael Cohen, but judging from this toothless speech, the rest of the drug industry’s money was well spent.

[David Dayen is a contributing writer to Salon.com who also writes for The Intercept, The New Republic, and The Fiscal Times. His first book, Chain of Title, about three ordinary Americans who uncover Wall Street's foreclosure fraud, was released by The New Press on May 17, 2016.]