Working Families Party at a Crossroads

New York’s sort-of-third party has won some big victories in the past two decades but its future is uncertain after defying Andrew Cuomo and his labor allies to endorse Cynthia Nixon. This Saturday - May 19 - the Working Families State Convention is in Harlem. 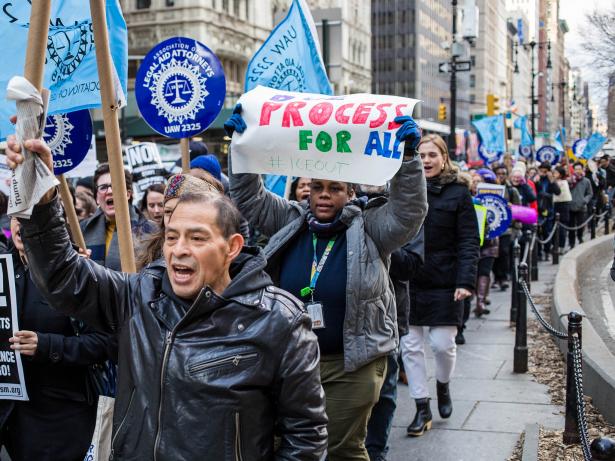 Members of the Working Families Party together with the Association of Legal Aid Attorneys (UAW 2325) call for the removal of immigration officers from New York courts, March 15., Credit: Iryna Yafimchyk/Working Families // The Indypendent

In 1998, when George Pataki was governor, Rudy Giuliani was mayor and the New York minimum wage was $4.25 an hour, some people with politics not far from the Democratic Socialist of America’s (DSA’s) had an idea that was way smarter than anything we in DSA have come up with so far. They figured that if you could combine grassroots energy with labor movement money and personnel and exploit some idiosyncrasies of New York ballot law, you could build a permanent, self-sustaining progressive electoral operation that could coordinate an independent labor movement’s political strategy, institutionalize skills and experience, build political careers from the ground up and win dramatic reforms.

This strategy paid off massively; it was by far the most successful thing the left did in New York in my lifetime because it won things like massive wage increases and free childcare and guaranteed parental leave for working-class New Yorkers. Very, very few left projects in the United States since 1970 can point to anything like that scale of accomplishment.

The difference between us and the people who founded WFP is that they found an organizing model that worked and changed the world — we haven’t yet.

The contradiction inherent in that strategy had to do with the politics of the labor movement in our era. You absolutely couldn’t do it without the unions because organized labor is the essential working-class institution, the only possible source of funding on the scale and stability required to build this sort of thing. But doing this with the labor movement posed its own risks. For structural reasons, most unions are always going to be enormously vulnerable to pressure from politicians. Depending on union money and holding a labor coalition together always risked the party’s political independence. But again, you can’t run this kind of thing out of your basement — not sustainably, not for the long haul. Without union funding, there was no way at all.

Ironically, as the power and confidence of the Working Families Party (WFP) increased, so did the problem.  The stronger the party and the stronger the progressive left it represented became, the greater the incentive for powerful Democrats to take it down. The fix was probably already in when their preferred candidate took the New York City mayor’s post in 2013. When the party’s grassroots tried to avoid an Andrew Cuomo gubernatorial endorsement in 2014, powerful Democrats — Cuomo above all — began to move in for the kill.

I suspect that the people running WFP saw the threat very clearly. Hence the decision to take the model national, expand as quickly as possible and avoid being vulnerable to the politics of New York.

By 2018, the dilemma was obvious in New York. Endorse Cuomo and discredit the project, or refuse and lose the unions. Break right or break left. The party broke left and now we’re in a new era, navigating new terrain. Perhaps the national expansion will save the party or perhaps the newly confident and aggressive grassroots will be enough to sustain it.

But in any case, it’s a new strategy now. And it’s a scary moment for everyone fighting for the working class in New York. We in DSA may have disagreed with WFP at times, we may have sometimes found it disappointing, but WFP as it was made everything easier, and it’s not so clear what happens now.

Ever since I started engaging in New York politics, whenever WFP came up some leftist would sneer at it. Not a real party, barely independent of the Democrats, they endorsed Cuomo the fools! I always found that ridiculous. The difference between us and the people who founded WFP isn’t that we’re so genius we see that it would be nice to have an independent third party and they don’t, or that we’re so savvy we saw that Cuomo was a bad man in 2014. It doesn’t take a genius to see that. The difference between us and the people who founded WFP is that they found an organizing model that worked and changed the world, and we haven’t yet. Having good positions is easy, getting power so they matter is hard.

It’s absolutely not a matter of repeating WFP’s pre-2018 strategy. What worked in 1998 won’t work now because the world has changed. They’re moving on to a new thing and so is DSA. But for those of us on the left who are hungry for power, who want to win fights, write laws and change the world, the WFP’s pre-2018 strategy, contradictions and all, is a model we have a lot to learn from. The lives of working-class New Yorkers are better because they figured out a way to build sustainable power and win.

[Michael Kinnucan is a writer and activist in Brooklyn. He is on the organizing committee of DSA’s Brooklyn Electoral Working Group.]

This is reader-supported news. Make a contribution today.