The Midwest Is Getting Drenched, And It’s Causing Big Problems 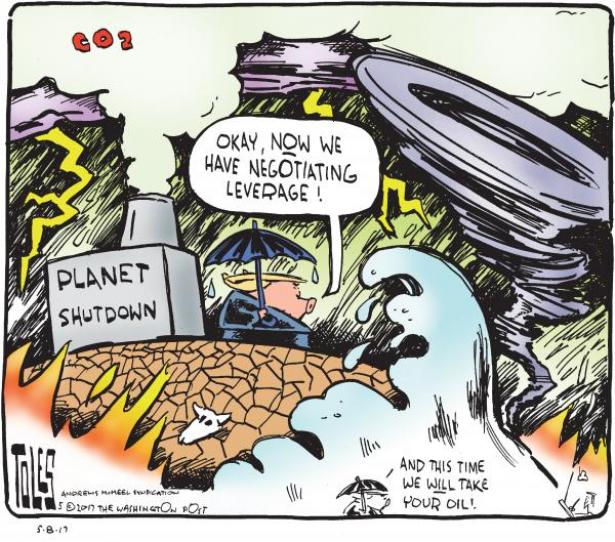 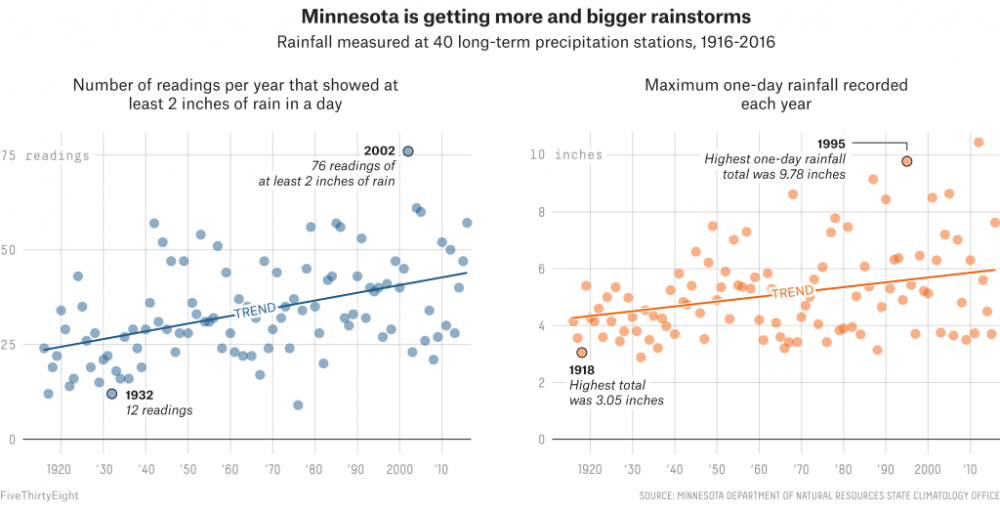 Minnesota is getting wetter. Over the last 100 years, the state has seen more storms that produce heavy rainfall, and its strongest storms have grown more intense. One of the more dramatic changes is the increasing number of “mega-rain” events — rainstorms during which at least 6 inches of rain falls over at least 1,000 square miles and the center of the storm drops more than 8 inches of rain. Minnesota has had 11 mega-rains since 1973,1 and eight of them have come since 2000. Two mega-rains swept through in 2016, which is only the third time the state experienced more than one mega-rain in a year. (It also happened in 1975 and 2002.)

Experts suspect climate change is behind this and other shifts in precipitation patterns. But knowing what’s causing an increase in precipitation and knowing what to do about it are two different issues. Minnesota and states across the Midwest are confronting an uncertain, flood-prone future, one where changes in precipitation patterns could get even more dramatic. The precipitation estimates that city planners have relied on in making preparations for flooding are based on historical weather trends, not predictions of future trends, and the estimates themselves were sometimes decades old. New estimates have been released for Minnesota, but they only show how much has already changed. They have nothing to say about what change is coming next.

Minnesota is not alone in its recent wetness. Though the Midwest is far from any hurricane-prone coasts, the region has seen an increase in both precipitation and, subsequently, flooding. “It’s a huge amount of water being added,” said Kenny Blumenfeld, a senior climatologist in the Minnesota Department of Natural Resources State Climatology Office, “and a huge water-management problem.” This added water can be seen in the map below, which shows the nationwide changes in annual peak streamflows — that is, the highest yearly reading2 of how much water flowed past a gauge monitored by the U.S. Geological Survey.3 In the Upper Mississippi Valley, the peak ratings at nearly all the gauges show more water flowing through over the last century. 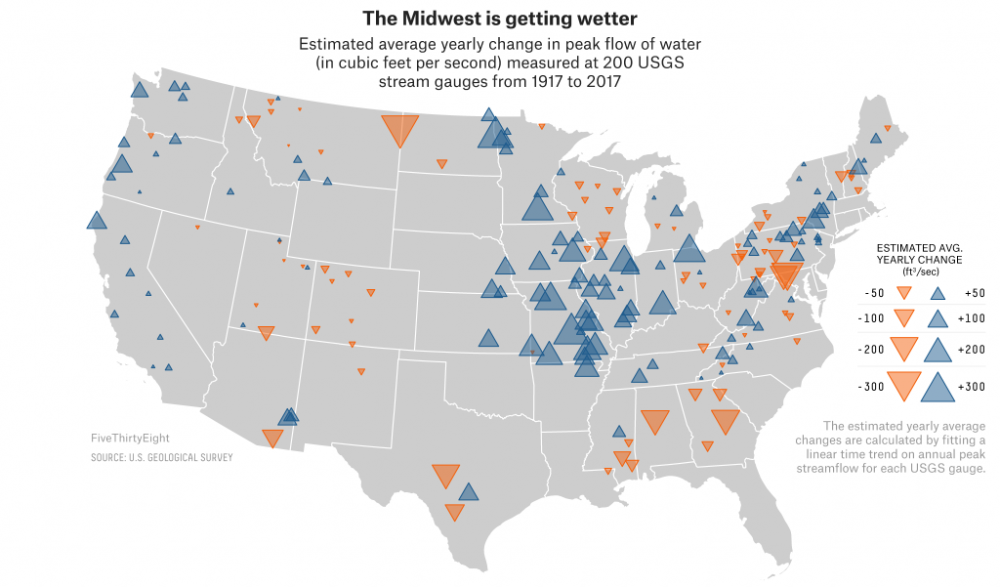 All this rain doesn’t just mean bigger floods, it also means more unpredictable floods. According to Eric Waage, the director of emergency management in Hennepin County, Minnesota, flooding in the state used to come primarily in early spring, when snow from the preceding winter melts and rivers rise. This kind of flooding from snowmelt can be dramatic, but the time between when the precipitation falls as snow and when it melts and pours into rivers as water allows for some advance planning (more snow in the winter means more water later). Recently, however, the state has had to worry more about flash flooding because intense rainstorms can arise with little or no warning. “It’s getting weird,” said Waage.

During one 2016 storm that resulted in parts of Minnesota qualifying for federal disaster assistance, concentrated storm bands over populated areas dropped nearly 10 inches of rain in just a few hours. Even away from any creeks or rivers, water coursed through neighborhoods and into basements. Flash flooding like this “can catch you off guard,” Waage said, making it harder to warn people or make preparations.4

Municipalities try to prepare for emergencies like these ahead of time, and they rely on precipitation estimates to know what to plan for. Erin Wenz, a Minneapolis-based engineer, uses precipitation models to help municipalities decide where and how to build while taking into account the possibility of extreme precipitation. “We need to change people’s expectations of what is normal,” she said.

Wenz models precipitation events using data from the National Oceanic and Atmospheric Administration’s Atlas 14, a publication that provides widely used precipitation estimates5 for most of the country. Among other things, the atlas shows how much rain qualifies a storm as a “10-year,” “50-year” or “hundred-year” rainstorm in each area — that is, storms that might be expected to occur only once in each of those timespans. Though these terms can mask the actual way such estimates work — it might be better to think about a hundred-year storm as one that has a 1 percent chance of occuring in any given year — they help set benchmarks for how robust a city’s infrastructure needs to be. 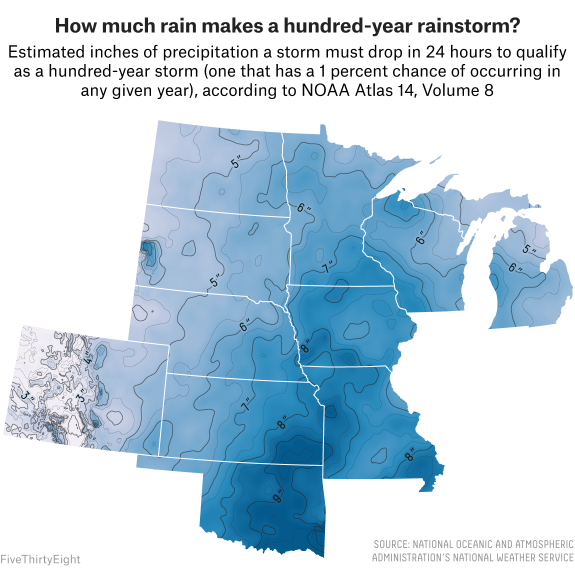 Unfortunately, until Atlas 14 was released for Minnesota in 2013,6 the most recent estimates available for Minnesota had been last updated in the ’70s. Between then and 2013, a lot of infrastructure and buildings were built using the older estimates, but precipitation had been increasing all along. The problem becomes clear, Wenz said, when she plugs Atlas 14 data into previous models: “Suddenly, I have flooding showing up as potential all across [a] built-out city.”

But even the new data isn’t perfect. While it’s much better than 40-year-old data, it’s still based on how much rain has fallen in the past. The estimates do not take into account how climate change might influence precipitation in the future. It’s a little like trying to use a road map while driving on a highway that’s still being built. The map may give you a perfect picture of the roads you’ve already traveled, but it can’t give you more than a general idea where the new highway is taking you.

According to Wenz, while the design standard has been to build roads, buildings and other infrastructure in a way that can withstand a hundred-year storm, some engineers are considering whether it’s time to build for a 500-year storm, with the expectation that soon it might no longer be such a remote possibility. Meanwhile, the National Weather Service’s Office of Water Prediction has begun a pilot program to determine how it might better estimate future precipitation. The program is scheduled to release its findings later this year, but even when it does, the NWS will still be a long way from providing better data to city planners or engineers like Wenz.

Until that data exists, if it ever does, Wenz, Waage and the municipalities they work with must make decisions based on the best information they have (and the limited resources available) as they help Minnesotans adjust to a new normal — the one they’re already living in. For Wenz, that often means bolstering infrastructure for emergency situations rather than planning massive overhauls of already-built cities. “With the knowledge that we probably can’t fix everything everywhere,” she said, “we’re thinking about it from an emergency point of view and trying to prioritize [building] in that way,” aiming to avoid the most dangerous and costly consequences of storms. For Waage, who is already focused on worst-case scenarios, finding ways to respond to emergencies faster and get information more rapidly is key to dealing with these sudden flooding events. And both agree that a big priority is informing local leaders and the public about the danger so that fewer people are caught off guard by a flood.

As the wet summer season approaches, no one knows whether 2018 will again bring historic levels of rain and flooding, but regardless, Minnesotans can be sure that those days aren’t far off.

Ella Koeze is a visual journalist for FiveThirtyEight.   @ellawinthrop