There Has to be More to It than Guns

I’m for stricter gun regulations. I’m also a 2nd Amendment guy on the left. I worry about the armed militias of the right, and how to defend innocent life. We have to begin breaking down all versions of 'the other.’ We need to change a deepening death culture?

May 31, 2018 Carl Davidson United Steel Workers of America Blog
Printer friendly
There Has to be More to It than Guns Published May 31, 2018 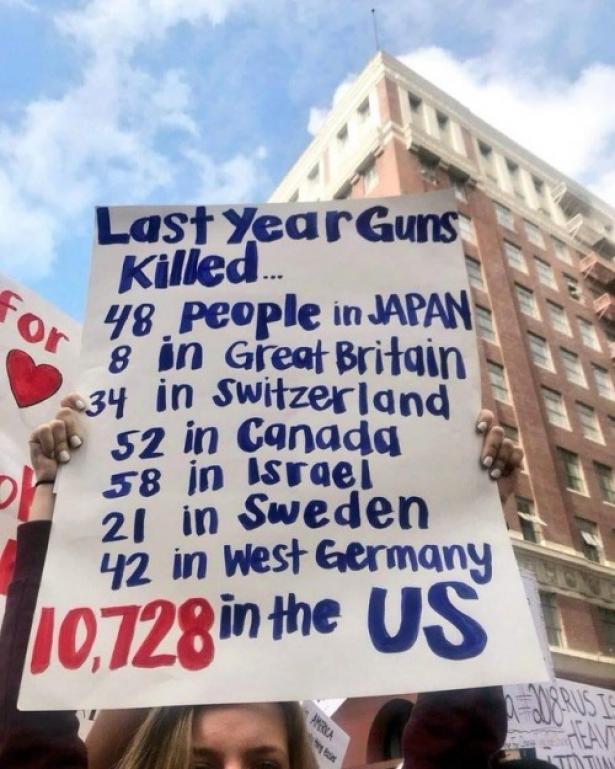 I’m for stricter gun regulations. I’m also a 2nd Amendment guy on the left. I worry about the armed militias of the right, and how to defend innocent life.

But this picture shows we have a far deeper problem. My guess is it has to do with a dying culture of empire, slavery and conquest.

In polarized end times, when no force has a firm grip, Gramsci warned us that morbid symptoms appear. Today teenagers whose narrow lifeworld is a school and video game screens, within which they suffer from a toxic masculinity, would be an example. After Columbine, it’s what a Chicago psychologist, Carl Bell,  dubbed the ‘white male entitlement disorder.’  The old supremacies are crumbling, but new relationships of solidarity, mutual aid and respect have yet to take deep root.

My gang in a working-class Western PA high school back in the late 1950s wore long black trench coats, mainly in the colder months. We were alienated from the dominant culture. We imagined ourselves in those days as some combination of 'Cools’–cool jazz fans, cool pool players like Cool Hand Luke, cool lovers like Bogie and Bacall, cool like the Pachuco Zoot Suiters.

We had fights, but none all that serious. Mostly over our budding mental patriarchy concerning girls, (who 'belonged’ to whom). As to weapons, our dream was to get our hands on a real switchblade.  But no luck. They were illegal in our state. (Regulations do work at times) We didn’t think about guns, even though many of us had them as hunting gear at home. To me, guns seemed a cheap unfair advantage. Real men fought it out with their hands.

We made fun of other cliques. But I don’t think we ever denied their humanity. Even in our alienation, we had conscience. And if not family, we had older men around us–steelworkers, WW2 and Korea vets, skilled mechanics–that set a moral boundary of existential responsibility that we might challenge (some boundaries weren’t so moral, i.e., the color line), but we still knew when to stop. We hadn’t given up on ourselves for the sake of some warped internal rage for revenge.

The youngsters today who carry out these slaughters are a teeny minority. But my guess is the circles who share their thinking, at least in part, go wider, even if still only a sizable minority. In my more alienated days, for example, all my greaser male friends talked about running away from home, of going to Mexico and other fantasies. We even made tentative plans as little groups. But I was the only one who actually did it, and those who bragged about doing it with me fell away as the day approached. I did it alone, but in a way, not all alone. And about two weeks later, far away in California, I met up with another runaway Aliquippa buddy. We talked all night, decided home was best, and we returned–subdued somewhat, queried by the cops somewhat, and most of all, sobered by sobbing parents. But we had still carved out a new and a bit freer space for ourselves. Rebellion had an upside.

My main point is that we can still touch base in our own pasts with some diluted form of the current morbidity.  But I think it’s gotten much worse. Small things indicate deeper changes. I never had a house key in those days because our house was never locked. The car keys were always in the car. Stick out your thumb at the corner, and you’d find a ride anywhere around town. No more today.

So how can we change a deepening death culture? First, we have to understand it, and understand it as such. We have to examine the hidden layers under this accompanying poster. It’s also why I was so taken recently by 'Babylon Berlin’ on Netflix. They never quite got the negativity of what was coming.

But our culture can also change positively mainly with mass insurgency from below. The high school kids demanding safety and less violence, the millions of women in pink hats demanding respect, the Black Lives Matter youngsters also demanding equality and mutual respect, and safety from those who job it is to provide it.

We can’t walk away or tune out from this. Indifference is the true evil in times of social crisis. We have to affirm our mutual respect within this mass practice, and begin breaking down all versions of 'the other.’ We try to win all those we can to see our common humanity. All this takes more than laws.  We all have to be the teams on the fields, not spectators in the bleachers. It’s personal as well as political.

[Carl Davidson, a retired computer technician, is a USW Associate Member now living in Aliquippa, Pa., his hometown, and the location of the former J&L Steel Mill, where many in his family worked and where his grandfather and a cousin died on the job. In Chicago, he served as a computer consultant for SEIU and several other unions, and was the editor of FIRR News for the Federation for Industrial Retention and Renewal during the campaigns against plant closings. In the 1960s, he was active in the civil rights movement, a national leader of student new left and the anti-Vietnam war movement. He worked on President Barack Obama’s first political campaign in Illinois, on his campaign for the U.S. Senate and for the presidency. Together with Jerry Harris, a former Chicago steelworker, he is author of CyberRadicalism: A New Left for a Global Age and editor of Solidarity Economy: Building Alternatives for People and Planet. He is the author and co-author of several other books and lectures on the topic of the Mondragon Cooperatives, a network of 120 worker-owned factories centered in Spain, and writes for the Beaver County Blue website.]