Lessons From Bobby Kennedy for Democrats Fighting to Win Back Congress

If Democrats really want to develop an economic message that is supposed to help all people, especially the most vulnerable in America, they need to start with the stark inequalities that are right in front of their noses. 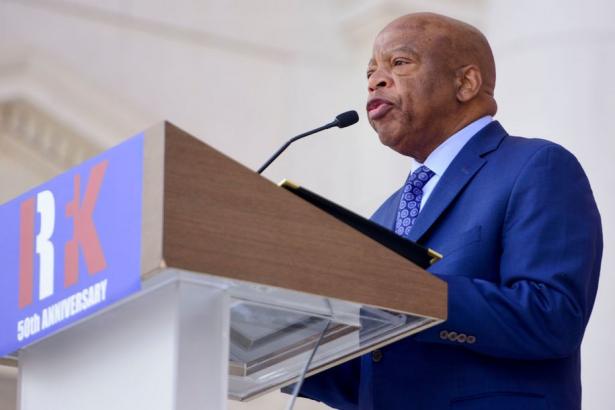 The year 1968 is largely noted as one that fundamentally changed America. A very unpopular war in Vietnam had escalated with no end in sight—dividing the country to the point that the sitting Democratic president, Lyndon B. Johnson, had decided not to seek a second term. That same year, the National Advisory Commission on Civil Disorders, also known as the Kerner Commission, issued a report that signaled a dangerous future for race relations in the US. The commission identified white racism as the reason for a series of violent riots that had occurred in cities across the country the year before. Citing discrimination in policing, barriers to affordable housing, economic inequality and poor education, the commission warned that the country was on its way to becoming two different and inherently unequal societies—one white and one black.

Nearly two weeks after the report came out, Robert F. Kennedy announced his bid to become president. His candidacy was short-lived and tragic. He announced in mid-March and in early April, Martin Luther King, Jr. was killed. Two months and a day later, Kennedy himself was shot. He died the next day. This week marks the 50th anniversary of his death. And in a year that has also been marked by huge change and transition, it's worth looking at the lessons we can learn about race and politics from Kennedy’s legacy.

In February, the Economic Policy Institute issued a report that examined the conditions of black Americans and racial inequality five decades after the Kerner Commission report. Its findings were dismal. The institute concluded that while blacks in America were “better off in absolute terms” than they were in 1968, there was almost no progress in the areas of home ownership, unemployment and incarceration rates. In fact, in many cases things were worse. Here are some of the incredibly alarming trends highlighted in the report:

So while the country and world have changed drastically in 50 years, the overall conditions have not for black America. These were some of the very things that Robert Kennedy was concerned about and tried to address in his campaign. Would they be different if he lived and become president? We’ll never know. But his work on these issues offers much food for thought and a possible road map for Democrats as they seek to take back Congress in 2018 and the presidency in 2020.

Though Kennedy is often lauded as a civil rights champion, he wasn’t always seen as a hero among the civil rights community. According to author David Margolick as quoted by NPR , the relationship between Kennedy and King was cautious.

"You have to understand that for much of white America, King was a controversial, even divisive, figure. Especially in the South, and the Kennedys needed those votes."

They also needed black votes, and King had the potential for turning out the black vote — especially in the South — or sitting on his hands. It was an interesting dilemma, says Margolick. "The Kennedys were politicians — they had to be careful with Martin Luther King. They had to cultivate him ... but they had to keep their distance from him."

While the Kennedys and King all supported and wanted the same thing, they went about it in very different ways. Even more distinct was the approach of Malcolm X and the Nation of Islam. The Kennedy administration’s slow and cautious approach to progress on civil rights led to feelings of mistrust and suspicion on the part of many in the movement. These sentiments were no doubt the reason why Kennedy received quite an education from the famous entertainers and civil rights activists he met with in 1963. Per Kennedy’s request, writer James Baldwin pulled together a group of 11 black artists, academics and leaders in the movement to meet at the Kennedy family residence in New York City. They discussed what the administration could do about civil rights and the anger that was slowly building alongside a movement that was hallmarked by non-violence. Kennedy laid out all the things that he and his brother were doing to advance civil rights and noted that they were groundbreaking. But he got an earful when he was confronted with anger about the deep racial inequality that blacks had endured for so long.

Politico recalls that it was Jerome Smith, a 24-year-old activist, who was the first that evening to show that he wasn’t afraid to challenge Kennedy.

“Mr. Kennedy, I want you to understand I don’t care anything about you and your brother,” he began. “I don’t know what I’m doing here, listening to all this cocktail party patter.” The real threat to white America wasn’t the Black Muslims, Smith insisted, it was when nonviolence advocates like him lost hope. The 24-year-old’s record made his words resonate. He had suffered as many savage beatings as any civil rights protester of the era, including one for which he was getting medical care in New York. But his patience and his pacifism were wearing thin, he warned his rapt audience. If the police came at him with more guns, dogs and hoses, he would answer with a weapon of his own. “When I pull a trigger,” he said, “kiss it goodbye.”

Smith went on to tell Kennedy that while young black people would fight for equality in America, they were unwilling to fight abroad for a country that was actively oppressing them. The meeting got even more heated when the others in the room wanted to know why the government wasn’t more aggressive in tackling systemic racism or poverty in the inner cities. Kennedy was shocked and frustrated. He was visibly angry as his guests left. But five years later, he had learned to deeply listen to black leaders—making it a practice to frequently visit black communities in rural and urban areas, working to end poverty and joblessness and standing up to segregationists. Politico suggests that this had a huge impact on his relationship with blacks and his contributions to the civil rights movement overall. Though he had a steep learning curve when it came to race, it is noted that “by the time of his death in June 1968, Bobby was the most trusted white man in black America.”

This is a lesson that Democrats in 2018 would do well to learn. The party’s approach to black communities and voters is often very similar to that of Kennedy in 1963. There is a lot of telling black people what Democrats are doing for them and not nearly enough listening. There is a longstanding trend of the party not taking black concerns or votes seriously until election time. But this is not a strategy that will serve the party well in the future. Young black people, in particular, are not about to be taken for granted and they fully expect Democrats to earn their trust, respect and votes. This starts with doing a lot of listening—to the needs, wants and concerns of black people.

Last year, Democrats rolled out a new economic plan with the messaging “A Better Deal: Better Jobs, Better Wages, Better Future.” They largely centered this message around working-class whites, hoping to appeal to the folks who voted for Donald Trump instead of Hillary Clinton. They even went to rural America to try to sell it. Yet, just a 10-minute drive from Capitol Hill in Southeast Washington, D.C., black communities are languishing in poverty. One day this April, the students and teachers at Anacostia High School, which serves primarily low-income, black students, staged a walkout when they arrived to school to find a flooded cafeteria and no functioning toilets in the entire building. The Washington Post covered the story:

The demonstration, teachers said, reflects mounting vexation over unreasonable expectations placed on teachers and disparities between the city’s wealthiest neighborhood schools and poorest. Anacostia is in a low-income swath of the city, and more than nine of every 10 students at the school are considered at-risk — defined as homeless, recipients of welfare or food stamps, and those more than a year behind in high school.

The part of the district that Anacostia High School is located in, Ward 8, is nearly 94 percent black. In 2013, the poverty rate in Ward 8 was 34 percent with 25 percent of the population facing unemployment. There is a high crime rate and a constant police presence in the area. It is also essentially a food desert, littered with fast food options but hardly any grocery stores. But since gentrification has hit almost all areas of the city, and the average family income in Ward 8 is below the citywide average and falling, it would be likely impossible for most Ward 8 residents to afford housing anywhere else in DC.

Economic inequality, poor education, discrimination in policing, lack of affordable housing options: Those are the things the Kerner Commission pointed to half a century ago as reasons why America is such an unequal society for blacks. And, this is the exact reality for so many black communities today—including ones that are just a few miles from Democratic Party headquarters in the nation’s capital. If Democrats really want to develop an economic message that is supposed to help all people, especially the most vulnerable in America, they need to start with what’s right in front of their noses. Current data shows us that the stark inequality that existed for blacks in 1968 persists today. Why is addressing this not a central part of the party platform—particularly in 2018 and leading up to 2020. Sure, paying attention to these and developing substantive policy plans to address them are all things that will help the party get votes. But in the long run it will do more to change lives. And, even more importantly, it will begin to fill America’s promise as a nation that leaves no one behind.

Bobby Kennedy had the foresight and courage to fight for this 50 years ago. He made it a point to learn from the voices of black people who held his feet to the fire and began tackling these issues in earnest. It’s time for the Democratic Party to do the very same thing. Though his life was cut short and the country might have been very different under his leadership, we must follow in his footsteps now. The situation facing black America is urgent and rapidly deteriorating under Donald Trump. The time to act is now. We cannot wait until 2068 to start seriously working to improve black lives.