D.C.’s tipped workers are nearly twice as likely to live in poverty compared to the city’s overall workforce.The concerns with the tipped wage go beyond just money—the power dynamics of the tipping system allow discrimination and inequality 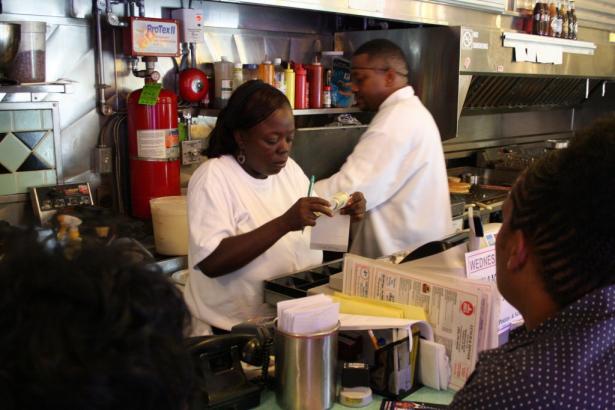 WASHINGTON, DC - AUGUST 27: 12:05 p.m. Waitress Gloria Rucker, 48, lives on 16th Street NE, behind the Capital City Diner, in Washington, DC on August 27, 2010. She moved from Maryland to the Trinidad neighborhood when she started the job. , (Photo by Dan Zak/The Washington Post via Getty Images)

This week, polls opened for early voting in Washington, D.C. This season’s campaign has been contentious when it comes to Initiative 77, a ballot measure that would gradually phase out D.C.’s tipped minimum wage, currently $3.33 per hour, and replace it with a unified minimum wage by 2026. The National Restaurant Association has come out hard against it, and signs opposing the measure have appeared in high-end dining establishments across the city.

The trouble is, there isn’t much actual information beyond the signage—and the information being shared isn’t backed by research.

D.C.’s overall minimum wage is $12.50 per hour, and will increase to $15 by 2020. By law, employers have to ensure that tipped workers make that amount as well—by combining the base wage of $3.33 with their tips—and if workers’ wages are too low, employers are required to supplement them. In practice, employers often fail to do this. Research by the Economic Policy Institute found that recent Department of Labor investigations of close to 9,000 restaurants resulted in workers receiving nearly $5.5 million in back pay because of tipped wage violations.

Low wages have left many tipped workers struggling to make ends meet. Roughly 1 in 4 D.C. bartenders, servers, manicurists and pedicurists, and shampooers made $11.71 per hour or less in 2017*—well below a living wage in the district. D.C.’s tipped workers are also nearly twice as likely to live in poverty compared to the city’s overall workforce.

The concerns with the tipped wage go beyond just money—the power dynamics of the tipping system allow discrimination and inequality to flourish. One study showed that black servers receive tips that average 15 percent to 25 percent less than white servers, and in D.C., tipped female workers are twice as likely as tipped male workers to live in poverty. It also paves the way for sexual harassment: 1 in 7 sexual harassment chargesfiled with the Equal Employment Opportunity Commission are in the accommodation and food service industry.

D.C.’s tipped workers are nearly twice as likely to live in poverty

While the evidence is clear on the positive impacts for D.C.’s lower-wage tipped workers, the District’s high-end restaurant and bar scene, with its higher-paid workforce, has been the center of attention during much of the debate, with figures ranging from Mayor Muriel Bowser to Chef José Andrés voicing concerns that the unified minimum wage will lead to higher prices and lower pay.

It’s tough to envision that high-end establishments’ well-off clientele, wine-and-dine lobbyists, and company-credit-card-wielding business travelers will suddenly become highly price-sensitive if the cost of a meal rises slightly. And any increase would likely be relatively small: Labor costs only account for an average of 30 percent of restaurant operating costs, and businesses absorb higher minimum wages through reductions in costly turnover and increases in productivity. It’s also unlikely diners would compensate for higher prices by offering a smaller gratuity: data on tipping show that tipping behavior in equal treatment states is virtually indistinguishable from tipping behavior in states that have different minimum wages for tipped workers.

What’s more, this focus on D.C.’s high-end establishments misses the bigger picture. Not only is the district home to many restaurant workers who struggle to make ends meet—even after tips—but one-fifth of D.C.’s tipped workers aren’t in the restaurant industry at all. Many valets and manicurists, for example, don’t earn 20 percent on top of an expensive meal, but the Department of Labor allows their employers to pay them D.C.’s $3.33 per hour base wage as long as they “customarily and regularly” receive $30 or more per month in tips.

Initiative 77—which 70 percent of voters support—would reduce poverty and increase economic security among tipped workers in the district, as well as better protect them against discrimination, wage theft, and sexual harassment. The effects would be particularly powerful for women and people of color. Chipping in a little more for craft cocktails and small plates at happy hour seems like a small price to pay.

* Note: At the time these data were collected, the minimum wage in Washington, D.C. was $11.50 per hour.