The Aamer family owns about 100 acres of land just half a kilometer from their home village of Mas’ha. But that land now lies on the other side of Israel’s apartheid wall in the occupied West Bank. 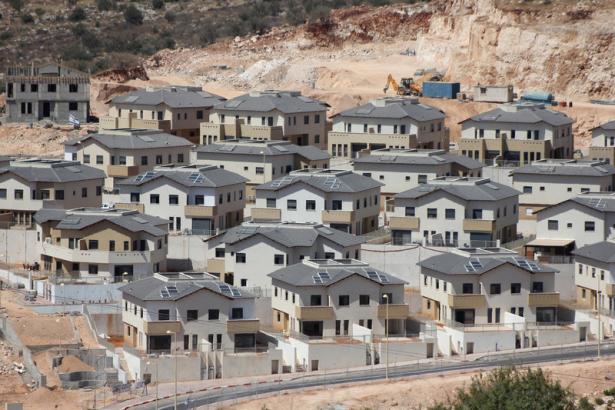 Houses under construction in 2013 in the Israeli settlement of Elkana, built on lands seized from the occupied West Bank village of Mas’ha. , Ahmad Al-Bazz/ActiveStills

Some family members have permits from the Israeli military to reach their land, but doing so is an ordeal. Instead of a short walk, it requires a 20-kilometer detour taking hours. It also requires passing through the barrier at a specially designated gate that opens only twice a day for 15-30 minutes each time.

As a result, family members now rarely visit their land. Instead of growing labor intensive crops such as wheat and barley, they now cultivate about 200 olive trees, and that is after Israeli occupation forces uprooted another 300 trees and built roads and structures on some of their land.

The Aamer family’s land is now in the heart of Elkana, an Israeli settlement built around and on some of their land with the help of Bank Mizrahi Tefahot.

This is just one case that Human Rights Watch highlights in a new report on how all of Israel’s main banks actively participate in dispossessing Palestinians.

Another settlement, financed to the tune of $53 million by Bank Leumi, is advertised as a “charming town in the center of Israel … with a breathtaking, pastoral view, among olive trees and blooming squills.”

That settlement, Alfei Menashe, is in fact built on land stolen from the Palestinian village of Azzun.

“Human Rights Watch’s new report exposes more clearly and unambiguously than before the direct and deep involvement of Israeli banks, through their business with and in the illegal Israeli settlements, in Israel’s war crimes of forcible population transfer and pillage,” Omar Barghouti, co-founder of the boycott, divestment and sanctions (BDS) movement, told The Electronic Intifada.

“Financial investors that invest in Israeli banks must conclude from this that the only way to verify that their investments are ‘settlement-free’ is by withdrawing all their investments from the complicit banks in question until they terminate their illegal settlement business,” Barghouti added.

The services provided by Israel’s banks “help support, maintain and expand unlawful settlements by financing their construction in the occupied West Bank, including partnering with developers to build homes on land unlawfully seized from Palestinians,” according to the report.

Under the United Nations Guiding Principles on Business and Human Rights, “businesses are expected to undertake human rights due diligence to identify and mitigate contributions to human rights violations of not only their own activities but also activities to which they are directly linked by their business relationships,” Human Rights Watch notes.

“None of the seven Israeli banks contacted responded to questions regarding any steps they have taken to implement” the UN Guiding Principles, according to Human Rights Watch.

But there is no way to limit the harm that comes from doing any business related to Israel’s colonies.

“Settlements inherently contribute to serious violations of international human rights and humanitarian law,” Human Rights Watch states. “Companies, including banks, that conduct business in or with settlements cannot mitigate or avoid contributing to these abuses, because the activities they conduct take place on unlawfully seized land, under conditions of discrimination, and through a serious violation of Israel’s obligations as an occupying power.”

The group urges banks to completely “cease doing business in or with Israeli settlements” because “in Human Rights Watch’s view, these activities inherently contribute to serious abuses.”

This report builds on one Human Rights Watch published last September debunking claims by Israeli banks that Israeli law requires them to provide services that aid the theft and colonization of Palestinian land.

Human Rights Watch’s recommendation that Israeli banks cease all business related to settlements is the same advice it gave to businesses worldwide in 2016.

But there is an odd gap in Human Rights Watch’s position. Its previous report in September recommended that investors – such as international pension funds – “engage” with Israeli banks, rather than simply divesting from them.

At that time, Barghouti called the recommendation “really problematic.”

If Human Rights Watch has concluded that businesses, including banks, cannot avoid complicity in war crimes as long as they do any settlement-related business, then logically investors that put money into Israeli banks are also complicit.

“Unfortunately, Human Rights Watch’s new report does not include any recommendations to investors at all,” Barghouti told The Electronic Intifada on Tuesday. “HRW should have called on investors to divest from and abstain from investing in Israeli banks that are bankrolling the occupation and settlement enterprise.”

“Only such socially responsible measures can actually compel Israeli banks to respect international humanitarian law and the human rights of Palestinians,” Barghouti added. “Instead, HRW makes rather toothless recommendations to the banks themselves, the Bank of Israel, the Israeli government and the UN Office of the High Commissioner for Human Rights.”

The report does urge the UN human rights chief to ensure that Israeli banks are listed in an as yet unpublished database of firms doing business with settlements.

Yet the message has started to get through: in 2016, the United Methodist Church divested from Israeli banks because of their role in settlements.

Despite Human Rights Watch’s reluctance to draw the inevitable conclusions from its own research, activists will find in its new report powerful evidence to persuade other investors to follow suit.

Ali Abunimah is Co-founder of The Electronic Intifada and author of The Battle for Justice in Palestine, now out from Haymarket Books.  Ali also wrote One Country: A Bold-Proposal to End the Israeli-Palestinian Impasse. Opinions are his alone.