Amid rampant inequality in America, Disney workers’ fight for a living wage could serve as inspiration for others 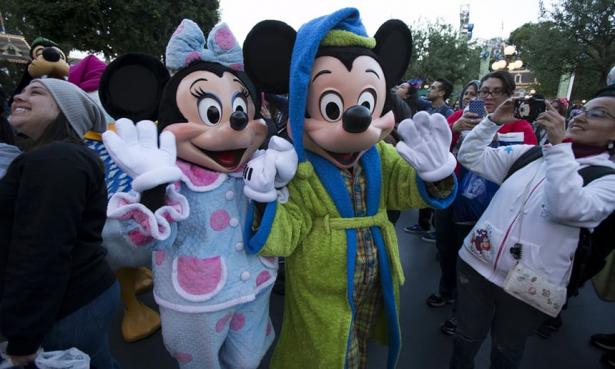 The people who walk around all day in Mickey Mouse and Donald Duck costumes, the men and women who collect tickets and manage the rides, make wages so low that they are barely surviving.’, Mario Anzuoni/Reuters

I recently went to Anaheim, California, the home of Disneyland. I wasn’t there to take my grandchildren to meet Donald Duck or Mickey Mouse or have them go on the rides. I was there to attend a rally with 2,000 Disney workers who are being ruthlessly exploited by Disney, an extremely powerful and wealthy multinational corporation. The rally was organized by a number of unions and held in a large church.

Disney is a $150bn corporation, which made $9bn in profits last year. It received a $1.6bn tax break from the Trump tax giveaway to the rich and, interestingly, has received hundreds of millions in local tax breaks from the city of Anaheim. The Disney board recently reached a four-year compensation agreement with its CEO, Bob Iger, for an estimated $423m.

And, yet, while Disney’s profits soar through the stratosphere and its CEO receives an unimaginable amount of money, the wages and benefits for its workers are atrocious. The people who walk around all day in Mickey Mouse and Donald Duck costumes, the workers who prepare and deliver the food, the men and women who collect tickets and manage the rides, make wages so low that they are barely surviving.

In October 2017, Occidental College issued a report on the economic condition of the workers at Disneyland. The Anaheim area is a very expensive community to live in and yet, despite steep increases in the cost of housing and other necessities, Disneyland workers have suffered steady pay cuts after adjusting for inflation.

The average hourly wage for Disneyland Resort workers in real dollars dropped 15% from 2000 to 2017, from $15.80 to $13.36. Today, over 80% of Disneyland workers make less than $12 an hour. Almost three-quarters say that they do not earn enough money to cover basic expenses every month. Over half of Disneyland employees report concerns about being evicted from their homes or apartments.

Reports and statistics are one thing. Hearing real human beings describe what’s going on in their lives is another, and the testimony we heard at the rally from six Disney employees was both heartbreaking and mind-blowing.

One low-wage worker wistfully described how, just a few decades ago, Disney was a place where her grandparents worked, fell in love, started a family and could live a middle-class life. But today, that magical place “where dreams come true” has become a nightmare for this worker and many thousands of others.

“Since I started working for Disney, because my wages are so low, I had to move my 16-year-old daughter out of the house,” an employee at Disney’s Grand California Hotel explained. “I can no longer afford to take care of her, so my family members have taken her in and are supporting her. I currently don’t make enough to eat three times a day. I eat cans of tuna or celery sticks and carrots because that’s what I can afford. I typically eat once, sometimes twice, a day because I can’t afford three meals a day.”

Another woman, a licensed cosmetologist, described how she had to live out of her car for three and a half months despite working 40 to 60 hours a week. Eventually she found a place to live, but now she has to drive two hours each way to get to and from work and can barely afford the necessary gas. “I work seven days a week. I pick up overtime whenever I can,” she said. “I’m still barely treading water right now.”

A Disneyland worker who left the company last year said: “I worked for 14 years with the company and I was somebody who excelled at my job. I was one of the top puppeteers.” But “in the 14 years that I worked there, I never crossed the $15 mark for pay”.

What these workers are doing, standing up against the greed of one of the most powerful and profitable corporations in America, takes an enormous amount of courage. If they are able to win a livable wage with good benefits from Disney, it will be a shot heard around the world. It will give other low-wage workers at profitable corporations throughout the country the strength they need to demand a living wage with good benefits.

Unfortunately, what is going on at Disney is not unique. In the midst of a “strong” economy and low unemployment, wages for average workers have not gone up by one penny after adjusting for inflation over the last year. Further, the Federal Reserve recently found that over 40% of the American people do not have $400 in disposable income to pay for an unexpected financial expense like a medical emergency or car repair. In the midst of massive income and wealth inequality, 140 million Americans are struggling financially, with many of them unable to afford healthcare, prescription drugs, childcare, housing or a decent retirement.

The reality is that Disney’s greed, and the greed of corporate America, is destroying the social fabric of our country. This type of ruthless capitalism is not an economic model that we should be embracing. We can and we must do better.

At a time when the three wealthiest people in America own more wealth than the bottom half and corporate CEOs have seen their incomes skyrocket, as 52% of all new income goes to the top 1%, we must create a moral economy which demands that if you work 40 hours a week, you do not live in poverty.

The good news is that workers across America are fighting back. They are sick and tired of working longer hours for lower wages. Whether it is teachers across the country fighting to adequately fund education or fast-food workers demanding $15 an hour and a union, workers all over this country are mobilizing for economic, racial and social justice. Their fight is our fight. Let us create an economy that works for all, not just the 1%.