Puerto Rico was already in trouble after suffering a “lost decade” without economic growth after 2005, leading to a default on its public debt and mass migration from the island. That was before Hurricane Maria. 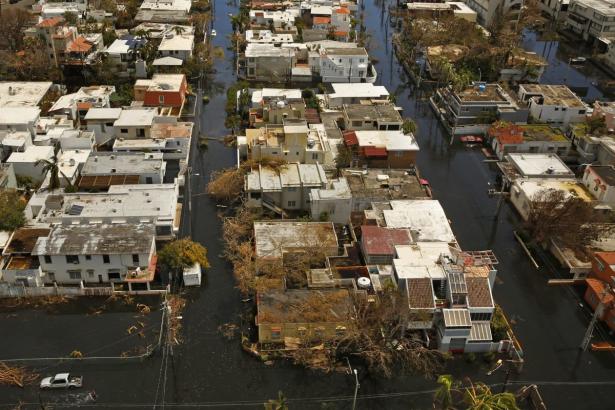 Four months after the devastation of hurricane Maria, a third of the population was still without power.,credit: Carolyn Cole/Los Angeles Times/TNS // Philadelphia Inquirer

[On September 20, 2017, Hurricane Maria, one of the most powerful storms in history, struck the island. What followed were criminally inadequate relief and reconstruction funds.]

Now some of those funds might actually end up with its creditors, compounding the outrage that the remaining residents must suffer.

A new study from Harvard University estimates Puerto Rico’s death toll from Hurricane Maria to be close to 5,000 people, prompting demands for a revision of the suspiciously low official count claiming only 64 people died as a result of the storm.

To make matters worse, the Harvard study attributes thousands of deaths to delays in receiving medical care in the storm’s aftermath. Many of these deaths were avoidable, an outrage that made many Puerto Ricans feel like they were being treated as second class citizens.

But their troubles were just beginning. With an unsustainable debt burden, the island’s finances had been handed over to a Fiscal Management and Oversight Board (the Board) that was appointed by the US Congress. Prior to the storm, the board had certified a ten-year austerity plan that would lead to another lost decade of economic growth.

In the months after Maria, some federal support started to trickle in and appropriations from the US Congress increased. Even President Trump declared the island’s public debt to be “unpayable.” The situation prompted a review of the Board’s fiscal plan, in order to account for the island’s post-hurricane reality.

When the review process started, the Board released a set of “core principles” that promised a plan that would provide sufficient relief and focus on rebuilding the island. A number of prominent economists, including Nobel laureate Joseph Stiglitz, signed a letter warning of the devastating effects that a return to austerity would have for both Puerto Rico’s people and its economy.

Yet, as my colleague Jake Johnston and I show in a new report, the Board’s new post-hurricane fiscal plan takes the same path of demanding more austerity, including sharp cuts for most government services. Government agencies are also expected to implement a series of layoffs, restrict labor rights, and cut public sector pensions across the board. The measures mandated by the Board would directly hurt a large number of Puerto Ricans already struggling to recover.

Even more shocking, the plan puts aside funds for a fiscal surplus that may be available for creditors to claim. The surplus would be about $6.1 billion over six fiscal years ― actually higher than the $4.5 billion surplus that was predicted before the storm hit.

Puerto Rico needs an estimated $95 billion to rebuild, but is due to receive just $54 billion from the federal government, and about $8 billion from private insurers. The increase in the surplus is not due to Puerto Rico having too much money, but rather to the Board’s seeming willingness to prioritize creditors’ interests over relief efforts.

One place where austerity was not considered was for the Board itself. The plan set aside a whopping $1.5 billion to cover its expenses and professional fees. The Board’s executive director has an annual salary of $625,000, topped with very generous benefits. This type of lavish spending is especially distasteful coming from an unelected body that’s mandating sharp cuts for the island’s residents.

Meanwhile, as our fellow citizens in Puerto Rico suffer, The Wall Street Journal has named Puerto Rican bonds the investment of the year. Bond prices ticked up after news of the projected surplus reached creditors, some of whom were vulture funds who bought the bonds at a steep discount, hoping to cash in at full value.

This is too much. The US Congress and the Federal government cannot continue to destroy what is left of Puerto Rico’s economy, and drive more of the population from the island (over 10 percent have already left over the past decade). The federal authorities must arrange for debt cancellation and sufficient reconstruction ― not austerity ― so that Puerto Rico can survive and return to economic growth.

[Lara Merling is a research associate at the Center for Economic and Policy Research, and lead author of the new report "Puerto Rico’s New Fiscal Plan: Certain Pain, Uncertain Gain."]