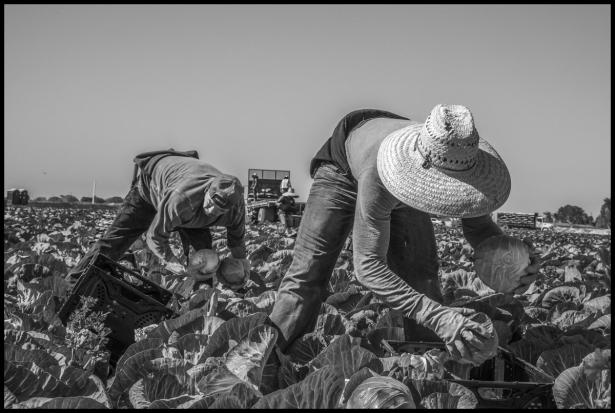 Workers packing cabbage heads coordinate with each other to work quickly, David Bacon

Next to a highway outside of Oxnard, California, I saw workers in a field near the ocean, cutting, packing, and loading cabbage. Their style of harvesting reminded me of the old lettuce crews of the 1960s and 70s, who worked in groups of three called trios—two men cutting and one man packing. This crew didn’t have that trio formation, but they clearly worked at a speed they set for themselves, just as the lechugueros once did. That’s not so common anymore. Most vegetable harvesters now work behind or in front of a big packing machine pulled through the field by a tractor. The machine sets the pace of the work. Not so here.

The crew moved down the field in a kind of collective rhythm. First came the cutters. Each reached for a cabbage head with one hand, and with the knife in the other, cleanly sliced the stem holding it to the soil. After trimming off dead or wilted leaves, the cutter placed each head next to the edge of the row for the packers who followed behind. Each of the packer’s hands grabbed a cabbage and, holding the pair against each other, turned them and slid them into place in the box. And because a box has to be there, ready and waiting, other workers grabbed them from the truck, unfolded them, and tossed them into place as they ran ahead.

This crew, working for Pablo’s Produce, was packing cabbage into plastic crates. A single man followed far behind the packers, stretching plastic film over the harvested heads. Finally came the loaders. On each side of a flatbed truck a worker lifted a full, heavy crate of a dozen or more heads to his chest. Hoisting it to shoulder height, he handed the box off to his partner high above, who lifted and tossed it into place in the growing stack, before turning for the next one.

Growing up, I used to think of cabbage as food from Irish and German tenements. Talking about the smell of boiled cabbage was a way people many times described the smell of poverty. Later, Salvadoran foundry strikers in San Francisco’s Mission District introduced me to curtido, the combination of cabbage, carrots, and onions heaped on pupusas. Whether from Europe or the Americas, the idea that cabbage is the food of the poor and of immigrants is ingrained. According to the “Bourgeois of Paris,” the anonymous journals of a 15th-century resident of Paris, in 1420 “the poor people ate no bread, nothing but cabbages and turnips and such dishes, without any bread or salt.”

Cabbage cultivation began 3,000 years ago, by the Celts of Central and Western Europe. In Istanbul, Sultan Selim III wrote an ode to the cabbage at the height of the Ottoman empire in the late 1700s. The tight-leafed vegetable traveled across the Atlantic with artichokes and Brussels sprouts, and soon was grown and eaten by the original inhabitants here as well. Some communities claim to have discovered that, like menudo, eating cabbage even cures hangovers.

Whether or not they were thinking much about that history, on that day in Oxnard, the men in the field (and it was only men) were very serious. Often, when I go into a field to take photographs, workers joke around. I do, too. Here they joked a little, too, but they didn’t stop to do it, intent on keeping up their fast pace down the field.

I didn’t ask how they were being paid, but my bet would be the piece rate, giving them a reason to work quickly. Even their jokes were about how fast they were, how they had what it takes to work bent over double, hours at a time, day after day, year in and year out. The loaders, doing the heaviest job in the field, really had that machismo. One, seeing me with the camera, struck a bodybuilding pose you might see in the gym.

However we eat it, and for whatever reason—kimchee, coleslaw, stuffed cabbage, or the strange British dish of bubble and squeak—cabbages all come out of this field and others like it. It can seem a far distance from the hands of the packer, or the exhaled grunt of the loader, to the pale, gelatinous leaves on the dinner plate. But we are connected—from the labor of these workers to our own appetite and hunger.

(Reprinted with permission from the author)