Workers at the Union Electric Steel plant in Valparaiso ended their strike after securing raises in a new four-year contract. 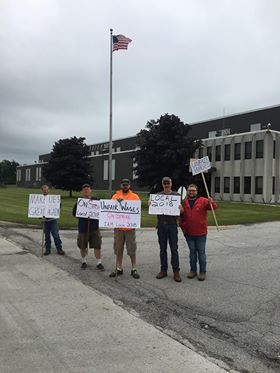 Workers at the Union Electric Steel plant in Valparaiso ended their strike after securing raises in a new four-year contract.

More than 80 workers at the plant, 3702 Montdale Drive, went on strike last month after they rejected the company's proposed pay raises of 9 percent over a four-year period as too low and inadequate to keep up with increases in the cost of living. They wanted 12 percent over four years, but ended up settling for a 10.5 percent pay hike over four years and a better health insurance plan with fewer out-of-pocket costs, worker Kyle Yarnell said. Workers at the plant make forged and cast rolls for steel mills.

"We switched over from their private insurer to a different union plan with lower out-of-pocket and deductibles," Yarnell said. "The negotiating committee was able to stick to their guns and we got one of our best contracts in a long time."

The striking workers, members The International Association of Machinists and Aerospace Workers Local 2018, returned to work in less than a week.

A spokeswoman with the Carnegie, Pennsylvania-based company did not return messages.

About two-thirds of the striking workers approved the new contract after they nearly unanimously voted to strike.

"Everyone had their own voice, but the majority was satisfied," Yarnell said. "I was pleased with the new contract. If we ended up being out of work for a long time for 1.5 percent, we never would have made it back."

The union workers objected after Union Electric Steel offered them the same 9 percent raise over four years they got during the last round on contract talks in the middle of a major downturn in the steel industry. They wanted to share in the company's prosperity at a time when business is booming, they're handling three times as many orders and the company got its corporate tax rate slashed by 14 percent.

"We had solidarity with our union brothers and sisters," Yarnell said. "We went in with as much knowledge as possible. It's public record whether the company is profitable or not profitable, and that helps a lot. If they claim to be losing money, you want to be able to tell them, 'No, you're not.' That sort of knowledge helps a lot."

Union Electric has cranked out cold mill roll products at its heat treatment and finishing plant in Valparaiso since 1971.

"We're back to business as usual," Yarnell said. "There's no animosity between us and the company. We're just happy to be back to work, and the plant is running well."