On the centenary of Nelson Mandela’s birth, Lynn Collins, British Trade Union Congress regional secretary, explains how his legacy will live on in Liverpool for generations to come. 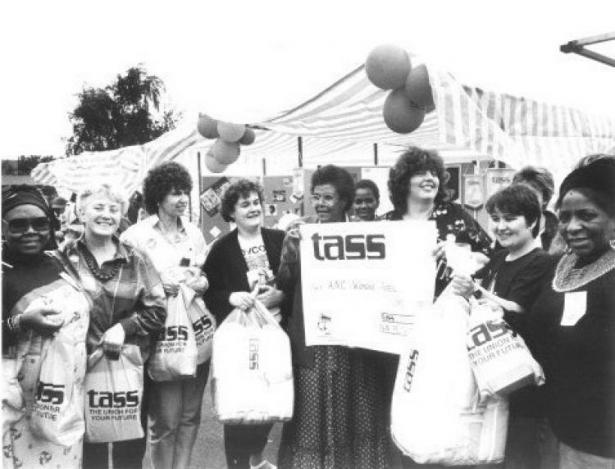 One of my first trips to London as a new union activist in the 1980s was in a minibus surrounded by women, toiletries and sanitary products, on our way to deliver material aid to South African sisters at a Women’s Day event in Finsbury Park.

Angela Davies spoke that day alongside Albertina Sisulu, and the message was as powerful as it was simple - “Free Nelson Mandela”.

And thirty years ago in 1988, it was my union TASS (now part of Unite) and its General Secretary Ken Gill, who did the behind the scenes work to make sure that the Nelson Mandela 70th birthday concert made it to the stage at Wembley, providing a world stage for that same message (you can find out more about that in our 150 stories here).

The release of Nelson Mandela in 1991, and his subsequent election as the first Black President of South Africa, is widely acknowledged for its historical significance.

But it also marked significant milestones in the activism of many, and made a huge difference for the people of South Africa and those fighting against inequality and for social justice around the world.

Mandela’s term of office, his approach to truth and reconciliation, and his absolute belief in the causes of equality and social justice still inspire millions into activism today, and we celebrate this every year on Mandela Day on 18th July.

Turn the clock forward thirty or so years and I can’t describe the sense of honour I felt as I sat in a café in Johannesburg with Maki Mandela, Nelson’s oldest daughter, showing her the designs for a permanent memorial and piece of public art in honour of her father that will be unveiled in Liverpool later this year.

How humbling it was to be thanked for our campaigning efforts over the years by a woman whose father had been incarcerated for most of her childhood, and who had personally suffered for years under the apartheid regime.

That meeting was part of a longer trip to promote the work of our community based campaign in Liverpool, “Mandela8”, supported by our patron and ex-Liverpool and England player John Barnes and 2 of his fellow ‘Liverpool legends’, Robbie Fowler and Steve McManaman.

Over the 5 days we spent with the legends we had brilliant opportunities to highlight the work we had been doing with a wider South African audience, making the front page of the local papers.

The ‘Mandela8’ campaign is raising funds to have a piece of public art installed in Princes Park in the Liverpool 8 area of the city. The artwork will have a dual role: to remember Mandela and his legacy, and to educate people about what took place.

The design itself will tell the story. The memorial will be built on an island to signify the twenty-seven years Mandela served in prison, and a newly installed bridge will link the island and the park to recognise the work Mandela did to bring together communities in South Africa.

This campaign is having a local impact already. This week, over one hundred and seventy schools across Liverpool are marking Mandela Day in school assemblies and joining in the Global ’67 Minutes ‘campaign.

Mandela gave 67 years to political activism, so these young people are giving 67 minutes to their community in honour of his legacy.

A group of young people will also address a full council meeting on Wednesday to highlight the campaign.

The fight against apartheid taught me and those of my generation so much about campaigning.

Yes, we had to contend with a Thatcher Government and mass unemployment at home. But we still needed to raise our eyes to see and to tackle oppression on a global scale.

It taught us the principles of ‘leverage’ campaigning - using consumer boycotts and high street protests to keep the message in the public eye.

Above all it taught us that campaigning isn’t always short and sharp – sometimes it may take years to win.

On that day in February 1990 when Mandela walked free from prison, all of our global efforts to highlight the injustice of apartheid became worth it.

Trades unions were at the heart of the solidarity movement here in the UK.

And trade unions will be a part of a legacy to Mandela, here in Liverpool and beyond.

[Lynn Collins is the Regional Secretary of North West TUC.]