tv Greed Is Not Good: The Anti-Capitalist Message of ‘Succession’

Whenever the money-hungry are depicted in film or TV, it just makes the audience hungry. Not so with the HBO dramedy, which captures the emptiness of chasing dollar signs. 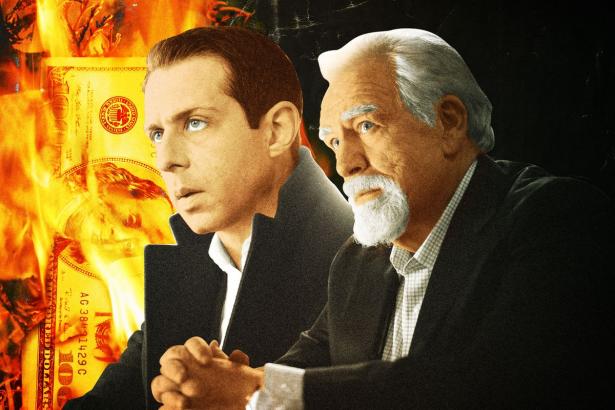 In “Prague,” the eighth episode of the HBO dark comedy Succession, Tom, a sycophantic executive at the media conglomerate Waystar Royco who was recently tasked with destroying evidence of the systematic sexual misconduct on the company’s cruise line, celebrates his looming nuptials to Shiv Roy, the daughter of Waystar’s powerful paterfamilias Logan Roy, by swallowing his own load at a subterranean, high-concept art party in Brooklyn. There’s a metaphor here. Something about how unrestrained capitalism must eventually devour itself, or maybe how its success contains the seeds of its own destruction. Whatever.

Tom’s recounting of the incident to “Cousin” Greg, great nephew of Logan Roy, is hilarious in and of itself because it’s clear he didn’t do it for intrinsic gratification derived from an intimate moment with another person. He did it because of the perceived status it conveys. And the rarer a thing is … the more valuable it must be. Right? After Greg reacts with utter confusion to the admission, Tom, almost in tears, struggles to recall the term for the act he has just taken part in. “It’s a thing. There’s a word for it. I can’t remember what it is right now,” he says. Then he takes a long, cleansing pull on a bottle of water. In Succession, greed isn’t merely a lust for money and power. It’s a pathetic species of FOMO. 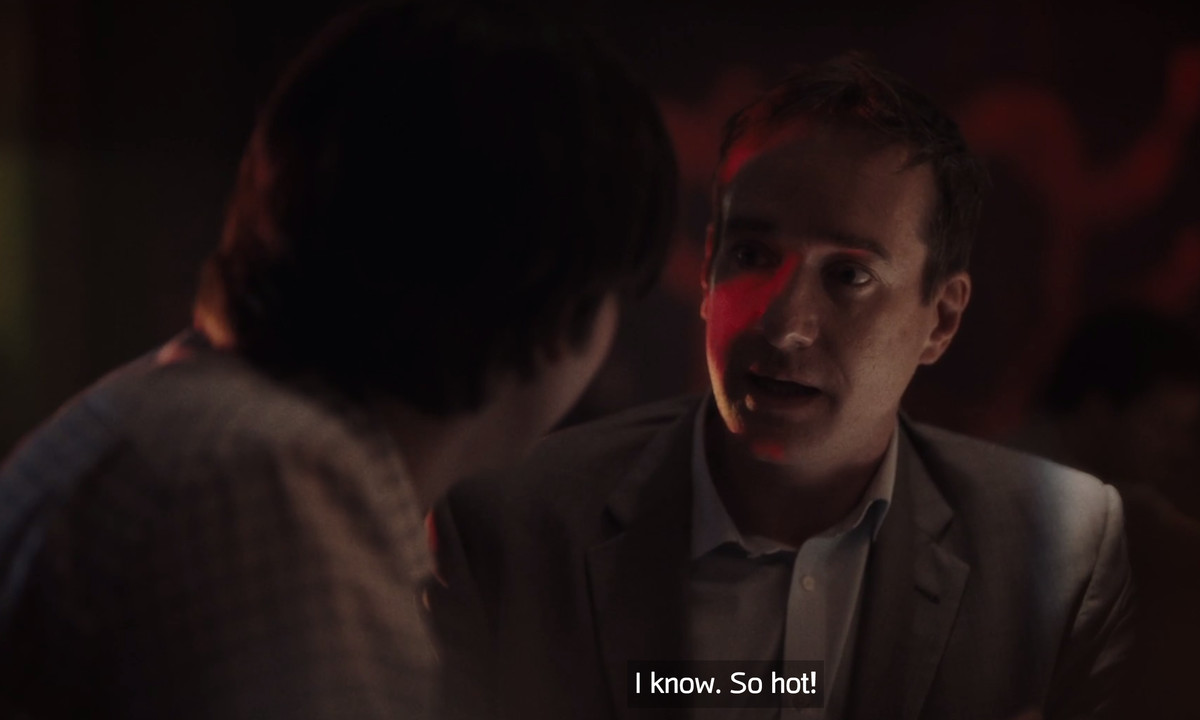 I watched this scene unfold and thought, Finally! Here is a show about greed that gets it right. It’s the first show or movie about money that successfully makes villains of its heroes. There are countless filmed stories about the evils of rampant capitalism. They all have the same problem: They make bottomless avarice look glossy and awesome and aspirational. To paraphrase a famous François Truffaut line about anti-war films: There’s no such thing as an anti-greed film (or show).

It’s the Gordon Gekko problem. Gekko (Michael Douglas channeling Pat Riley) was the villain of Oliver Stone’s 1987 anti-capitalist parable Wall Street. Ostensibly, at least. Gekko was a ruthless corporate raider. He made his appallingly luxurious living using borrowed money to surreptitiously amass ownership stakes in companies, firing the employees of those companies en masse, then carving up the carcass for choice bits to sell off. He did just that to Bluestar Airlines, where the protagonist Bud’s father worked as a mechanic and union leader. Gekko made millions; Bud’s father lost everything.

But when I think about Gordon Gekko now, here’s what I remember: Michael Douglas standing in his bathrobe on the beach, somewhere out east on Long Island, dawn breaking over his shoulder, waves crashing at his feet, cradling a fucking enormous cellphone. Funny thing, that phone—it’s a Motorola DynaTac 8000X, the world’s first true mobile phone, and it sold for $3,995 in 1984, which is more than ten grand in today’s money.

I’m sorry, but that looks great to me. Context aside (and my gosh the context is so complicated, which is part of the problem with creating fiction out of high finance), that is a mood. I suspect it looks much the same to you, reading this at work or at school or wherever, certainly not at your beachfront manse, scrolling the screen of some device that costs a fraction of what Gekko’s nearly 40-year-old phone once did.

Gekko’s notorious “Greed is Good” speech—in which he rationalizes the dismemberment of Teldar Paper, and the ruination of its workers, while waxing rhapsodically about the clarifying truth, and the overarching justice of selfishness—was supposed to be a dark manifesto, a window into the capacious hunger, and unfillable emptiness inside the man and the system he represents. The serpent making his pitch in front of the Tree of Knowledge. Instead the speech is one of the cultural touchstones of the 1980s—a rallying cry for the scoundrels Stone attempted to vilify. That, in a nutshell, is the issue: In these kind of stories, the bad guy invariably has the best bars.

It’s the same case with Martin Scorsese’s The Wolf of Wall Street. Lounging on the deck of a yacht with beautiful woman on each arm, sipping fine wine, bouncing fresh-caught lobsters off the back of a retreating James Comey, making it fucking monsoon from a wad of cash as thick as a baby’s thigh? Sign me up. Please.

Even Billions, which I very much enjoy, is really the story of two Difficult Men and their all-consuming dick-measuring competition, which just so happens to take place at the fraught nexus of finance and governance. I’m not sure Billions has a real villain. Greed and power aren’t seen as corrupting evil forces, they are presented as natural phenomena, like gravity. Even when Bobby “Axe” Axelrod’s Axe Capital imposes austerity measures on an upstate New York town—decimating its economy, laying off firefighters, cops, teachers, and librarians because a casino deal fell through—he does it with swagger and style, and with the support of his childhood sweetheart, the mother of his two sons. We never see the people his company hurts. This past season, Axe advised Kevin Durant on how to run his foundation. Seems pretty great.

I could go on. Alec Baldwin in Glengarry Glen Ross; Boiler Room, which is like if Alec Baldwin’s Glengarry monologue took place entirely in the mind of a Staten Island guido. The characters in these stories may be awful, but they’re awful in a confident way. They live by a code, even if that code is reprehensible. They are seductive in their shittiness.

Not so the characters on Succession.

Logan Roy, the show’s lion in winter Rupert Murdoch stand-in, recently peed in his son’s office, punched his grandson, and pursued a secret and generally reckless plan that may still scuttle his company.

Connor Roy is Logan’s eldest son from his first marriage. He’s currently involved with a much younger woman who is basically an escort and who openly despises him.

Kendall Roy, Logan’s second son by his second wife, and the show’s protagonist, thirsts for acceptance in a way that makes him hyper self-aware. He’s like Michael Scott with a billion dollars. Kendall is so desperate for street credibility that he buys a pair of $670 French calfskin sneakers on the way to a meeting with the creators of an app called “Dust,” then comments on the co-developer’s earrings by noting that they’re “Very cool. Very Bauhaus.” Log off Hodinkee, my guy. His pitch culminates with an excruciating “I am not like these other rich guys” speech, after which he performatively tries to throw the shoes out the window. The developers turn down his funding offer. Which is to say that Kendall is such a fuck-up and his last name so unpalatable that he can’t give away money. It’s also notable that the only time he’s able to see the matrix outlines of his family’s dysfunction is when he’s high.

Roman is Kendall’s younger brother, and he’s a petty bully whose attempts at looking strong come across as pathetic in a way that makes you squirm in your seat. Kendall, with their father’s encouragement, and possibly at Roman’s behest, used to keep Roman in a dog cage when they were young.

Shiv, Logan’s daughter from his second marriage, is a political consultant for Gil Eavis, the show’s version of Bernie Sanders. Her strategy for getting him elected to higher office is to force him to pivot to the political center. Won’t this alienate his base? Is there a political center? These questions don’t linger long in her mind because she’s too busy cheating on Tom with an old flame who is also about to be married.

Tom swallowed his own load at his bachelor party, not because he wanted to or because it would please the partner who he had just met, but for bragging rights.

I could watch these idiots grope around in the darkness of their own gilded cages forever.

My interpretation of Truffaut’s anti-war film nugget is that the visual medium is naturally inclined to depict even horrible things in ways which are aesthetically pleasing. Succession is well-shot and has firecracker dialogue and a talented cast that is easy on the eyes. But it doesn’t elevate its characters, horrible people all; it exposes them.

Much of the criticism of Succession revolves around these characters. They’re hard to relate to (Of course. They’re richer than God). They’re unlikable (GOOD!). They’re underdeveloped, weak. This, I think, is precisely what the show is going for.

I have this theory that the characters that people most often find off-putting are the ones most like real people. Skyler White was widely hated by the Breaking Bad fan base (so much so the actress who portrayed her, Anna Gunn, somewhat soured on the show itself) because she reacted to finding out her husband was a drug dealer much the way an actual person might. The Roys act like real people. People I recognize. Occasionally myself. Kendall pumping himself up with rap music on the way to a big meeting? I relate. Roman’s tinhorn cruelty? Ditto. Tom’s cloying need to impress? See it everyday. Shiv’s knee-jerk desire to stick it to her right-wing family by working for a left-wing candidate whose message she doesn’t believe in and is plotting to water down? We live in that world right now.

Stories work because of our innate empathy. But no one wants to empathize with someone who makes stupid mistakes, misreads social cues, works against their own interests, cheats, and doesn’t even get any pleasure from the cheating. We don’t empathize with characters who spend most of their time trying not to appear ashamed of who they are by being a louder version of who they think they’re supposed to be. That’s too much like us. That’s why I love this show.