Israel is Arming Neo-Nazis in Ukraine 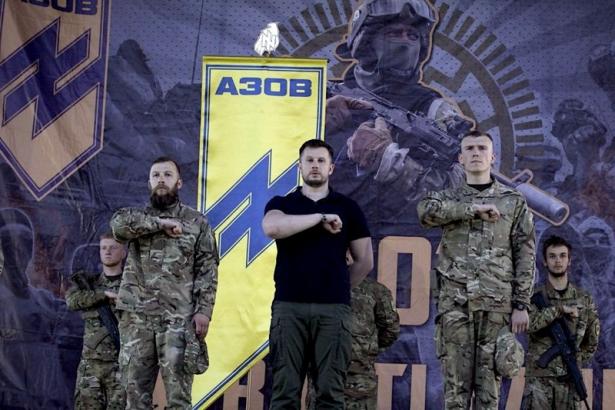 The Azov Battalion uses the Nazi Wolfsangel symbol as its logo. Its founder Andriy Biletsky (center) has moved to ban “race mixing” in the Ukranian parliament. , Azov/Twitter

Azov Battalion online propaganda shows Israeli-licensed Tavor rifles in the fascist group’s hands, while Israeli human rights activists have protested arms sales to Ukraine on the basis that weapons might end up with anti-Semitic militias.

In a letter “about licenses for Ukraine” obtained by The Electronic Intifada, the Israeli defense ministry’s arms export agency says they are “careful to grant licenses” to arms exporters “in full coordination with the Ministry of Foreign Affairs and other government entities.”

The 26 June letter was sent in reply to Israeli lawyer Eitay Mack who had written a detailed request demanding Israel end all military aid to the country.

Azov’s official status in the Ukrainian armed forces means it cannot be verified that “Israeli weapons and training” are not being used “by anti-Semitic or neo-Nazi soldiers,” Mack and 35 other human rights activists wrote.

They had written that Ukrainian armed forces use rifles made in Israel “and are trained by Israelis,” according to reports in the country.

The head of the Israeli arms export agency declined to deny the reports, or to even discuss cancellation of the weapons licenses, citing “security” concerns.

But Racheli Chen, the head of the agency, confirmed to Mack she had “carefully read your letter,” which detailed the fascist nature of Azov and the reports of Israeli arms and training.

Both the defense ministry letter and Mack’s original request can be read in the original Hebrew below.

The fact that Israeli arms are going to Ukrainian neo-Nazis is supported by Azov’s own online propaganda.

A photo on Azov’s website also shows a Tavor in the hands of one of the militia’s officers.

The rifles are produced under licence from Israel Weapon Industries, and as such would have been authorized by the Israeli government.

IWI markets the Tavor as the “primary weapon” of the Israeli special forces.

It has been used in recent massacres of unarmed Palestinians taking part in Great March of Return protests in Gaza.

Fort, the Ukrainian state-owned arms company that produces the rifles under license, has a page about the Tavor on its website.

The Israel Weapon Industries logo also appears on its website, including on the “Our Partners” page.

Starting as a gang of fascist street thugs, the Azov Battalion is one of several far-right militias that have now been integrated as units of Ukraine’s National Guard.

Staunchly anti-Russian, Azov fought riot police during the 2013 US and EU-supported “Euromaidan” protests in the capital Kiev.

The protests and riots laid the ground for the 2014 coup which removed the pro-Russian president Viktor Yanukovych.

When the civil war began in eastern Ukraine against Russian-backed separatists, the new western-backed government began to arm Azov. The militia soon fell under the jurisdiction of the Ukrainian interior ministry, and saw some of the most intense frontline combat against the separatists.

The group stands accused in United Nations and Human Rights Watch reports of committing war crimes against pro-Russian separatists during the ongoing civil war in the eastern Donbass region, including torture, sexual violence and targeting of civilian homes.

Today, Azov is run by Arsen Avakov, Ukraine’s interior minister. According to the BBC, he pays its fighters, and has appointed one of its military commanders, Vadym Troyan, as his deputy – with control over the police.

As journalist Max Blumenthal explained on The Real News in February, Biletsky has “pledged to restore the honor of the white race” and has advanced laws forbidding “race mixing.”

According to The Telegraph, Biletsky in 2014 wrote that “the historic mission of our nation in this critical moment is to lead the white races of the world in a final crusade for their survival. A crusade against the Semite-led untermenschen.”

At a military training camp for children last year, The Guardian noticed that several Azov instructors had Nazi and other racist tattoos, including a swastika, the SS skull symbol and one that read “White Pride.”

One Azov soldier explained to The Guardian that he fights Russia because “Putin’s a Jew.”

Speaking to The Telegraph, another praised Adolf Hitler, said homosexuality is a “mental illness” and that the scale of the Holocaust “is a big question.”

An Azov drill sergeant once told USA Today “with a laugh” that “no more than half his comrades are fellow Nazis.”

An Azov spokesperson played that down, claiming that “only 10-20 percent” of the group’s members were Nazis.

Nonetheless, the sergeant “vowed that when the war ends, his comrades will march on the capital, Kiev, to oust a government they consider corrupt.”

After Azov’s founder Andriy Biletsky entered parliament, he threatened to dissolve it. “Take my word for it,” he said, “we have gathered here to begin the fight for power.”

Those promises were made in 2014, but there are early signs of them being fulfilled today.

This year the battalion has founded a new “National Militia” to bring the war home.

This well-organized gang is at the forefront of a growing wave of racist and anti-Semitic violence in Ukraine.

Led by its military veterans, it specializes in pogroms and thuggish enforcement of its political agenda.

Earlier this month, clad in balaclavas and wielding axes and baseball bats, members of the group destroyed a Romany camp in Kiev. In a YouTube video, apparently shot by the Azov thugs themselves, police turn up towards the end of the camp’s destruction.

They look on doing nothing, while the thugs cry, “Glory to the nation! Death to enemies!”

Israel’s military aid to Ukraine and its neo-Nazis emulates similar programs by the United States and other NATO countries including the UK and Canada.

So obsessed are they with defeating a perceived threat from Russia that they seem happy to aid even openly Nazi militias – as long as they fight on their side.

This is also a throwback to the early Cold War, when the CIA supported fascists and Hitlerites to infiltrate from Austria into Hungary in 1956, where they began slaughtering Hungarian communist Jews and Hungarian Jews as “communists.”

According to Azov, the Canadians concluded the briefing by expressing “their hopes for further fruitful cooperation.”

Irwin acknowledged receipt of an email from The Electronic Intifada, but did not answer questions about his meeting with the fascist militia.

They said Canada is “strongly opposed to the glorification of Nazism and all forms of racism” but that “every country must come to grips with difficult periods in its past.”

The spokesperson, who did not provide a name, wrote that Canadian training “includes ongoing dialogue on the development of a diverse, and inclusive Ukraine.”

The statement said nothing about how alleged Canadian diversity training goes down with the Azov Battalion.

Konovalets is one of the group’s idols, whose portrait frequently adorns its military iconography.

Konovalets was the founder of the Organization of Ukrainian Nationalists (OUN), which later allied itself to Nazi Germany during its invasion of the Soviet Union.

The OUN took part in the notorious 1941 Lviv massacre, when the Nazis invaded Soviet territory.

During the pogrom, thousands of Jews were massacred in the now-Ukrainian city.

US aid to Nazis

Canada is of course not the only NATO “ally” to be sending arms to Ukraine.

As Max Blumenthal has extensively reported, US weapons, including rocket-propelled grenades, and training have been provided to Azov.

Under pressure from the Pentagon, a clause in the annually renewed defense bill banning US aid to Ukraine from going to the Azov Battalion was repeatedly stripped out.

This went on for three straight years before Democratic lawmaker Ro Khanna and others pushed it through earlier this year.

For his trouble Khanna was smeared in Washington as a “K Street sellout” who was “holding Putin’s dirty laundry.”

Despite the ban finally passing, Azov’s status as an official unit of the Ukrainian armed forces leaves it unclear how US aid can be separated out.

In 2014, the Israel lobby groups ADL and the Simon Wiesenthal Center refused to help a previous attempt to bar US aid to neo-Nazi groups in Ukraine.

The ADL argued that “the focus should be on Russia,” while the Wiesenthal Center pointed to the fact that other far-right leaders had met at the Israeli embassy in Ukraine – as if that somehow absolved their anti-Semitic views.

Attempts by some in Congress to bar US military aid to Nazis in Ukraine may explain military aid from Israel.

Israel’s “deepening military-technical cooperation” with Ukraine and its fascist militias is likely a way to help its partner in the White House, and is another facet of the growing Zionist-White Supremacist alliance.

Israel has historically acted as a useful route through which US presidents and the CIA can circumvent congressional restrictions on aid to various unsavory groups and governments around the world.

In 1980s Latin America, these included the Contras, who were fighting a war against the left-wing revolutionary government of Nicaragua, as well as a host of other Latin American fascist death squads and military dictatorships.

It also included the South African apartheid regime, which Israeli governments of both the “Zionist left” and Likudnik right armed for decades.

As quoted in Andrew and Leslie Cockburn’s book Dangerous Liaison, one former member of the Israeli parliament, General Mattityahu Peled, put it succinctly: “In Central America, Israel is the ‘dirty work’ contractor for the US administration. Israel is acting as an accomplice and an arm of the United States.”

Amid an alarming rise in anti-Semitism and neo-Nazism, Israel now appears to be reprising this role in eastern Europe.

With translation from Hebrew by Dena Shunra.

Asa Winstanley is an associate editor with The Electronic Intifada.