Malaya Means Free– Freedom for the 19 Arrested at NutriAsia Strike!

Duterte’s plummeting approval rate will only get worse as he continues to violently suppress any opposition whether through the drug war, martial law, extrajudicial killings, and illegal arrests. 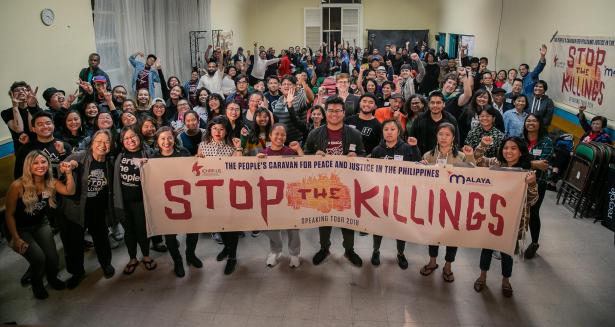 He is following in the steps of Marcos and recently-appointed House Speaker Gloria Macapagal Arroyo– these political idols amongst the most violent in all of Philippine history, Duterte included.

Immediately following President Duterte’s State of the Nation Address, where he continued his lies about economic progress and called for an end to corruption, former President Gloria Macapagal-Arroyo and other lawmakers ousted then House speaker Alvarez as an act of Duterte to consolidate control and eliminate opposition in Congress.

Soon after this, warrants were released for the arrest of Makabayan leaders on false charges originally put forth during Arroyo’s term as President in 2006. In addition, on July 30, more than 100 Philippine National Police (PNP) and NutriAsia guards violently dispersed the picket-line of 300 striking contractual workers and supporters at the NutriAsia factory in Marilao, Bulacan which resulted in serious injuries and 19 arrests of workers and supporters, including journalists. Duterte’s attacks are a continuation of what Arroyo started during her reign of terror under the discredited counter-insurgency programs Oplan Bantay Laya I and II, targeting the most vocal opposition with violence.

The MALAYA: US Movement Against Killings and Dictatorship and for Democracy in the Philippines condemns Duterte’s fascist and violent attempts to silence his opposition. We stand with Anti-Poverty Commissioner Liza Maza, former Agrarian Reform Secretary Rafael “Paeng” Mariano, and former Bayan Muna House Representatives Satur Ocampo and Teddy Casino who are innocent from the false charges and demand that these baseless, politically-motivated charges be dropped. We stand with the striking workers at NutriAsia and across the Philippines who are fighting for living wages and better working conditions, an end to contractualization, and an end to oppressive TRAIN taxes that have inflated the cost of basic necessities beyond the reach of working people. We continue to uphold the freedom of the press and defend journalists who shed light on the ongoing violations of human lives and human rights, because we all know that fake news is perpetuated by Duterte’s control of mainstream media and his online troll army.

We enjoin the public to condemn the violent dispersal of the NutriAsia workers strike and the attack on journalists and to #BOYCOTT NutriAsia products. We also call on colleagues in the mainstream media to report on developments on the NutriAsia workers strike and their struggle against contractualization, a most pressing issue faced by Filipino workers under the Duterte government. Malaya means Free in Tagalog, the freedom of the 19 arrested at the NutriAsia strike was due to the national and international pressure, including people’s lawyers and media outlets fighting for the Philippines to truly be free. Join in growing the Malaya Movement!

Support is needed for the the NutriAsia workers donating at tinyurl.com/supportNutriAsiaStrike

We call on our members and our allies to join us in an urgent action to condemn the violent dispersal and suppression of press freedom and demand justice for all those injured.