Imagine a quickly assembled militia, with legally purchased firearms and military-like training, having a standoff with US Border Patrol over the family separations that have occurred at the border of the United States and Mexico. 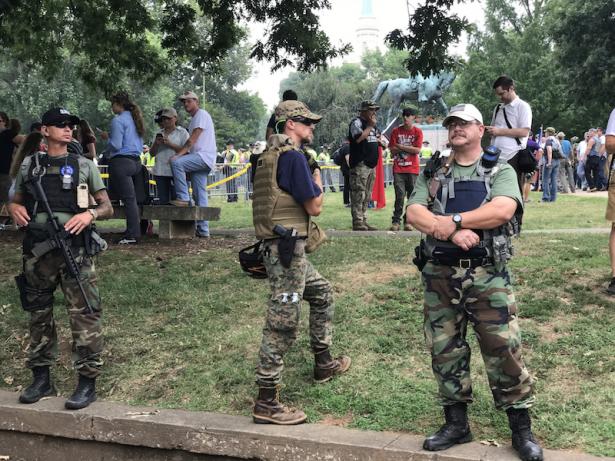 This imaginary armed group says that the law enforcement agency has unjustly violated the sovereignty of these families, and while US law says differently, the group maintains that the borders were drawn fictitiously and enforced by an undemocratic government. Bullets are exchanged. A few people on both sides are killed.

The response from Fox News and the Trump Administration would likely be furiously against the “terrorism” of this group. Fox and Trump would trumpet the need for law and order.

Contrast this hypothetical to the news that President Donald Trump has issued pardons to Dwight Hammond Jr. and his son, Steven, whose convictions for setting fires to federal lands led to the standoff at Oregon’s Malheur National Wildlife Refuge in 2016 between sovereign citizen militias and both federal and local law enforcement. The standoff included the leadership of Ammon Bundy, who had participated in a standoff against the Bureau of Land Management in Nevada in 2014. The pardons can be read as a subtle endorsement to these militias by the most powerful man in the world, who, at the same time, is waging a harsh campaign against immigrant communities through the use of other federal law enforcement agencies, Immigration and Customs Enforcement and US Border Patrol.

What accounts for this seemingly contradictory position and what is the significance of this pardon?

If you listen to right-wing AM and shortwave radio or peruse the outer reaches of the Internet, it’s not hard to conspiracy theories about “one-world government” and the use of “jackbooted” federal troops of a “new world order” who would enforce secularism, take away the guns of individual citizens and, in extreme versions of this story, put the resisters – the patriotic loyalists to state’s rights and limited federal power – in camps run by the Federal Emergency Management Agency.

This mythology, according to Spencer Sunshine, a researcher at Political Research Associates, which monitors the far-right, dates back to the origins of the anti-communist John Birch Society, which posited that the American government was controlled by communists who sought to destroy the free market and the constitution.

Seemingly preposterous, this paranoia became all too real for those who believed it in 1992, when agents from the Marshals Service, the Federal Bureau of Investigation and the Bureau of Alcohol, Tobacco and Firearms engaged in a standoff in Idaho that killed two members of the Weaver family. The hostility took place after a long investigation into Randy Weaver, a religious fanatic who was believed to be connected to white supremacist groups (one federal agent was also killed).

A year later was the siege at Waco, TX, after the ATF first attempted a raid against the Branch Davidians, ending in four agents killed and six Branch Davidians killed, and then ultimately scores more civilians, including children, killed in a fiery police offensive. Both incidents were the result, in part, of investigations into allegations of illegal weapons modifications.

At the end of 1993, the Brady Bill – which imposed waiting periods and background checks for firearms – was enacted and in the wake of these two incidents, solidifying the idea for the far-right that the federal government was embarking on a gun-snatching crusade for the purpose of completing the violent, ‘un-Christian’ destruction of America.

The anger was palpable. In 1994, right-wing radio show host G. Gordon Liddy, himself a former FBI agent who served prison time for his part in the Watergate scandal, told listeners to aim for the head, not the torso, if ATF agents come for them. Even today, it is common in mainstream conservatism to invoke the Second Amendment as a means of civilian defence against militarised government. When Rudy Giuliani, acting as Trump’s attorney, likened FBI agents to Nazi “stormtroopers” he may have sounded more like a Montana survivalist than a former law-and-order mayor of New York City, but that’s just a testament to how mainstream these ideas have come.

Christian evangelist Pat Robertson wrote the book New World Order just a few years before these two fatal incidents, alleging that American sovereignty was being subverted by a sort of one-world government made up of banks and global institutions – a continuation of John Birch Society thinking. The book was a bestseller; years later New York Times columnist Frank Rich summarized it as full of “Farrakhan-esque conspiracy theories about Jewish bankers intermingled with paranoid ramblings about the Council on Foreign Relations of the sort beloved by our better-armed militias.”

In a world of Democratic Party neoliberals in the 1990s and the neoconservatives of the Bush Administration in the early 2000s, such paleo-conservatism – the supremacy of national interest over the organisations that manage an ever-globalising society – seemed rather quaint, even though Robertson’s media empire had significant reach. Yet, today, the campaign against “globalists” is no longer in the margins but at the centre of power. It gave us the Trump Administration and the successful “Brexit” campaign. It is the ideology that now governs European countries with fascist histories, like Hungary and Austria.

It’s interesting, then, that at this moment, when Trump ran on a platform of “law and order” that, on the American right, violent resistance against the ATF or the FBI is acceptable, or at the very least rationalised, while militarised police forces like ICE and BP are lauded. The propaganda from both the White House and right-wing media hold that parents who are separated from their children are criminals, and therefore, only they can be blamed for their families’ plight.

At the same time, resisters to deportations and detentions are facing police repression, and Republican Congressman from New York Dan Donovan, who was endorsed by Trump in his successful party primary bid, has introduced legislation to target Antifa actions specifically.

“I don’t think it’s contradictory. It’s consistent,” Sunshine said in a phone interview. “They want to destroy any part of the state that redistributes power and wealth, and they want to preserve white supremacist aspects of the government.”

In fact, in Freudian terms, the best way to gauge what your political enemy is capable of doing is by hearing what they profess will be done to them. If a far-right militia leader fearfully but carefully outlines how militarised police will oppress white, Christian America with specific detail, it’s not a leap to say that this a thinly veiled statement of intent against a different population – in the current case, immigrants. “They enact their own fears,” Sunshine said, adding that when he visited the Malheur Refuge standoff he noticed armed paramilitaries on patrol, even though they publicly claim that the federal troops will one conduct unconstitutional martial law. “They say the constitution is being subverted, but they set up their own courts, they deploy their own troops in the streets.”

As Sunshine pointed out, militia movements would never apply their protests of what happened at Waco to, say, the Philadelphia Police Department’s bombing of a house in which resided members of the black militant group MOVE or police violence against Native American water protectors at Standing Rock.

With this in mind, it’s easy to write of the pardon of the Hammonds – coupled with the ongoing crisis at the border and with immigrant detentions and deportations as hypocrisy, but that’s not a sufficient response. After all, being partisan requires a degree of using a tactic for your side that you would happily deny to your enemy.

It’s also a deflection from the real problem, which isn’t that the state is being inconsistent with its use of force, but the federal government is embracing a far-right militant agenda with one hand with the Hammond pardon and enacting an anti-humanitarian policy toward asylum seekers and refugees with the other.

The goal of the far-right isn’t to eliminate the use of federal policing, Sunshine said, but rather to enforce a policy that will make the United States whiter (after all, we don’t see this kind of immigration policing in European immigrant communities to nearly the same extent).

In the US, the “Abolish ICE” movement has gained steam: groups are protesting in the streets and left-wing political candidates are embracing the call. But the ideological focus shouldn’t stop at dissolving one agency created after 9/11. For as strongly as white supremacy is centred in the anti-immigration hysteria, so too must a struggle against white supremacy be at the centre of the resistance.

Ari Paul is a journalist in New York City and has covered politics for the Nation, the Guardian, the Brooklyn Rail, VICE News, the New York Observer, Jacobin, In These Times, the Forward, Al Jazeera America and many other outlets.