August 6 and August 9 were the dates of the bombings of Hiroshima and Nagasaki. In an article written in June during a visit to Hirsohima, Vijay Prashad writes of the legacy of that tragedy and the continuing struggle for peace and disarmament. 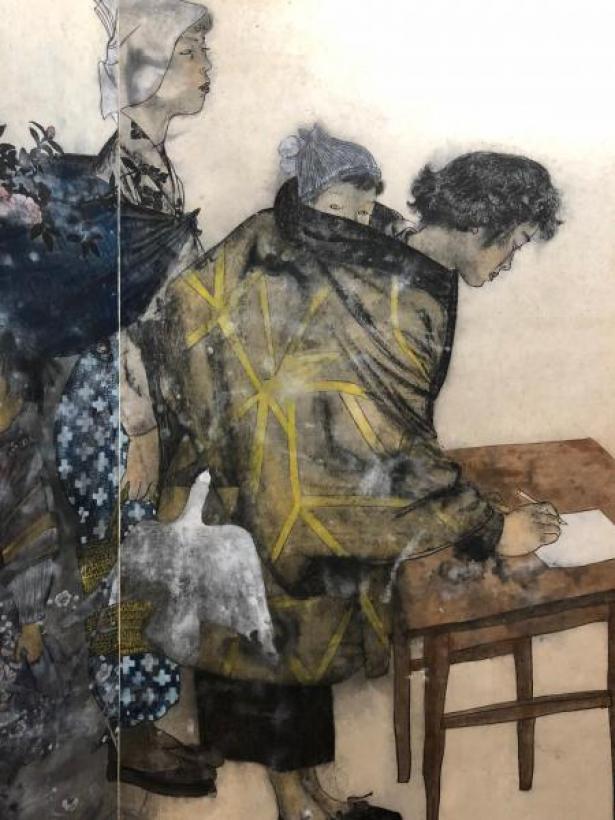 At the outskirts of Tokyo, beyond light manufacturing plants and small farms, sits an incongruous set of buildings. There is a traditional Japanese veranda near an attractive house, besides which sits a large blue building. In that building, on two floors, hang the soul of Japan – the paintings by Iri Maruki and Toshi Maruki that are collectively called the Hiroshima Panels.

Not long after the United States government dropped atom bombs on Hiroshima and Nagasaki, Iri and Toshi Maruki left Tokyo for Hiroshima. Their uncle and two nieces died in the attack; Iri’s father died six months later. The Marukis – husband and wife – looked back at the impact those months had upon them as they opened their family house to the ‘bomb victims’. ‘We carried the injured, cremated the dead, searched for food and water, made roofs of scorched tin sheets,’ they wrote. We ‘wandered about just like those who had experienced the bomb, in the midst of flies and maggots and the stench of death’.

Iri Maruki was trained in the suiboku ink-and-water technique of Nihonga painting, a combination of Japanese and European forms of art. Toshi Maruki was influenced by European art, namely the work of Marc Chagall and Käthe Kollwitz. In the ashes of World War II, the Marukis joined the Japanese Communist Party. Committed to pacifism and socialism, the Marukis spent the rest of their life documenting the horrors of war and the great human struggle to end suffering.

One Atomic Bomb’, they wrote, ‘in one instant caused the deaths of more people than we could ever portray’. And yet, their first of fifteen panels, produced in 1950 captures in essence the massive destruction and trauma of that horrible weapon. The painting is called Ghosts. The last painting – Nagasaki – was done in 1982. Over thirty-two years, the couple painted these fifteen masterpieces, explorations of the human cost of brutality. Each painting comes with a short poem written by the couple. The poem for the first painting opens with this powerful stanza,

‘It was a procession of ghosts

In an instant all clothing burned off

The purple blisters on their skin

Were soon burst and peeled off

Three paintings came in a hurry, all in 1950: Ghosts, Fire and Water. Then, the next year, two more. By 1955, they finished ten of their paintings. The tenth is important. It is called Petition. It depicts the fight by the survivors – known as the Hibakusha (explosive affected people) – to end the use of such weapons of mass destruction.

The poem that comes with that painting reads,

A petition begun to women

Spread all over Japan.

Workers of all kinds –

For the first time the people of Japan

Asserted themselves with a silent cry.

A voice that echoed throughout the land

A call for Peace’.

In Japan’s 1947 Constitution, Article 9 outlaws war as a means to settle disputes. It is a powerful clause, one that should be in the constitution of each country of the world. Japan was to have no army, only a Self-Défense Force. The following year, in far off Costa Rica, the people emerged from a terrible civil war to abolish the military. In 1949, Costa Rica’s Constitution adopted Article 12, which outlawed the military. Costa Rica remains one of the only examples of a modern state of some size with no military force and no membership in a military alliance.

The point about a membership in a military alliance is essential. Iceland has no military, but it is an active member of NATO. Japan’s lack of a formal military should also not be seen as an absence of militarism. In a treaty with the United States in 1954, Japan essentially allowed the United States – which had been occupying the country – to discharge the military responsibilities of the state. US bases in Japan as well as an overwhelming presence of US troops would continue in perpetuity. There are more US troops in Japan than there are members of the Japanese Self-Defence Forces. These bases – including on Okinawa Island – hold nuclear weapons.

Japan’s peace constituency - which included labour unions, women’s groups and the Communists – took to the streets against Japan’s subordinate position to US imperialism. On May 1, 1952, people took to the streets of Tokyo to confront the view that Japan should become the aircraft carrier for the United States. The police met the protestors with violence, leaving Bloody May Day in the lore of Japan’s left imagination. It was such protests, led by workers, that fired up the imagination of artists such as Iri Maruki and Toshi Maruki, but also their peers – Ikeda Tatsuo, Ishii Shigeo, Nakamura Hiroshi, Yamashita Kikuji and others.

In 1957, a 46-year-old woman – Sakai Nakano - went to a firing range in Gunma prefecture. She was collecting the shell casing to sell as scrap. Specialist 3rdClass William Girard of the US Army shot her to death. Girard was found guilty in a Japanese court but was allowed to leave for the United States on a suspended sentence. Nakamura Hiroshi’s ‘Gunned Down’ from 1957 captures the spirit of the violence and the outrage it provoked. These were commonplace incidents. They inflamed the spirit of the people.

Yoshihiko Ikegami, former editor-in-chief of Gendaishiso, is telling us about the upsurge in the 1950s. Protests took place before the imperial palace, in a square that was known as the People’s Square. As these protests took place, Iri Maruki and Toshi Maruki worked on their Hiroshima Panels. One more panel – Floating Lanterns – from 1969 depicts the peace movements’ custom of commemorating August 6 – the day of the nuclear attack on Hiroshima – by floating paper lanterns in rivers and lakes. Other paintings by the Maruis emphasised protests for nuclear disarmament – not only of weapons, but of nuclear power plants. Fukushima Daiichi Nuclear Power Plant’s destruction by the 2011 tsunami was foretold by those who protested against nuclear power and nuclear weapons in people’s square and in the Hiroshima Panels.

Ikegami takes us to the controversial Yasukuni War Shrine at the centre of Tokyo. This is a place where – it is said – the souls of the warriors now rest. In 1978, a thousand war criminals had their souls enshrined here. This is the heart of the controversy. Those who want to take Japan full-scale into military force worship the war dead, including the war criminals (most of whose activities were part of Japan’s brutal occupation of the Pacific Rim and of China). Emperor Hirohito refused to visit the shrine from 1978 to his death in 1990 because of the presence of these criminals.

In 1970, the Masukis took their panels to California for an exhibit. They were asked about Japanese atrocities in China. This was at the time of the US war on Vietnam. The question marked them. They returned home and painted the massive ‘Rape of Nanking’. It is a powerful image, a repudiation of the war criminals and the wars of Japan. It is flanked by a painting of Auschwitz and another of the Minamata disaster (when a chemical factory leaked mercury into the Shiranuhi Sea and poisoned animals and humans). Brutalities of war and money framed the violence of Japanese military actions. It is a warning to Japan.

Japan’s Prime Minister Shinzo Abe visited the Yasukuni Shrine. He wants – with American encouragement – to return Japan to be a military power. Washington sees this as a check on China.

Ikegami leads us to a statue of a kamakazipilot inside the Yasukuni complex. People have left offerings before this statue of a young man who would have boarded a Japanese Zero jet and crashed into an American ship. The futility of the action was clear and yet it was encouraged. There is an echo here of Abe’s hostility to the peace moves in Korea and to the rise of China. Rather than find Japan’s place in this new order, Abe – the grandson of a war criminal (Nobusuke Kishi) – wants to assert Japan’s muscularity. This is quite opposed to the noble feelings of the Hiroshima Panels.

Outside the gallery, on a table sits a series of petitions. They seek a different Japan. A Japan dreamed about at the edges of the Hiroshima Panels.

[Vijay Prashad, the author of numerous books, is the Director of Tricontinental: Institute for Social Research (thetricontinental.org) and is the Chief Editor of LeftWord Books (leftword.com).]