tv 'Claws' Has the Best Politics on Television

Representation alone isn’t enough to make a show political. You have to do something with it. Claws finds a way to tie its characters to a broader political narrative in almost every episode. 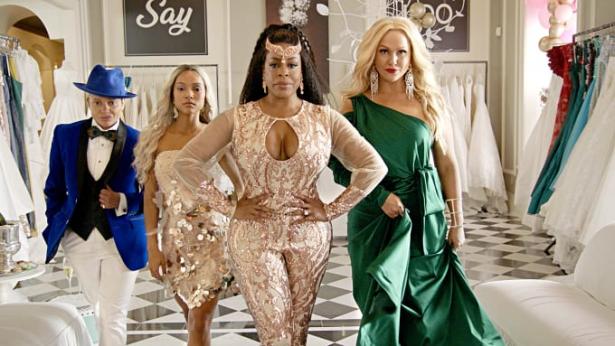 So much of television has become self-consciously political in the age of Trump. You have your late-night comedy shows delivering regular doses of righteous indignation. Then you have your feel-good boomer liberalism on shows like The Good Fight, and you have the progressive plotting designed to tackle the issues of the moment on Gen Z-friendly shows like The Bold Type, Dietland, and Vida. And shows like Roseanne and Last Man Standing (R.I.P. LOL) try to speak for the half of America that is currently in power but somehow still angry.

Despite all of the attempts to capture our political moment on TV, the show with the best politics also doesn’t wear its politics on its sleeve. This show navigates politics, race, and class with charming, hilarious, and seemingly effortless ease. That show is Claws.

The Niecy Nash-led TNT hit that follows the exploits of a nail salon-turned-drug front was always political, but in its stellar second season, the show has reached a whole new level. Showrunner Janine Sherman Barrois understands that a real discussion of politics begins with diversity. Throughout the first season, she painstakingly introduced and developed one of the most diverse casts on television, and now, in the show’s sophomore season, she is reaping the rewards.

Among the five female series regulars, you have a black woman, a Latina lesbian, a half-Asian, half-black woman, and two white women (one an ex-convict, the other a self-proclaimed redneck). In terms of minor characters, Barrios has introduced Muslim characters, disabled characters, elderly characters, and transgender characters. Even the white male characters provide a platform for representation on Claws: Dean Norris, a tough-guy character actor best known for portraying a macho cop on Breaking Bad, plays bisexual Southern kingpin Uncle Daddy on the show, and, against stereotype, he’s out and proud.

Barrios also emphasizes the economic realities of her characters. Nash’s Desna and Norris’ Uncle Daddy are nouveau riche, and significant time is spent on where in society they are accepted and where they aren’t. They both care for family members who remain on lower economic rungs, and that tension is a key aspect of their characters. Uncle Daddy’s bar fight at a private club and Desna’s attempt at wooing a higher-end white clientele are not only great drama, they’re examinations of the inescapable realities of class.

Every major character on Claws is firmly, hilariously rooted in the working class, and unlike so much of TV, their daily struggles look like the struggles of the show’s audience. While this manifests itself in hilariously trashy outfits and frequent visits to the fried shrimp stand, these economic signifiers matter on a deeper level. So many shows treat money as a given for their characters. Money matters to the characters of Claws. They pay bills. They fall behind on mortgages. They take second jobs (even if that job might be “drug mule” or “male stripper”).

Representation alone isn’t enough to make a show political. You have to do something with it. Claws finds a way to tie its characters to a broader political narrative in almost every episode. One episode has Virginia (Karrueche Tran) visiting an abortion clinic. Another places Polly (Carrie Preston) in dialogue with the Nation of Islam. Another follows Quiet Anne’s (Judy Reyes) quest for a same-sex adoption. Opioid addiction is central to the show’s entire plot.

The arc of Desna, our main character, is extremely political. Claws is a show about gangsters, guns, and nail art, but it’s also a show about intersectional feminism, which has been the main driver of this season’s plot. Zlata (Franka Potente), the reigning Big Bad, is a Russian mobstress who has more in common with Elizabeth Holmes, Sheryl Sandberg, and other self-proclaimed feminists of the tech and business world than a character from Eastern Promises. In fact, she’s the author of a book heralded as “the Russian Lean In” called Kremlin Konnection.

Zlata appears to take Desna under her wing, promoting her and taking care of her finances while degrading and humiliating her nail salon partners in crime. She loves to refer to herself, and to Desna, as a “boss bitch.” We quickly see that all of Zlata’s apparent goodwill, punctuated by repetitive feminist platitudes, is a plot to destroy Desna and alienate her from her friends. The question is just when Desna will realize it.

Terms like “Lean In Feminism” and “White Feminism” are ways to criticize limited forms of feminism like that practiced by Zlata. Neoliberal institutions—be they corporations, the government, or, in this case, the Russian mafia—raise up individuals from oppressed classes so long as they’ll conform to white capitalist expectations. While these individuals are used as tokens of diversity, the underlying circumstances of inequality remain unchanged.

Those who call out white feminism offer a similar critique. In her short video for Jezebel, journalist and filmmaker Amina Waheed explains, “In excluding women of color, you're not actually tackling the crux of the ways in which gender inequality, racial inequality, and economic inequality work in concert with each other.”

Season 2 of Claws is essentially a critique of these two concepts packaged for mass audiences with sex, gunplay, drugs, and a male strip club called “The Hammer and Pickle.”

Desna’s arc this season contrasts the selfish devil’s bargain of the “girl boss”—one that conforms to corporate, white feminism—with the kind of feminism that actually works: intersectional feminism, meaning a feminism of racial, class, gender, and sexual equality. Though the season hasn’t ended yet, it’s safe to bet that Desna is learning that Zlata’s brand of feminism—one that encourages her to leave behind the friends who helped her become what she is today—will be defeated by the solidarity of the women of the nail salon.

While Claws demonstrates its feminist bonafides time and again in its plotting, the show also announces its politics in periodic moments of unadulterated joy. In almost every episode, there is a moment where a character—often one we least expect—gets to step outside the story and have a moment to shine. Desna’s autistic brother gets to perform a strip tease, our white trash divorcees get to sing a heartfelt duet, the entire salon sometimes bursts into a choreographed routine. Yes, these moments are hilarious and heartfelt, but they are also political because they give a voice to the voiceless and reinforce the communal humanity so central to the show.

It’s strange that Claws hasn’t gotten more critical attention. It hasn’t received even 10 percent of the cultural criticism GLOW and Orange is the New Black have, though they have similar political ambitions (Claws also likely has better ratings).

There are some superficial answers to this question: TNT isn’t as sexy as Netflix among the blogging class, and cord-cutting makes writing about basic cable shows more difficult. However, you could also look to the racial and class analysis that Claws offers on a weekly basis for a better answer: Claws is about a working-class black woman who has risen, while these other shows are about privileged white women who are slumming it. Yes, there are marginalized characters in these other shows, but they’re kept where audiences might be most comfortable with them: in the background.

If Claws were just a vehicle for Niecy Nash—who is a national treasure—that would be enough. But the show refuses to leave even its most admirable characters unquestioned, just as it refuses to leave any of its myriad, diverse characters without a moment of redemptive dignity. Yes, Desna is a hero. Sure, she’s a boss bitch. But as far as Claws is concerned, a feminism that is limited to the boss bitches of the world isn’t nearly enough.

More accurately, Claws believes that given the right soundtrack and the right manicure, every one of us—even Uncle Daddy—can be a boss bitch. And that alone is a stronger political statement than pretty much anything on television has to offer.