Workers rights under the law have suffered systemic neglect since the National Labor Relations Act was passed in 1935. Fixing it is a start, but much more needs to be done. 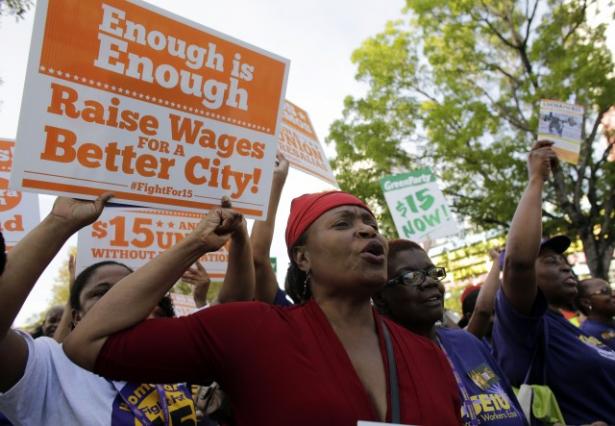 Marches in support of raising the minimum wage to $15 an hour in Miami.,AP Photo/Lynne Sladky

With Democrats looking primed to retake the House, there could be a new—and rare—opportunity to rethink labor laws in the next session of Congress. Numerous policy proposals are already making the rounds, but as progressive Democrats shop around for new labor reforms, where will they turn?

Last week, the Economic Policy Institute (EPI) released a 15-point policy agenda to reverse the decades-long erosion of workers’ rights in the U.S.

Celine McNicholas, director of labor law and policy at EPI and one of the coauthors of the agenda, says that instead of the “magic bullet” reform that lawmakers might be searching for, there is no quick-fix solution. Getting decent wages back into the pockets of workers and giving workers more power at the bargaining table will take a comprehensive reform package, she says.

Workers, she explains, suffer from a “systemic neglect” of labor law, specifically the National Labor Relations Act, which hasn’t been updated to address the tremendous economic changes workers have experienced since it was enacted in 1935. (Or more precisely, updated in ways that help workers: Business interests have managed to weaken the law through amendments like the Taft-Hartley Act and a serious of anti-worker court rulings.) As a result, employers have become experienced in throwing wrenches into the current system, like labeling their workers as independent contractors to avoid the reach of unions or launching propaganda campaigns when they hear a whisper about unionization.

Enter the EPI agenda, called “First Day Fairness,” a nod to the fact that workers have little to no bargaining power in their workplaces from their first day on the job. Most of the reforms are not necessarily new ideas, but taken together, they would help rebalance a system that’s currently tilted against workers.

The agenda lays out a reform plan that would strengthen unions in the U.S., ensure workers are fairly compensated for their work through a living wage and access to overtime, guarantee basic job quality by affirming paid sick leave and predictable scheduling, and prohibit employers from requiring workers to “sign away their rights” through non-compete agreements that limit their ability to seek other jobs. More radically, the agenda also recommends ending at-will employment—the ability of employers to discharge workers at their discretion.

The most important item on the agenda, says McNicholas, is strengthening collective bargaining. Because one of the main culprits of the erosion of workers’ rights is the erosion of union membership, the agenda highlights greater union protections as a priority. Although McNicholas says that all these reforms need to be done together, she also says that if policymakers did want to focus on one specific area, then that area should be unions. If unionized employees have access to collective bargaining and the right to strike, they can demand better conditions and will be more likely to have access to the other recommended reforms like increased wages, paid sick leave, and safer workplaces.

The agenda also notes that the reforms will particularly help people of color and women, who disproportionately work in low-wage jobs with limited protections, and who earn lower wages than their white male counterparts. Policies that increase the influence of unions and set fairer labor standards will disproportionately benefit marginalized workers.

Taken one-by-one, the EPI proposals actually already have been advanced in a range of separate bills introduced by Democratic members of Congress. The identities of these bills’ authors come as no great surprise: Senators Bernie Sanders of Vermont and Patty Murray of Washington state, and Representatives Rosa DeLauro of Connecticut and Bobby Scott of Virginia frequently crop up in the list of primary sponsors. But what McNicholas says stood out to her as encouraging was the sheer number of cosponsors the bills had—plenty of Democrats had signed onto these proposals. It may be that more Democratic legislators are prioritizing workers’ concerns than has been the case in many decades. Indeed, one of the key bills that the EPI agenda spotlights, the Workers’ Freedom to Negotiate Act, is part of the Democratic leadership’s “Better Deal” framework. This act aims to make unionization more accessible to workers by increasing the penalties on employers who violate the law, creating a mandatory mediation and arbitration process to ensure that a union and a company actually reach a contract, banning state right-to-work laws, and strengthening the right to strike by preventing employers from hiring permanent replacements.

The last time that Democrats had an opportunity to strengthen labor law was in 2009, when they introduced the Employee Free Choice Act (EFCA). That act would have given employees the right to form a union if a majority of workers signed union affiliation cards, thereby circumventing employers’ efforts to scare workers into voting against unionization. Attacks from the right and from business ensured that it failed.

Today, many involved in the labor movement, like Shaun Richman, program director at the Harry Van Arsdale Jr. Center for Labor Studies at SUNY Empire State College, says the legislation didn’t go far enough, and that more radical solutions are required to close the huge power gap between management and labor.

Richman supports EPI’s agenda and says that it is “really good and necessary”—but that it’s largely focused on “plugging the holes” in a system of “contract unionism.” Contract unionism means that a union contract is with one company or one workplace. “The big thing we have to do,” says Richman, “is get beyond [that].”

One way to do that is to enact a law requiring sectoral bargaining, as it shifts the scope of the contract from a shop-by-shop framework to the level of the sector as a whole. Under the current system, management may fear that if it goes union, it will be at a competitive disadvantage with its competitors—a fear that often fuels the fanatical level of opposition that businesses often mount against their workers’ attempts to unionize. If the terms of a contract are applied sector-wide, however, the ostensible disadvantage of going union would be eliminated, or at minimum, diminished.

Richman points to wage boards as one way to do sectoral-level bargaining. They’re not a new idea in the U.S. or, in various permutations, in other nations. Instead of collective bargaining at the firm level, bargaining happens at the industry level. That’s how New York was able to implement a $15 minimum wage for fast food workers—through the New York Fast Food Wage Board. Some wage boards can be found in the U.S. on the state level or the city level, but they could be implemented at the national level, as they are in many countries in Europe. Wage boards are not a substitute for a union contract at a particular work site—the union contract still strengthens workers’ power within their company, and sectoral bargaining enables those workers to focus on winning other rights and benefits without fear of their employer retaliating by reducing their wages.

One item included in the EPI agenda that Richman terms both critically important, and radical for a policy agenda, is its call for ending at-will employment nationally. Under the at-will employment system in the U.S., an employer can fire a worker for basically any reason other than the discriminatory ones specified in the Civil Rights Act. (Firing a worker for trying to form a union is illegal under the NLRA, but the penalties for doing so are practically nonexistent, unlike the penalties for firing workers due to their race, gender, and religion, for which the penalties under the Civil Rights Act can be considerable.) Not only would requiring an employer to give an actual reason to fire someone better protect workers without a union (requiring a “just cause” for dismissal is standard in union contracts), but it would also better protect union organizers from illegal retaliatory firing. (Frequent Prospect contributors Richard Kahlenberg and Moshe Marvit have written that adding union organizers to the protected category of workers under the Civil Rights Act would be one way to address that concern.)

Besides EPI’s comprehensive agenda, a flurry of bills has been introduced recently to bolster workers’ rights. Massachusetts Senator Elizabeth Warren, for example, just launched her reform agenda, which focuses on reeling in the power of corporations. One of her most prominent proposals includes requiring worker representation on corporate boards.

Among labor advocates and throughout Democratic ranks, there’s a growing belief that multiple approaches are required to redress the imbalances between employers and employees, between capital and labor. If the Democrats can retake the federal government in 2020, progressive lawmakers should be thinking big—and big ideas need to be put in front of them.

Kalena Thomhave is a writing fellow at the Prospect.