To Restore Civil Society, Start With the Library

Is the public library obsolete? A lot of powerful forces in society seem to think so. Libraries are being disparaged and neglected at precisely the moment when they are most valued and necessary. Libraries are an example of “social infrastructure.” 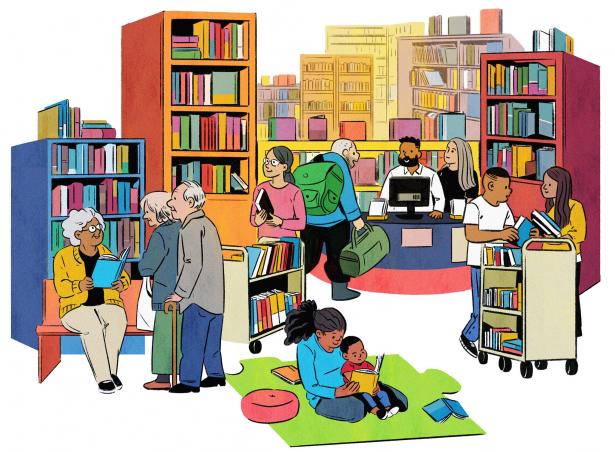 In recent years, declines in the circulation of bound books in some parts of the country have led prominent critics to argue that libraries are no longer serving their historical function. Countless elected officials insist that in the 21st century — when so many books are digitized, so much public culture exists online and so often people interact virtually — libraries no longer need the support they once commanded.

Libraries are already starved for resources. In some cities, even affluent ones like Atlanta, entire branches are being shut down. In San Jose, Calif., just down the road from Facebook, Google and Apple, the public library budget is so tight that users with overdue fees above $20 aren’t allowed to borrow books or use computers.

But the problem that libraries face today isn’t irrelevance. Indeed, in New York and many other cities, library circulation, program attendance and average hours spent visiting are up. The real problem that libraries face is that so many people are using them, and for such a wide variety of purposes, that library systems and their employees are overwhelmed. According to a 2016 survey conducted by the Pew Research Center, about half of all Americans ages 16 and over used a public library in the past year, and two-thirds say that closing their local branch would have a “major impact on their community.”

Libraries are being disparaged and neglected at precisely the moment when they are most valued and necessary. Why the disconnect? In part it’s because the founding principle of the public library — that all people deserve free, open access to our shared culture and heritage — is out of sync with the market logic that dominates our world. But it’s also because so few influential people understand the expansive role that libraries play in modern communities.

Libraries are an example of what I call “social infrastructure”: the physical spaces and organizations that shape the way people interact. Libraries don’t just provide free access to books and other cultural materials, they also offer things like companionship for older adults, de facto child care for busy parents, language instruction for immigrants and welcoming public spaces for the poor, the homeless and young people.

I recently spent a year doing ethnographic research in libraries in New York City. Again and again, I was reminded how essential libraries are, not only for a neighborhood’s vitality but also for helping to address all manner of personal problems.

For older people, especially widows, widowers and those who live alone, libraries are places for culture and company, through book clubs, movie nights, sewing circles and classes in art, current events and computing. For many, the library is the main place they interact with people from other generations.

For children and teenagers, libraries help instill an ethic of responsibility, to themselves and to their neighbors, by teaching them what it means to borrow and take care of something public, and to return it so others can have it too. For new parents, grandparents and caretakers who feel overwhelmed when watching an infant or a toddler by themselves, libraries are a godsend.

In many neighborhoods, particularly those where young people aren’t hyper-scheduled in formal after-school programs, libraries are highly popular among adolescents and teenagers who want to spend time with other people their age. One reason is that they’re open, accessible and free. Another is that the library staff members welcome them; in many branches, they even assign areas for teenagers to be with one another.

To appreciate why this matters, compare the social space of the library with the social space of commercial establishments like Starbucks or McDonald’s. These are valuable parts of the social infrastructure, but not everyone can afford to frequent them, and not all paying customers are welcome to stay for long.

Older and poor people will often avoid Starbucks altogether, because the fare is too expensive and they feel that they don’t belong. The elderly library patrons I got to know in New York told me that they feel even less welcome in the trendy new coffee shops, bars and restaurants that are so common in the city’s gentrifying neighborhoods. Poor and homeless library patrons don’t even consider entering these places. They know from experience that simply standing outside a high-end eatery can prompt managers to call the police. But you rarely see a police officer in a library.

This is not to say that libraries are always peaceful and serene. During the time I spent doing research, I witnessed a handful of heated disputes, physical altercations and other uncomfortable situations, sometimes involving people who appeared to be mentally ill or under the influence of drugs. But such problems are inevitable in a public institution that’s dedicated to open access, especially when drug clinics, homeless shelters and food banks routinely turn away — and often refer to the library! — those who most need help. What’s remarkable is how rarely these disruptions happen, how civilly they are managed and how quickly a library regains its rhythm afterward.

The openness and diversity that flourish in neighborhood libraries were once a hallmark of urban culture. But that has changed. Though American cities are growing more ethnically, racially and culturally diverse, they too often remain divided and unequal, with some neighborhoods cutting themselves off from difference — sometimes intentionally, sometimes just by dint of rising costs — particularly when it comes to race and social class.

This summer, Forbes magazine published an article arguing that libraries no longer served a purpose and did not deserve public support. The author, an economist, suggested that Amazon replace libraries with its own retail outlets, and claimed that most Americans would prefer a free-market option. The public response — from librarians especially, but also public officials and ordinary citizens — was so overwhelmingly negative that Forbes deleted the article from its website.

We should take heed. Today, as cities and suburbs continue to reinvent themselves, and as cynics claim that government has nothing good to contribute to that process, it’s important that institutions like libraries get the recognition they deserve. It’s worth noting that “liber,” the Latin root of the word “library,” means both “book” and “free.” Libraries stand for and exemplify something that needs defending: the public institutions that — even in an age of atomization, polarization and inequality — serve as the bedrock of civil society.

If we have any chance of rebuilding a better society, social infrastructure like the library is precisely what we need.

[Eric Klinenberg (@EricKlinenberg), a professor of sociology and the director of the Institute for Public Knowledge at New York University, is the author of the forthcoming book “Palaces for the People: How Social Infrastructure Can Help Fight Inequality, Polarization, and the Decline of Civic Life,” from which this essay is adapted.]