House Democrats should pledge now that if they win a majority, they will conduct an impeachment investigation, to get to the truth. He should be removed from the Federal Appeals Court. Holton-Arms Alumnae statements supporting Christine Blasey. 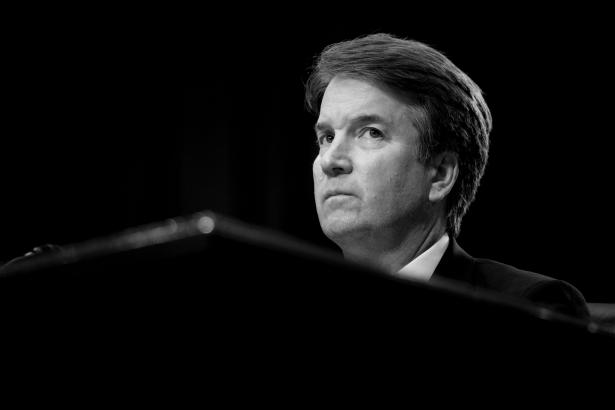 The Case for Impeaching Kavanaugh

If the Democrats win the House this fall, they can investigate the charges against him, should he be confirmed.

Charles Grassley, the chairman of the Senate Judiciary Committee, and Mitch McConnell, the Senate majority leader, seem determined to call a vote next week on the confirmation of Judge Brett Kavanaugh to be an associate justice of the Supreme Court, even in the face of this week’s sexual assault allegations against him.

Senate Republicans assume, correctly, that if they can hold the party line, his installation on the Supreme Court is a sure thing. This is certainly true — even if the Democratic caucus in the Senate holds firm against Mr. Kavanaugh, they simply lack the votes to block him. But the Republicans’ calculus contains a significant error — namely, the assumption that if Mr. Kavanaugh is confirmed to the Supreme Court, that’s the end of the discussion of whether he is fit to serve.

The Constitution does provide that federal judges, including Supreme Court justices, “shall hold their Offices during good Behavior.” The settled understanding of this phrase is that so-called Article III judges enjoy lifetime tenure. But the Constitution also makes both judicial and executive officers subject to impeachment. And, as it happens, the House of Representatives holds “the sole Power of Impeachment.” If the Democrats win back the House in November, they can exercise that power.

Impeachment proceedings in the House are investigative in nature and come with a full panoply of quasi-judicial powers, including aids to investigations, such as the power to subpoena witnesses to compel them to appear and testify (subject, of course, to constitutional privileges, if applicable, such as the Fifth Amendment’s guarantee against self-incrimination).

If a simple majority of the House decided to proceed with impeachment, the House Judiciary Committee would be empowered to conduct a thorough and careful investigation of the sexual misconduct allegations that Professor Christine Blasey Ford has made against Mr. Kavanaugh involving a drunken sexual assault when both were high school students in suburban Washington, D.C.

Nor should the Democrats wait to formally take control of the House in January. The House Democratic leadership should pledge now that if they win a majority, they will conduct an impeachment investigation, to get to the truth. Doing so today would make clear to the Senate Republicans that if they rush to judgment, in the absence of a full and fair investigation, there will still be an investigation.

To be sure, the impeachment of a Supreme Court justice is a rare thing in our democracy. The last member of the Supreme Court to face a credible threat of impeachment was Associate Justice Abe Fortas, whom President Lyndon Johnson had nominated to replace Earl Warren as chief justice. Credible allegations of financial misconduct involving a lifetime paid consultancy with the Wolfson Foundation were made against Justice Fortas — Wolfson was facing federal criminal charges that could easily have found their way to the Supreme Court.

Under withering bipartisan criticism, Justice Fortas withdrew his nomination, and ultimately resigned from the Supreme Court. Had he not resigned, however, there’s a good chance he would have been impeached. (The only justice to be impeached was Samuel Chase, who was accused in 1804 of allowing his partisan views to affect his decisions, but the effort to oust him failed in the Senate.)

Of course, even if the House impeached Mr. Kavanaugh, it would still take a two-thirds majority in the Senate to convict and remove him from the Court. But the Senate vote would surely have at least something to do with the merits of the House’s case: If a full and fair investigation shows that Mr. Kavanaugh has lied regarding the incident — he has denied it categorically and says nothing even remotely like it ever occurred — Republican senators may find it hard to vote “no” in the #metoo era. It would be a terrible blow to the legitimacy of the Supreme Court, of course, but this is the risk that Senators McConnell and Grassley seem willing to take.

Moreover, an impeachment investigation could also encompass allegations that Mr. Kavanaugh has committed perjury before the Senate, twice, related to his work on the nomination of District Judge Charles Pickering to be a judge on the Court of Appeals for the Fifth Circuit. Under oath, both in 2006 and in 2018, he said he had no involvement with the White House strategy sessions associated with Judge Pickering’s nominations. Subsequently released emails, involving these sessions, suggest that these answers were at best misleading and at worst totally false.

Attending a strategy session as a White House staffer is not a crime. Lying under oath to the Senate Judiciary Committee, on the other hand, is. Perjury would be a perfectly justifiable, and constitutional, basis for impeachment.

An important caveat: Congress must take care to maintain the constitutional convention that has existed since the failed impeachment of Justice Chase. Federal judges, including members of the Supreme Court, should not be impeached based on their judicial rulings or philosophy. Accordingly, if the House were to initiate impeachment proceedings against Justice Kavanaugh in 2019, such proceedings should be strictly limited to questions associated with his alleged intentional and deliberate efforts to mislead the Senate about his character and fitness to serve.

We do not know the truth of the troubling allegations against Judge Kavanaugh. But, before someone is confirmed to the Supreme Court, good faith efforts to discover the truth should be made. And if the Senate won’t conduct a credible investigation now, the House should offer its assistance next year.

[Ronald A. Krotoszynski Jr. is a professor at the University of Alabama School of Law.]

We are alumnae of the Holton-Arms School, and we are writing in support of Dr. Christine Blasey Ford, a fellow Holton graduate.

We believe Dr. Blasey Ford and are grateful that she came forward to tell her story. It demands a thorough and independent investigation before the Senate can reasonably vote on Brett Kavanaugh's nomination to a lifetime seat on the nation's highest court.

Dr. Blasey Ford's experience is all too consistent with stories we heard and lived while attending Holton. Many of us are survivors ourselves.

Holton’s motto teaches students to “find a way or make one.” We dream of making a world where women are free from harassment, assault, and sexual violence. We are deeply grateful to Dr. Blasey Ford for bravely stepping forward and bringing us closer to that world we all seek.

Dr. Blasey Ford’s peers from the class of 1984 have their own letter — you can read it here.

We Stand With Dr. Christine Blasey Ford - The Class of 1984

In a separate effort, the class of 1984 has put together their own, dedicated letter. You can download it here.

To the United States Congress:

We, of the Holton Arms Class of 1984, are writing on behalf of our friend and classmate, Dr. Christine Blasey Ford, to attest to her honesty, integrity, and intelligence; and to contend that her decision to provide information pertaining to a sexual assault is not a partisan act. It is an act of civic duty and the experience she described in her letter needs to be seriously considered. We represent all political parties and we support Christine bringing this matter forward.

Christine has had to weigh the personal cost of sharing her experience against her own conscience. We recognize that this has been an extraordinarily difficult decision and admire her courage for being willing to speak her truth when it would have been easier to stay silent.

As sexual assault violates a woman’s most fundamental rights, it must be considered a failure of character at any age—regardless of the subsequent accomplishments and power attained by the offender. It should not be dismissed as youthful bad judgment, however aberrant it may be.

In light of Christine’s experience, we hold our elected officials responsible for conducting a more thorough and comprehensive review of this Supreme Court nominee. Having taken this courageous step, Christine deserves your due consideration on this serious matter.

We stand with our friend Dr. Christine Blasey Ford and admire her honesty and resolve on behalf of our nation.

[Letter was signed by Dr. Christine Blasey Ford's classmates from 1984 at Holton-Arms. See full list of these alumnae here.]