A newly-discovered seven-page letter by Galileo is one of the earliest manifestos for scientific freedom. It documents Galileo's damage control at the start of his battle with the religious authorities. 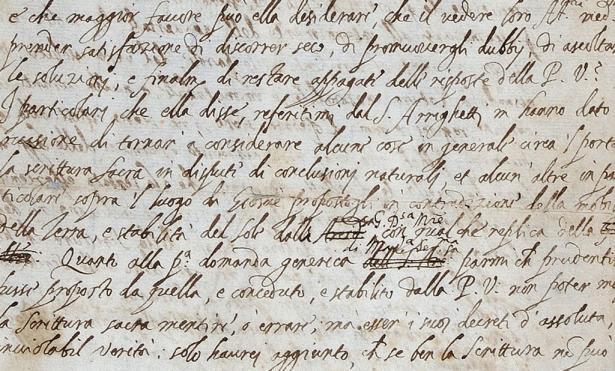 The original letter in which Galileo argued against the doctrine of the Roman Catholic Church has been rediscovered in London. , The Royal Society

It had been hiding in plain sight. The original letter — long thought lost — in which Galileo Galilei first set down his arguments against the church’s doctrine that the Sun orbits the Earth has been discovered in a misdated library catalogue in London. Its unearthing and analysis expose critical new details about the saga that led to the astronomer’s condemnation for heresy in 1633.

The seven-page letter, written to a friend on 21 December 1613 and signed “G.G.”, provides the strongest evidence yet that, at the start of his battle with the religious authorities, Galileo actively engaged in damage control and tried to spread a toned-down version of his claims.

Many copies of the letter were made, and two differing versions exist — one that was sent to the Inquisition in Rome and another with less inflammatory language. But because the original letter was assumed to be lost, it wasn’t clear whether incensed clergymen had doctored the letter to strengthen their case for heresy — something Galileo complained about to friends — or whether Galileo wrote the strong version, then decided to soften his own words.

Galileo did the editing, it seems. T﻿he newly unearthed letter is dotted with scorings-out and amendments — and handwriting analysis suggests that Galileo wrote it. He shared a copy of this softened version with a friend, claiming it was his original, and urged him to send it to the Vatican.

The letter has been in the Royal Society’s possession for at least 250 years, but escaped the notice of historians. It was rediscovered in the library there by Salvatore Ricciardo, a postdoctoral science historian at the University of Bergamo in Italy, who visited on 2 August for a different purpose, and then browsed the online catalogue.

“I thought, ‘I can’t believe that I have discovered the letter that virtually all Galileo scholars thought to be hopelessly lost,’” says Ricciardo. “It seemed even more incredible because the letter was not in an obscure library, but in the Royal Society library.”

The first and last page of Galileo’s letter to his friend Benedetto Castelli. The last page shows his signature, “G. G.”.Credit: The Royal Society

Galileo wrote the 1613 letter to Benedetto Castelli, a mathematician at the University of Pisa in Italy. In it, Galileo set out for the first time his arguments that scientific research should be free from theological doctrine (see ‘The Galileo affair’).

He argued that the scant references in the Bible to astronomical events should not be taken literally, because scribes had simplified these descriptions so that they could be understood by common people. Religious authorities who argued otherwise, he wrote, didn’t have the competence to judge. Most crucially, he reasoned that the heliocentric model of Earth orbiting the Sun, proposed by Polish astronomer Nicolaus Copernicus 70 years earlier, is not actually incompatible with the Bible.

Galileo, who by then was living in Florence, wrote thousands of letters, many of which are scientific treatises. Copies of the most significant were immediately made by different readers and widely circulated.

His letter to Castelli caused a storm.

Of the two versions known to survive, one is now held in the Vatican Secret Archives. This version was sent to the Inquisition in Rome on 7 February 1615, by a Dominican friar named Niccolò Lorini. Historians know that Castelli then returned Galileo’s 1613 letter to him, and that on 16 February 1615 Galileo wrote to his friend Piero Dini, a cleric in Rome, suggesting that the version Lorini had sent to the Inquisition might have been doctored. Galileo enclosed with that letter a less inflammatory version of the document, which he said was the correct one, and asked Dini to pass it on to Vatican theologians.

His letter to Dini complains of the “wickedness and ignorance” of his enemies, and lays out his concern that the Inquisition “may be in part deceived by this fraud which is going around under the cloak of zeal and charity”.

At least a dozen copies of the version Galileo sent to Dini are now held in different collections.

The existence of the two versions created confusion among scholars over which corresponded to Galileo’s original.

Beneath its scratchings-out and amendments, the signed copy discovered by Ricciardo shows Galileo’s original wording — and it is the same as in the Lorini copy. The changes are telling. In one case, Galileo referred to certain propositions in the Bible as “false if one goes by the literal meaning of the words”. He crossed through the word “false”, and replaced it with “look different from the truth”. In another section, he changed his reference to the Scriptures “concealing” its most basic dogmas, to the weaker “veiling”.

This suggests that Galileo moderated his own text, says Giudice. To be certain that the letter really was written in Galileo’s hand, the three researchers compared individual words in it with similar words in other works written by Galileo around the same time.

1543 Polish astronomer Nicolaus Copernicus publishes his book On the Revolutions of the Heavenly Spheres, which proposes that the planets orbit the Sun.

1600 The Inquisition in Rome convicts Dominican friar and mathematician Giordano Bruno of heresy on multiple counts, including supporting and extending the Copernican model. Bruno is burnt at the stake.

1610 Galileo publishes his book The Starry Messenger (Sidereus nuncius), describing discoveries made with his newly built telescope that provide evidence for the Copernican model.

1613 Galileo writes a letter to his friend Benedetto Castelli, arguing against the doctrine of the Roman Catholic Church in matters of astronomy. Copies of this letter are circulated.

1615 Dominican friar Niccolò Lorini forwards a copy of the letter to the inquisition in Rome. Galileo asks a friend to forward what he claims to be a copy of his original letter to Rome; this version is less inflammatory than Lorini’s.

1616 Galileo is warned to abandon his support of the Copernican model. Books supporting the Copernican model are banned. On the Revolutions of the He﻿avenly Spheres is withdrawn from circulation pending correction to clarify that it is only a theory.

1632 Galileo publishes Dialogue Concerning the Two Chief World Systems, in which he lays out the various evidence for and against the Church’s Ptolemaic model of the Solar System, and the Copernican model. The Inquisition summons Galileo to Rome to stand trial.

1633 Galileo is convicted on “vehement suspicion of heresy” and the book is banned. He is issued with a prison sentence, later commuted to house arrest, under which lived the last nine years of his life.

Ricciardo uncovered the document when he was spending a month this summer touring British libraries to study any handwritten comments that readers might have left on Galileo’s printed works. When his one day at the Royal Society was finished, he idly flicked through the online catalogue looking for anything to do with Castelli, whose writings he had recently finished editing.

One entry jumped out at him — a letter that Galileo wrote to Castelli. According to the catalogue, it was dated 21 October 1613. When Ricciardo examined it, his heart leapt. It appeared to include Galileo’s own signature, “G.G.”; was actually dated 21 December 1613; and contained many crossings out. He immediately realized the letter’s potential importance and asked for permission to photograph all seven pages.

“Strange as it might seem, it has gone unnoticed for centuries, as if it were transparent,” says Giudice. The misdating might be one reason that the letter has been overlooked by Galileo scholars, says Giudice. The letter was included in an 1840 Royal Society catalogue — but was also misdated there, as 21 December 1618.Another reason might be that the Royal Society is not the go-to place in the United Kingdom for this type of historical document, whose more natural home would have been the British Library.

The historians are now trying to trace how long the letter has been in the Royal Society library, and how it arrived there. They know that it has been there since at least the mid-eighteenth century, and they have found hints in old catalogues that it might even have been there a century or more earlier. The researchers speculate that it might have arrived at the society thanks to close connections between the Royal Society and the Academy of Experiments in Florence, which was founded in 1657 by Galileo’s students but fizzled out within a decade or so.

For now, the researchers are stunned by their find. “Galileo’s letter to Castelli is one of the first secular manifestos about the freedom of science — it’s the first time in my life I have been involved in such a thrilling discovery,” says Giudice.

Get the most important science stories of the day, free in your inbox. Sign up for Nature Briefing