Decades of ongoing research in this region have literally rewritten what scientists know about Mesozoic life, especially about the ecosystems that immediately preceded the final extinction of the dinosaurs. 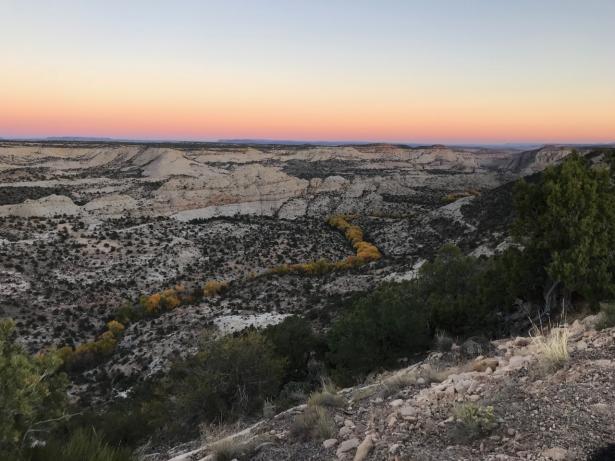 Landscape of Grand Staircase-Escalante National Monument in southern Utah, one of the most abundant fossil fields in the world., P. David Polly, 2018, CC BY-ND

In the early 1980s, paleontologists Jeff Eaton and Rich Cifelli started digging for fossils in one of the most inaccessible regions of the United States: the Kaiparowits Plateau of southern Utah. They were looking not for dinosaurs, but for ancestral mammals. Mammals almost litter the fossil record after dinosaurs became extinct 65 million years ago, but they were rare before then. Eaton and Cifelli ventured onto the Kaiparowits to comb its rocks for mammals’ tiny teeth and bones.

Not only did these two scientists find fossil mammals, they uncovered one of the most complete sequences of vertebrate fossils anywhere in the world from the time when dinosaurs still ruled. What Eaton and Cifelli discovered in Utah showed that life on land was unexpectedly becoming more diverse at a time when life in the oceans was being decimated by chemical changes.

Their work demonstrated the tremendous paleontological potential of the Kaiparowits Plateau and the nearby Circle Cliffs and Grand Staircase regions. Rocks in this remote region span the entire Mesozoic Era – the so-called Age of Reptiles – and by the early 1990s were producing scientifically important fossils from all three of its periods, the Triassic, Jurassic and Cretaceous. 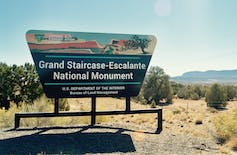 On Sept. 18, 1996, President Bill Clinton set aside these federal lands as Grand Staircase-Escalante National Monument. The goal was to protect their paleontological treasures, preserve their hundreds of archaeological sites and keep one of America’s last wildernesses intact.

Decades of ongoing research in this region have literally rewritten what scientists know about Mesozoic life, especially about the ecosystems that immediately preceded the final extinction of the dinosaurs. Paleontologists like me know that the still-pristine Grand Staircase-Escalante region has divulged only a fragment of its paleontological story.

But the Trump administration has systematically cut entire chapters of that narrative out of the national monument, including key segments of what Clinton’s original proclamation called “one of the best and most continuous records of Late Cretaceous terrestrial life in the world.” The changes not only are at odds with scientific goals for which the monument was created, but researchers contend they endanger the unique natural heritage that belongs to us all.

In the 1906 Antiquities Act, Congress granted the president power to establish national monuments on government land to protect these types of resources. In total, 640 million acres are held in trust for the American people. The majority of this land is available for mixed uses, including wildlife conservation, livestock grazing, mining and petroleum extraction, scientific study and recreation, as mandated by Congress in the Federal Land Policy and Management Act of 1976.

National monuments come into play when historical or scientific resources on those lands are endangered by one or more of those uses or when special attention would enhance them. It was the value of the paleontological resources and the pristine condition of the wilderness around the Kaiparowits Plateau that triggered Bill Clinton’s Grand Staircase-Escalante proclamation in 1996. 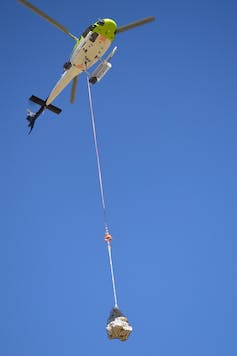 Skeleton of the carnivorous dinosaur Teratophoneus being airlifted out of its excavation site on the Kaiparowits Plateau.               P. David Polly, CC BY-ND

Monument status confers funding through the National Conservation Lands System to restore, maintain and develop designated national heritage resources on federal land. At Grand Staircase, these funds help pay for paleontological field crews, for helicopter lifts of excavated specimens from inaccessible areas and for conservation of those specimens back in the lab. Just as Fort McHenry National Monument in Maryland would not realize its value as a historic site if its buildings were not maintained, so too would Grand Staircase fail to live up to its potential if its fossils were not studied.

The management plan for the original Grand Staircase placed priority on paleontological research. It established the position of monument paleontologist to coordinate field researchers from around the world, to survey and document paleontological sites, and to ensure that fossils collected from the monument are placed in museums and universities where they remain the property of the federal government and are accessible to those who wish to study them.

But now Eaton and Cifelli’s original dig sites are no longer part of the monument. President Donald Trump cut them last December, along with more than 700 other documented paleontological sites. 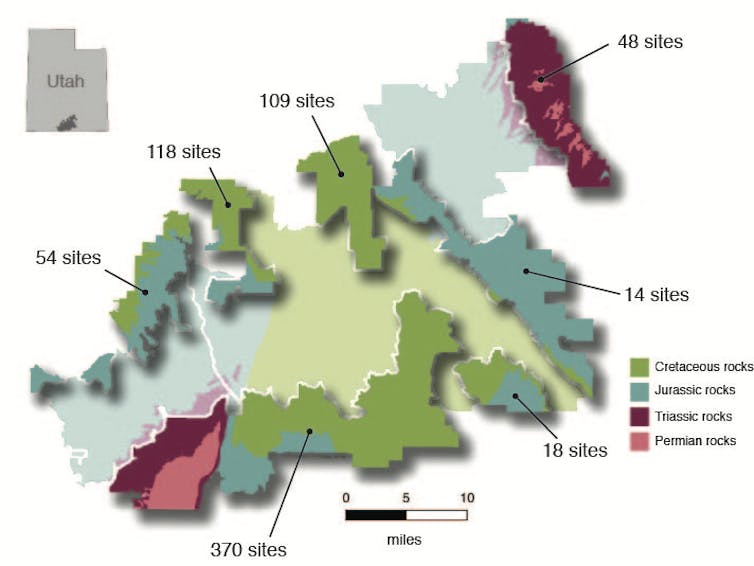 Based on a recommendation by Interior Secretary Ryan Zinke, Trump issued a proclamation that reduced Grand Staircase to almost half its original size. His text asserts that the cuts “take into account” the findings of two decades of paleontological research in order to determine “the smallest area compatible with the proper care and management of the objects of … scientific interest.”

Roughly 1 in 3 of the thousands of sites discovered at the monument have now been excluded. And many more sites remain to be found because large areas have not been fully surveyed. The change in status means that new research in the excluded areas will have lower priority and less support.

In August, the Department of Interior issued a draft management plan for the areas that have been removed from monument, now available for public comment. It offers options that range from protecting paleontological resources with the same rules as before, to actively prioritizing mineral and gas extraction in the excluded areas. The former would be great for science; the latter could be devastating. Some fossil-rich areas of the excluded parts of the monument could be targets for shale gas extraction, others could be singled out for coal or uranium mining.

Depending on the outcome of the current management plan consultation, areas now excluded from the monument may not receive the same priority for conservation and research.

Why ongoing protection is needed

Paleontology, like any science, rests on the principle of verifiability. Science is a process in which scientists revisit old data time and time again to verify earlier findings, to ask new questions and to apply new technology.

The scientific process means that paleontologists routinely return to sites where major discoveries were made in the past. For example, when Tyrannosaurus rex was discovered in 1902, scientists had no way of precisely dating the rocks in which it was found nor did they have any inkling that it was one of the last dinosaurs standing before a massive asteroid crashed into the Earth. Only by applying radiometric dating and rare earth element analysis at those classic sites more than 100 years later have we come to understand the demise of dinosaurs. 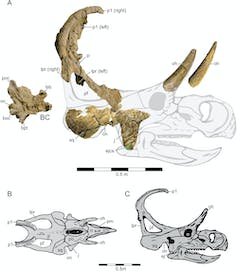 The skull of the new ceratopsian dinosaur Machairoceratops, whose discovery site at Grand Staircase has been excluded from the monument.               Lund et al., 2016, CC BY

Paleontologists work at Grand Staircase because of its unique fossil record, of course, but also because they know the sites will remain intact. Verifiability has become increasingly important; every paleontologist has faced a situation where they cannot answer a pressing question because a key fossil has been misplaced or a critical site has been destroyed.

Scientific ethics dictate that we curate scientifically important specimens in accessible public repositories like museums and do our best to preserve the sites they come from. Places like national monuments and national parks that prioritize protection of fossil sites are therefore prime research areas. That permanent protection has been rescinded from more than 700 sites in active research areas is almost inconceivable to paleontologists.

Because of the potential impact the cuts are likely to have on science, the Society of Vertebrate Paleontology – of which I am the current president – joined with Grand Staircase Partners and Conservation Lands Foundation in a lawsuit to reverse them. The case’s argument is that presidents do not have the authority to unprotect resources at national monuments and that scientifically important paleontological resources have indeed been excised. The case is currently pending in U.S. District Court. 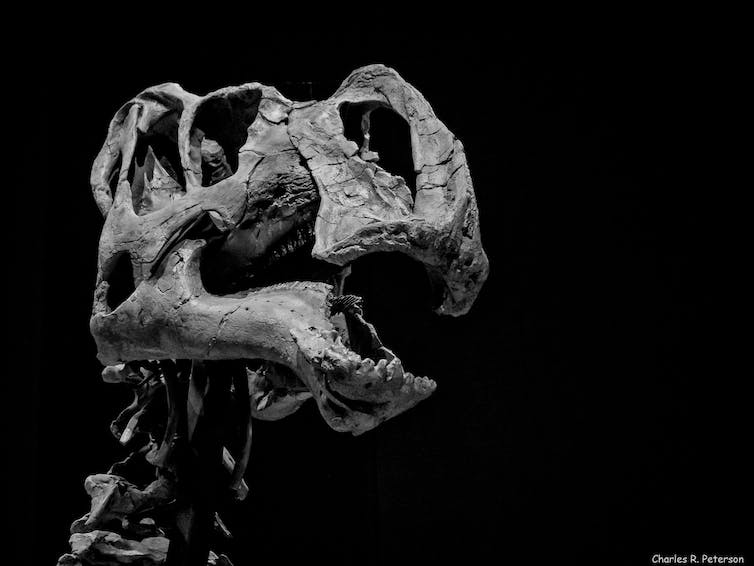 Vertebrate fossils are rare, so much so that each one usually tells a unique part of the story of life. Mammal species like the ones that Eaton and Cifelli discovered in the 1980s were probably spread over much of the continent in the Cretaceous, but precious few of them have ended up in the fossil record and only a few of those have been discovered. Grand Staircase is an extraordinary place with an unusual density of these rare fragments of life’s past, one where their geological context is still intact. That’s why paleontologists are concerned about its future.