Pope Francis and the Battle Over Cultural Terrain

From the outset of his papacy, Francis sought to alter the landscape by vocalizing how capitalism is the primary cause of social injustice. In doing so he became a marked man. We’re witnessing one site in the larger struggle for cultural terrain. 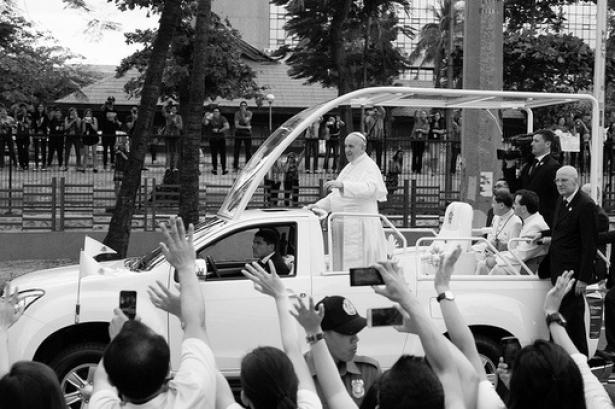 “… [W]e should not be fooled: Much of the organized opposition to Francis has nothing to do with how we care for the divorced and remarried. It is this, his trenchant critique of modern capitalism that keeps money flowing to conservative outlets intent on marginalizing what the pope says.’

So far, we have the still unsubstantiated allegations by Archbishop Carlo Maria Viganò that Pope Francis covered up sex abuses by the now disgraced Theodore McCarrick, the Cardinal who oversaw Washington, D.C. churches from 2001-2006.  Vigano named 32 other senior clerics, all allies of Pope Francis and called for the pontiff’s resignation.

Although I remain highly skeptical of Vigano’s charges, I’m reluctant to draw any hard conclusion at this juncture. And being neither a Catholic nor a believer, I don’t have an ecclesiastical dog collar in this fight. However, my sense is that this matter is far more serious than a civil war within the Church — and that larger context warrants our attention.

Pope Francis has provoked powerful opponents who are outright bigots regarding what the pope terms “below-the-belt issues,” issues that he believes receive far too much attention by the Church. However, according to biographer Paul Vallely, it was Francis’s shift in emphasis to issues of economic justice, that was so “deeply disconcerting to those who sat comfortably atop the hierarchy of the distribution of the world’s wealth.” (P.405) In response to my written query, Villanova University Professor Massimo Faggioli, an expert on Vatican and global politics responded “This is a key issue to understanding the present moment.”

Here it’s important to note that the pope’s radical political metamorphosis preceded his ascension to the papacy.  According to Vallely, it was not until Jorge Maria Bergoglio (the future Pope Francis)  was nearing 50 years old that he fully grasped that capitalism was to blame for making and keeping people poor. And it wasn’t a Saul to Paul on the road to Damascus moment.

Bergoglio had been elected Procurate of Argentina’s Jesuits in 1987 but it was a rocky tenure and he later acknowledged making “hundreds of errors,” including a rigid and authoritarian leadership style that was offputting to his fellow Jesuits. His own journey to a profound personal change began when his superiors in Rome sent him to the Argentine city of Córdoba, a forced exile during which time he was virtually ignored by the Church hierarchy.

During this period of intense soul-searching and close interaction with ordinary people on the street, he gradually underwent an inner transformation and a radically altered political vision. He returned as an auxiliary bishop and in 1998 was named Archbishop of Buenos Aires. Bergoglio’s actions soon earned him the informal title “Bishop of the Slums” while his strong social advocacy which employed the language of Liberation Theology, earned him the intense enmity of Argentina’s most influential economic actors.

Bergoglio became Pope Francis in 2013, the first Jesuit and first non-European to be elected in over 1,200 years. From his first day in office, those who believed he’d follow in the conservative tradition of John Paul II and Benedict were quickly disabused of that notion. From washing the feet of a young female Muslim prisoner to his first visit outside Rome to the “boat people” island of Lampedusa where he expressed solidarity with illegal African economic refugees, Francis sided with the wretched of the earth. But it was his excoriating, systematic critique of global capitalism and free market fundamentalists when he linked symptoms and cause, that alarmed global economic elites:

+In his papal exhortation “Joy of the Gospels,” he wrote “We have to say ‘Thou shalt not kill’ to an economy of exclusion and inequality. Such an economy kills.”

+ He wrote that some people defend “trickle down theories which have never been confirmed by facts…and express crude and naive faith in the goodness of those wielding power.” In his home country, Francis had observed the cruel consequences of IMF policies on the most vulnerable.

+ He described an amoral, throwaway culture where the elderly are deemed “no longer useful” and the poor are “leftovers.”

+ His encyclical, Laudatory si’: On Caring for our Common Home,” named capitalism as a primary cause of climate change and in preparing the document Francis consulted with Brazilian theologian Leonardo Boff, the leading theorist of Liberation Theology.

+ Echoing Dr. Martin Luther King Jr., the pope proclaimed that “Working for a just distribution of the fruits of the earth and human labor is not mere philanthropy. It is a moral obligation. For Christians, the responsibility is even greater. It is a commandment.”

+ Francis directly challenged Washington’s rationale for its war on terrorism by saying that because “the socioeconomic system is unjust at its root, violence and conflict are inevitable.” Further, wars in the Middle East are not about Islam but a consequence of political and economic interests where disenfranchised people turn to desperate measures. He concluded that “Capitalism is terror against all humanity.”

Given the intellectual heft of his argument, the fact of some 1.3 billion Catholics and possessing, arguably, the world’s foremost moral credentials, the pope’s political enemies were at a disadvantage in fighting ideological battles on his turf. While biding their time, as John Gehring noted in The American Prospect, major Catholic businesspersons threatened to withhold sizable financial donations to the Church. Influential Catholics and publishing outlets set out to discredit the revolutionary pope. For example, the Heritage Foundation’s Stephen Moore, a Catholic, wrote in Forbes Magazinethat Francis had “aligned himself with the far left and has embraced a philosophy that would make people poor and less free.”

To obtain a more decisive impact, the pope’s enemies needed to conjure up an issue or wait for one. Vagano’s allegations about a Vatican cover-up either fell or were deposited in their laps. If Francis could be smeared over this matter, his moral authority on matters closer to their hearts would be tarnished. And barring a definitive resolution, doubts could be sown as a default strategy.

Emblematic of these efforts is the friendship between Vagano and OPUS DEI member Timothy Busch, avright-wing, Catholic, California lawyer and businessperson. The August 27, 2018 issue of The New York Times reported that Busch advised Vagano on the letter prior to its publication. Busch also sits on the Board of Governors that own the National Catholic Register, one of the first outlets to publish Vagano’s 8,000 word, 11-page letter, entitled “Testimony.” Conservative Catholic journalists acknowledged helping to prepare, edit and distribute the letter. In the meantime, digital Catholic media hostile to Francis worked overtime to undermine him.

The contrast between Francis and Busch couldn’t be more stark. On the one hand, Francis asserts that the manner in which those who run the financial system are trained, favors the “advancement of business leaders who are capable, but greedy and unscrupulous.” On the other hand, the Catholic University of America (CUA) in Washington,  D.C, recently renamed its business school the Tim and Steph Busch School of Business after receiving a gift of $15 million from the Busch Family Foundation. Five other donors brought the total to $47 million.  Among them was the Koch Family Foundation which chipped in an additional $10 million even though Koch readily admits he’s not religious, is pro-choice and approves of same sex marriage. Busch also persuaded Art Ciocca, CEO emeritus of The Wine Group to ante up another $10 million.

In announcing his gift, Busch said it was to help “show how capitalism and Catholicism can work hand in hand” and he wrote an complementary op-ed in The Wall Street Journal entitled “Teaching Capitalism to Catholics” in which he claimed that free markets are buttressed by moral principles taught by the Catholic Church. In a speech to CUA students, as reported in the Catholic Standard, Busch noted that as the only pontifical university in the United States, “We’re the pope’s business school” and later added,  “We realized that a professor in a business school can impact 100,000 students in his or his lifetime.”  To the influential, conservative Catholic organization, Legatus: Ambassadors for Christ in the Marketplace, Busch told 160 well-heeled members that the business school’s mission is to “impact how students think.” Note: Lest anyone question his motives, Busch said “The focus of my life is getting myself into heaven and to help others get there.”

Busch, along with Fr. Robert J. Spritzer, S.J., also co-founded the Napa Institute, which promotes a mix of free-market economics and theology. Among its goals is to “continue the work of the Apostles and their successors.”  Napa hosts hundreds of wealthy Catholic philanthropists at its annual gathering where they hear lectures from conservative bishops, philosophers and theologians.  In a September 5, 2018, letter to Napa’s “constituents,” Busch denied any involvemnt in Vagano’s letter but otherwise has not responded to further requests for comment. He also encouraged “constituents” to attend Napa’s upcoming conference on how to exert lay person influence on the Vatican.

In closing, Antonio Gramsci, the twentieth-century Marxist, explained  that culture, class and politics are inextricably intertwined. Powerful groups seek to influence culture with the human mind as the target. From the outset of his papacy, Francis sought to alter this landscape by vocalizing how capitalism is the primary cause of social injustice. In doing so he became a marked man. We’re witnessing one site in the larger struggle for cultural terrain, a battle occurring on many levels, including the Catholic Church.