tv The Good Place Is Really About Rethinking Policing and Prisons

The Good Place asks a moral question that’s unusual for TV: what’s the point of jail? 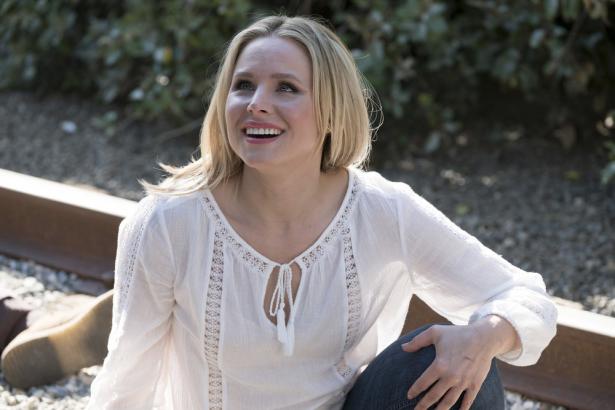 Significant spoilers ahead for episodes of The Good Place that have already aired.

The Good Place is a rare television phenomenon: a show that suggests prison is evil and cops are bad.

Part of the way the show gets away with that thesis without getting the kind of pushback afforded to movements like Black Lives Matter is because it doesn’t seem to be about cops or prison at all. The show, which just launched its third season, is a high-concept fantasy sitcom about the afterlife. Eleanor Shellstrop (Kristen Bell) is killed in a tragic shopping cart accident and wakes up in what she believes is heaven, aka “The Good Place.” She appears to be there because of a bureaucratic slipup: they think she’s a crusading human rights lawyer rather than a selfish jerk.

Eventually, Eleanor and her friends realize they aren’t in The Good Place at all. Heaven (frozen yogurt stands and all) is an elaborate ruse where demons disguised as friendly neighbors torture unsuspecting souls by playing on their fears and insecurities for all eternity. In the season 3 premiere, Eleanor and her companions, aided by the reformed demon Michael (Ted Danson), are sent back to Earth with their memories erased so they can try to become better people who are worthy of going to the real Good Place.

The magical setting and innumerable plot twists are distractions, but the fact remains: The Good Place is about crime and punishment. Eleanor is literally a crook; her job before she died was selling worthless medicine to the elderly. One of her friends, Jason Mendoza (Manny Jacinto), is a hapless petty thief who died while trying to commit a robbery. (He locked himself into a safe, but forgot to drill air holes.)

In the bulk of television programming that deals with law and order, Eleanor and Jason wouldn’t be protagonists. They’d be the people the protagonists bring to justice. They could easily wind up passing through the precinct in Brooklyn Nine-Nine (another show created by Good Place mastermind Michael Schur) or getting put through a grueling interview as part of a bigger case by Sherlock and Joan on Elementary. They’d probably end up going to jail for their crimes because that’s what happens to criminals when they’re caught. On cop shows, bad guys do bad things, and good guys catch them and punish them. That’s justice.

But in The Good Place, punishment and justice don’t have much to do with each other. Eleanor and her companions are all awful people in their own ways. Moral philosopher Chidi Anagonye (William Jackson Harper) is so intent on doing the right thing that he’s unable to make any decisions. Tahani Al-Jamil (Jameela Jamil) is a wealthy heiress who is obsessed with impressing others and being more famous than her sister. They’re often infuriating, dumb, and cruel in hilarious ways. But do they really deserve to be consigned to eternal torment? Is being a jerk or a petty thief really an unforgivable sin?

To be fair, no one running the universe in The Good Place actually seems to believe that Eleanor, Chidi, et. al. deserve to experience apocalyptic horrors as a punishment for their crimes. Michael the demon and his cohorts don’t really care about their captives’ sins at all. Michael is focused on securing a better position for himself in the bureaucracy. His minions enjoy torture for its own sake — though they prefer the tried-and-true “pitchfork and eye-gouging” approach, rather than Michael’s new-fangled idea of having damned souls torture each other through petty interpersonal conflict. 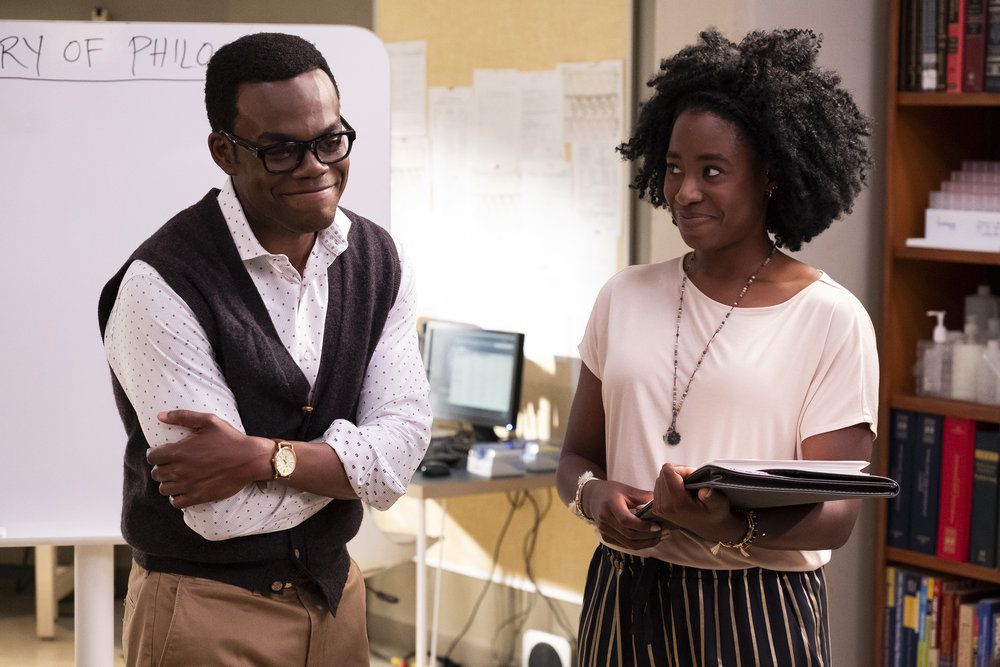 Even the all-powerful Judge Hydrogen (Maya Rudolph) who shows up at the end of season 2 is cavalier about issues of sin and redemption. “I try to learn as little as I can about the events of humankind, so I can remain impartial because I’m a judge. Yadda, yadda, yadda,” she tells a nonplussed Chidi. The judge rules on everyone’s worth, but she doesn’t actually care about them or know much about them. Her fairness is indistinguishable from callousness, especially since it isn’t clear what purpose her punishments are supposed to serve in the first place.

The pointlessness of The Good Place’s punishments — which serve no moral purpose — is the show’s most radical choice. Sometimes police in cop shows are bad people; The Wire goes further and presents bad cops as navigating and manipulating a flawed, corrupt system. But almost all cop shows agree, one way or the other, that police are doing important work. They foil murderers, serial killers, kidnappers, terrorists, thieves, and drug dealers. Brooklyn Nine-Nine is a lighthearted series with fairly low stakes, but the show never questions the idea that the cops are making the streets safer. Even Orange is the New Black, which largely takes place in a women’s prison and openly sympathizes with the inmates, still presents many of its prisoners as genuinely dangerous. There’s a logic to trying to restrain them, even if the show criticizes the methods used.

But the eternal punishment of The Good Place doesn’t make streets safer. Jason Mendoza was largely incompetent as a thief when he was alive. Dead, he’s significantly less of a threat. The only reason to keep hurting someone after they’re dead is sheer sadistic pleasure in cruelty. The punishment in The Good Place also isn’t meant to benefit its prisoners. They’re dead, and their moral journey is over. They can’t get better.

Eleanor does get better. But that’s not because of her jailers; it’s despite them. She gets Chidi to promise to teach her about moral philosophy and, more importantly, to be her friend. Chidi, Jason, and Tahani all start to care about each other and shed some of the selfishness, which, at bottom, is the essential sin all four share. They even end up helping Michael the demon learn to be a better creature. And he, in turn, in season 3, sneaks down to earth to try to get them to morally improve. The prison warden dedicates himself to the welfare of his prisoners — even though if he’s caught, he will be dismembered and tossed onto the face of a burning sun forever.

The setup of The Good Place encourages viewers to put the moral choices Eleanor, Chidi, and the others make under a microscope. But the striking thing about the first episode of the third season premiere is the amorality of the afterlife. The protagonists all struggle on Earth to be better people following near-death experiences. Eleanor’s decision to do good gets her kicked out of her apartment, bleeding money, and subjected to a frivolous lawsuit. 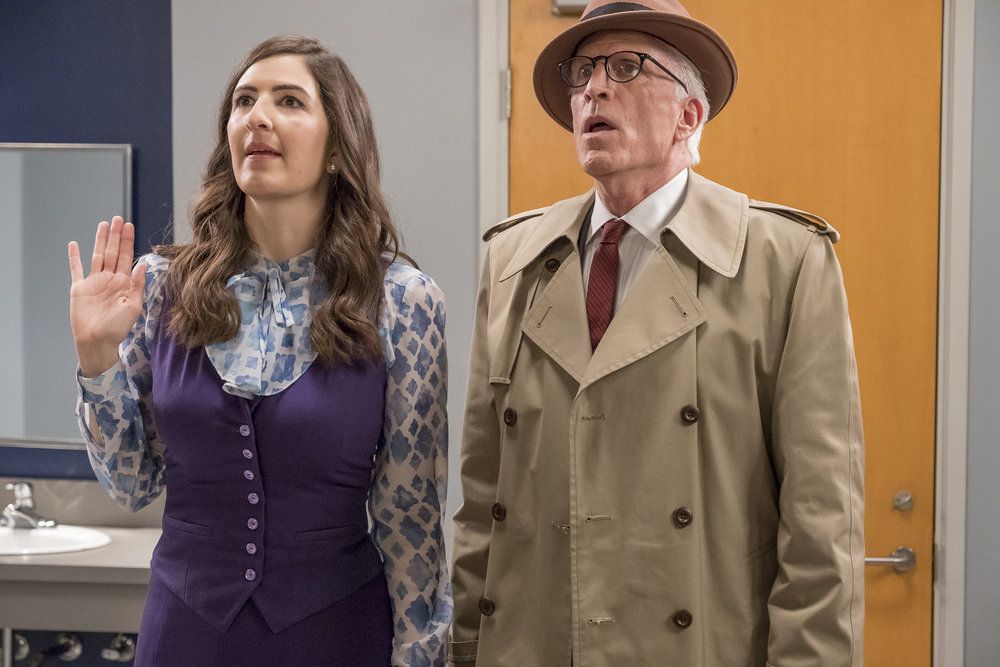 Meanwhile, in the afterlife, Shawn the demon (Marc Evan Jackson) cheerfully encases his minions in painful punishment cocoons when they fail to perform their evil tasks adequately, when they talk back to him, or just when he feels like it. Eleanor may be a bad person, but her judges are literally monsters. And if the audience is judging her, they’re implicated, too.

Television shows — especially cop shows — do often ask the viewers to sit in judgment. The audience is meant to cheer as cops or detectives uncover iniquity and immorality. We’re supposed to feel relieved when the threats to society are safely interred in some offscreen steel box where they can’t hurt anyone except other bad people whose welfare doesn’t count.

The Good Place, though, asks its fans to interrogate the morality — not of the imprisoned, but of the forces that want to lock them away, out of sight and mind. Do we imprison people to help them become better human beings? Or do we imprison them because, like the demons, we get pleasure out of moral superiority and having power over those we’ve dismissed as beneath us?

Prisons, both on and off television, are a primary means of enforcing morality and achieving justice. They’re where we separate wrong from right. They’re how we bring our plot arcs to a satisfying resolution. It’s as though society has designated prison as a form of The Good Place where debts are paid and stories end righteously. But maybe, the show suggests, the truth is more complicated, and society needs to rethink whether it’s possible for prisons to help criminals reform, learn morality, or otherwise improve themselves. Maybe they’re just The Bad Place where the punishments are arbitrary, cruel, and incapable of creating meaningful change.