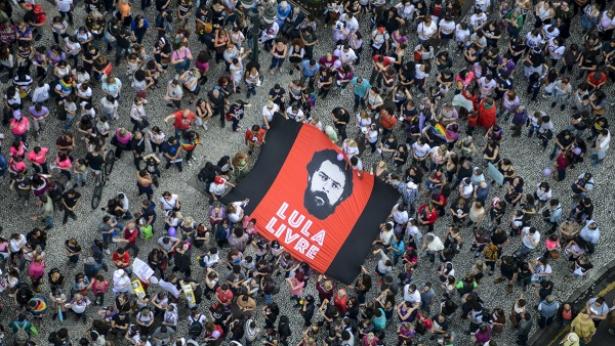 Freedom for Lula is written on a poster during a demonstration against the extreme right-wing candidate Bolsonaro. ,Henry Milleo/Getty Images

This election is marked by the class struggle: For a project that combines the most conservative sectors of our society and international capital, against the workers’ project.

One of the most significant political prisoners of the current period is kept in isolation so that the “soft coup” in Brazil can proceed on course.

The sovereignty of the people, its political sovereignty, is the challenge of our time. For this sovereignty runs against today’s capitalism: a financial and transnational capitalism that can only develop precisely by removing rules and controls.

With the second FMLN administration nearing its end, a third term after next year’s presidential vote is very much in doubt.

Effective socialist economic and social restructuring of Britain cannot be realised without open discussion of the need to turn the whole financial system into a public utility.

India and Sri Lanka, and indeed South Asia, are connected in the fight for social justice. We share the same oppressive law (Sec. 365 and 365A, Sri Lankan Penal Code), and we were part of the fight to change it.

Austrians return to the streets each Thursday to voice their opposition to the ‘crypto-fascist’ Kurz government.