The Abrams campaign expected voter suppression, had organizations in place to combat it and, at least mathematically, has a path to victory that assumes thousands of voters might be purged and not find out until Election Day. 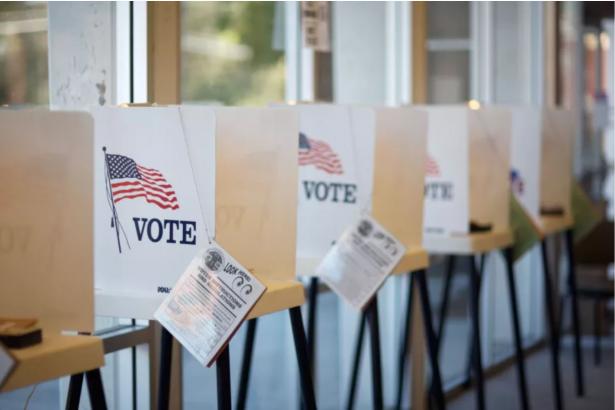 “For YEARS I’ve been trying to get people to give a shit about ‘Exact Match,’ before the day after the voter-registration deadline,” says a Georgia Democratic campaign staffer, who wished to remain anonymous.

The exasperation in their voice is obvious. Exact Match is the gentrified name for Georgia Secretary of State Brian Kemp’s anti-black voting apparatus, which he’s wielded with such efficiency that Jeff Sessions is jealous.

Even though Kemp is in a close election with Democrat Stacey Abrams for the governor’s mansion in Georgia, he’s still allowed to oversee the election as secretary of state (Abrams’ camp just called for Kemp to resign as secretary of state). Exact Match allows the state to purge voter registrations if the voter registration has any differences—no matter how small—from other state documents. For example, if your gun license says “Kanye West” and your voter registration says “Kanye Omari West” and your marriage license says “Kanye O. West,” even if everything from Social Security numbers to tax forms and previous overrated albums all lineup, Brian Kemp will snatch your application.

This process was already settled by the courts in 2017, because over 63 percent of the voter registrations that were canceled were from minority applicants. Strangely, over 70 percent of those who have been removed from the rolls are African American. Yet, thanks to the Republican-dominated state legislature in Georgia, Exact Match is back, and over 53,000 voter registrations are on hold just under 30 days before the election.

Calling this labyrinth of voter blockages the new Jim Crow doesn’t do it justice. It takes a special kind of white man to basically admit that he can’t win an election in a Republican state against a black woman without cheating. You could call it Brian Crow but I don’t think Kemp would want to be that close to anything so black.

As secretary of state, Kemp has waged war against nonpartisan voting rights organizations like the New Georgia Project, purging over 600,000 voters from the rolls since 2017 (without informing anyone) and routinely shutting down or changing the voting locations in Georgia’s rural black counties. Now, this is usually the point in the story where readers get mad, then despondent and frustrated. Here we go again, black voters are about to get screwed over and the Republicans will be victorious again. Why, oh, why don’t the Democrats ever learn??? Why are Democrats still playing Uno while Republicans are stacking books in Spades?

Maybe it’s because there are more African Americans and people of color working on the ground in Georgia than in the past; maybe it’s the existential threat of Donald Trump; maybe people have just learned their lessons. Whatever the reason, this time, black folks in Georgia are prepared.

“Our path to victory isn’t contingent on the registration of new voters,” said the Democratic staffer I spoke to. “Victory is on low propensity-existing voters. People who maybe voted for Obama or the mayor but not anybody else. They’re there, you just have to activate them. I say this all the time—people have always made the erroneous assumption that to win, you have to register all these new thousands of people. That is important, but a lot of it is just getting out the people who are already registered.”

In other words, the Abrams campaign and African-American activists on the ground knew that Kemp’s voter suppression tricks were coming and were prepared. Their election success map assumes a certain percentage of votes being lost to suppression tactics. On top of that, there are teams of election lawyers in every single competitive county in Georgia ready to strike on behalf of voting rights. Over a million absentee-ballot applications were sent out weeks ago with the idea being that they can be sent in and counted before someone would know they’ve been purged and to avoid any Election Day shenanigans that Kemp is likely to pull.

“A lot of these—I just say white organizations—keep trying to register new voters; sometimes it’s a bit of a scam, actually. I mean, registering new voters is important but a lot of it is about getting people who don’t vote often to vote more consistently. Like black folks,” said a campaign veteran 0f several southern statewide campaigns.

Stacey Abrams saw all of this coming years ago, as soon as the Supreme Court gutted the Voting Rights Act in 2013. She and other black politicians throughout the South knew that the only way to combat the new wave of voter suppression was to launch organizations like the New Georgia Project, which would be focused on registering black voters, 24 hours a day, seven days a week and not just showing up on the Sunday before Election Day with a song and a dance.

The Atlanta Journal-Constitution has consistently attacked Abrams for her time with the New Georgia Project, implying that the organization was created to raise her profile ... which is akin to calling somebody stingy for saving money because they knew they were buying a house in four years. Mind you, this is the same Atlanta Journal-Constitution that considers white nationalists to be just as bad as socialists, so what do you expect?

Just to recap, the Abrams campaign expected voter suppression, had organizations in place to combat it and, at least mathematically, has a path to victory that assumes thousands of voters might be purged and not find out until Election Day. Does that mean that all of the breathless coverage of Brian Crow’s vote discrimination is unnecessary? Does that mean the Abrams campaign logo is a nice brown hand holding up voters with the phrase “We Got Ya’ll” emblazoned across the front? Of course not. There is still a ton of work to do, but it does mean even in the midst of structural racism, all is not lost.

“[Kemp]’s getting desperate; that’s why he’s doing this,” says LaTosha Brown, whose organization, Black Voters Matter, helped put Doug Jones into the Senate last year from Alabama’s special election. “They pull this same trick in other places like Alabama; the difference is that Georgia is a purple state; there are enough voters to flip the state house, so they get more aggressive.”

The Abrams campaign is threading the needle between reminding voters that there is a plan to protect their votes and getting them to the polls, and also not giving anybody the impression that it’s time to start chanting “Georgia Got a Governor Named Stacey” before Nov. 6. 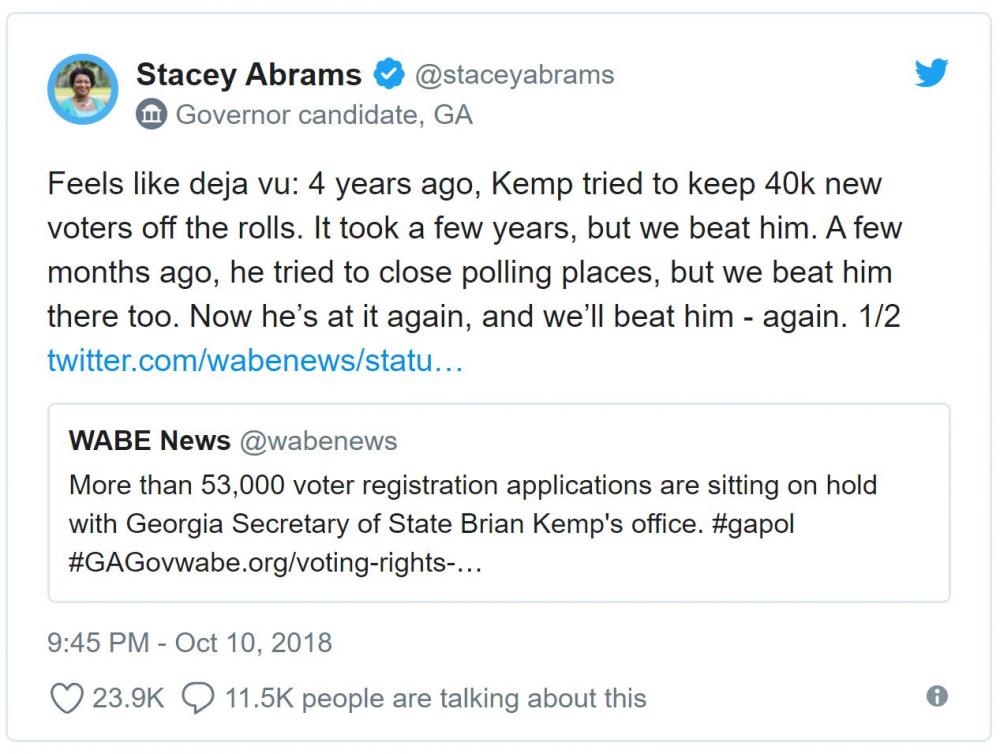 “We’re more worried about folks who think we’ve got it in the bag,” said the Georgia Democratic staffer. “We’re worried about the black people who think—‘Oh, she’s got this, so we’re good.’ NO! We need every single African American in the state of Georgia to vote. If they do, we can win this.”

If they don’t, Brian Kemp will win with overt cheating and racism, and that man doesn’t need anything else to crow about.