To Secure Peace Between the Koreas, US Must Declare an End to the War

We must help bring closure to the longest-standing US conflict now. President Moon is in office for just over three years, and South Koreans’ desire for a formal end to the Korean War is our greatest asset. 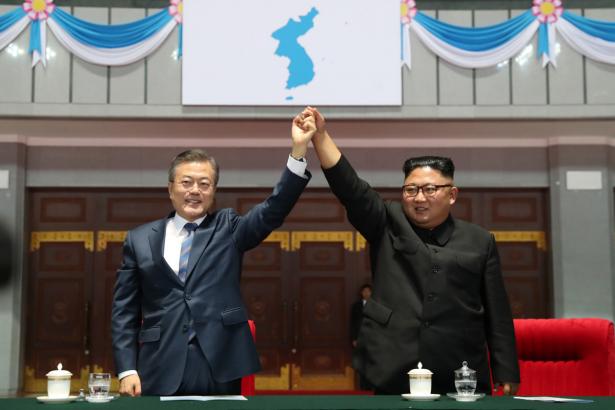 A historic opportunity to end the seven-decade Korean War is suddenly within reach. The world witnessed world-class peacemaking between North and South Korea last week at the third inter-Korean summit in Pyongyang as North Korean leader Kim Jong Un and South Korean President Moon Jae-in declared “a Korean Peninsula free of war” and “a nuclear-free Korean peninsula.” But peacemaking between the two Koreas alone is not enough: The success of this process also rests on progress between Washington and Pyongyang, and particularly on the signing of a peace treaty to end the Korean War.

To a packed audience of 150,000 North Koreans wildly cheering on their feet on September 20 at the May Day Stadium in Pyongyang, President Moon affirmed, “We have lived together for 5,000 years and been separated for 70 years. We must live together as one people.”

At their summit, Kim and Moon announced a long list of actionable steps they will take to improve relations, from establishing a reunion center for divided families to reopening the Mt. Kumgang tourism center and the Kaesong industrial zone — two inter-Korean development projects from the previous Sunshine Policy years that were shut down as relations worsened between the two Koreas during the previous two hardline administrations. The defense ministers also agreed in a separate military agreement to reduce military tensions by downsizing the number of guards near the Military Demarcation Line, the border dividing North and South Korea in the De-Militarized Zone (DMZ) established by the Armistice Agreement in 1953. The Korean leaders also agreed to de-mine a village in the DMZ surrounding the border between North Korea and South Korea.

As part of the Pyongyang Declaration by the two Koreas to transform the Korean Peninsula “into a land of peace free from nuclear weapons and nuclear threats,” Kim committed to “permanently dismantle the Dongchang-ri missile engine test site” in the presence of international inspectors, and “the permanent dismantlement of the nuclear facilities in Yongbyon.” But this would depend on “corresponding measures” by the United States “in accordance with the spirit of the June 12 US-DPRK Joint Statement.”

Trump last month canceled Secretary of State Mike Pompeo’s trip to North Korea, saying North Korea had not made “sufficient progress” toward denuclearization. North Korean leaders, however, say the United States hasn’t honored its end of the Singapore Declaration in which the first two items were to improve relations and establish a peace process. Denuclearization came third, and the repatriation of the remains of US service members was a last added item.

Pyongyang has already made several concessions: It has halted missile and nuclear tests, begun to dismantle the Sohae missile launch site and destroyed the Punggye-ri nuclear test in the presence of foreign journalists, released three detained Americans, and repatriated the remains of US service members from the Korean War. The United States, meanwhile, has halted one joint military exercise after Trump’s spontaneous announcement at the press briefing following his meeting with Kim. But these joint exercises could easily be resumed.

North Korea has made clear that denuclearization will require a peace process that includes concrete steps toward a Peace Treaty, as promised in the 1953 Armistice Agreement signed by the United States, North Korea and China. James Laney, a former US ambassador to South Korea under Clinton, has argued, “A peace treaty would provide a baseline for relationships, eliminating the question of the other’s legitimacy and its right to exist. Absent such a peace treaty, every dispute presents afresh the question of the other side’s legitimacy.”

But North Korea is unlikely to unilaterally surrender its nuclear weapons without improved relations. We knew that the Clinton and Bush administrations were close to waging a pre-emptive strike on Pyongyang, but now Bob Woodward’s book Fear has also confirmed that even President Obama weighed a first strike on North Korea. Kim has seen what happened to Iraq, Libya and Iran, not to mention his own country’s experience of a devastating US bombing.

Most Americans have no idea that in just three years, the Korean War claimed over 4 million lives. The US dropped 635,000 tons of bombs on Korea, more than it did in the rest of the Asia-Pacific in WWII combined, and it used 33,000 tons of napalm in Korea — more than in Vietnam. Curtis LeMay, a US Air Force general in the Korean War, testified, “We burned down just about every city in North Korea and South Korea … we killed off over a million civilian Koreans and drove several million more from their homes.” The US’s indiscriminate bombing campaign leveled 80 percent of North Korean cities, killing one out of every four family members. The bombing of homes was so devastating that the regime urged its citizens to build shelter underground.

On July 27, 1953, the Korean War ended in a stalemate with a ceasefire. Military commanders from the US, North Korea and China signed the Armistice Agreement and promised within 90 days to return to negotiate a peace settlement. Sixty-five years later, we are still waiting for that Peace Treaty to end the Korean War.

A peace treaty would end the state of war between the United States and North Korea, taking the threat of a military conflict off the table. A ceasefire — a temporary truce — is what has defined the US-North Korean relationship.

One tangible step that the Trump administration can take that the North Koreans would view as a “corresponding measure” is to declare an end to the Korean War. Joseph Yun, the former State Department envoy to North Korea during the Obama and Trump administrations, has said “the end-of-war declaration has to be done.” In an interview with the Asahi Shimbun, Yun said, “I don’t agree that [the US] would lose any significant item by saying the war has come to an end.” This would demonstrate the US commitment to improve relations and establish trust as a key toward normalizing relations between the two countries. “I think the opening reciprocal liaison offices would be a strong signal to North Korea that the United States is willing to change the relationship and willing to take steps towards normalization,” Yun said.

Henri Féron, a legal scholar at Columbia Law School, has argued that “a peace treaty is a versatile instrument that can be tailored to further US and South Korean interests in addressing the security challenges posed by North Korea.” Féron adds that several UN organs have called for the replacement of the Korean War Armistice Agreement, “including the General Assembly, the President of the Security Council, the Secretary-General and even the Commission of Inquiry on Human Rights in [North Korea].”

Despite tremendous progress by the two Koreas toward formally ending the Korean War with tangible steps toward reunification, Vincent Brooks, Commander of the US Forces in Korea, recently blocked an application by South Korea to allow a train to travel across the military demarcation line to test the rail lines from Seoul to Sinuiju. Brooks is also head of the “UN Command which oversees the armistice,” which many have come to believe is the United Nations. Perhaps in an effort to deflect pressure on the UN for blocking progress between the two Koreas, in a September 17 Security Council briefing, Under-Secretary General Rosemary DiCarlo clarified, “Notwithstanding its name, the “United Nations Command” is not a United Nations operation or body, nor does it come under the command and control of the United Nations. Furthermore, it was not established as a subsidiary organ of the Security Council and is not funded through the United Nations budget.”

The US also tried to block the opening of a diplomatic office in Kaesong. According to the Chosun, a conservative paper in South Korea, an unnamed US official warned, “If the [South] Korean government opens a liaison office in Kaesong, [South] Korea will risk violating sanctions that have drawn North Korea back to the negotiating table.” But the Koreans plowed forward and on September 14 opened the liaison office, which will facilitate year-round communication between Seoul and Pyongyang.

While the prospect of undoing 70 years of mistrust and propaganda may seem daunting and impenetrable, it isn’t. The greatest enemies to peace are apathy and the belief that we can’t overpower those wanting perpetual war.

It was the Korean War, after all, which inaugurated the Cold War and the military industrial complex. According to Korea historian Bruce Cumings, “The Korean conflict was the occasion for transforming the United States into a very different country than it had ever been before, one with hundreds of permanent military bases abroad, a large standing army and a permanent national security state at home.”

Korea expert Gregory Elich wrote in the Monthly Review, “As Dean Acheson, Secretary of State under President Truman, put it, the Korean War ‘came along and saved us.’ It made possible the quadrupling of the defense budget under Truman, and brought about final approval of National Security Council Report 68, which triggered the Cold War and militarized American policy.” The Korean War also cemented the idea of the US as the world’s police officer.

We must help bring closure to the longest-standing US conflict now. President Moon is in office for just over three years, and South Koreans’ desire for a formal end to the Korean War is our greatest asset. Eight of 10 South Koreans support the Pyongyang Summit.

As James Clapper, the former director of the Central Intelligence Agency in the Obama administration told journalist Tim Shorrock from The Nation, “The two Koreas have every right to move ahead like they are, even if people here [in Washington] don’t like it.” Even The New York Times editorial board is now arguing that “ending the formal state of war 65 years after the fighting ceased should not be that difficult, even if the ultimate goal — ridding the world of the threat from North Korea’s nuclear arsenal — remains elusive.”

Americans should stand with Koreans to help end the war with a Korea Peace Treaty and unite the Korean peninsula. It is the just and moral thing to do.

Christine Ahn is the international coordinator of Women Cross DMZ, a global movement of women mobilizing for peace on the Korean Peninsula.

Support Independent Journalism. Truthout is a nonprofit and depends on your financial support.